Marine heat waves are warm anomalies persisting for days to months and on spatial scales from 1-1000 km (Hobday et al., 2016). These heat waves disturb the marine environment and may have significant feedbacks on the atmosphere. Recent studies suggest that the New England continental shelf is increasingly impacted by Warm Core Rings (WCR) initiating from the Gulf Stream. Gawarkiewicz et al 2019 describe a strong marine heatwave in early 2017 that was apparently initiated by a WCR intrusion onto the shelf.

The first indication of the 2017 heatwave was from a Rhode Island fisherman who noticed unusual species (typically found in Gulf Stream waters) in his catch from the New England shelf. This indicated unusually warm waters on the shelf, and researchers began to investigate the regional extent. A number of different data sources, including OOI Pioneer Array assets, were necessary to track the anomalies along the length of the Middle Atlantic Bight (MAB).

Temperature anomalies measuring up to 6 C and salinity anomalies exceeding 1 PSU were found. The duration of the heatwave was approximately 4 months, initiating near Nantucket Shoals in Jan 2017, traversing the entire MAB, and dissipating offshore of Cape Hatteras in April. The advective path of the heatwave extended roughly 850 km.

Comparison with historical records from 1940 to 1996 showed that the 2017 heatwave was an unprecedented event in terms of temperature and salinity anomalies. The heat wave had significant impacts, including shoreward shift of the shelfbreak front, lowered chlorophyll concentrations, and the presence of warm water fish in New England coastal waters. 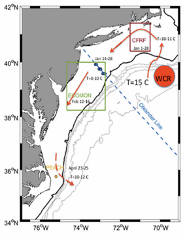 Location of the Warm Core ring and the path of the heat wave. From Gawarkiewicz et al. (2019).