Remarkable changes in seafloor topography and biological communities, quantification of methane flux, and connections from the seafloor to upper water column methanotrophy.

Southern Hydrate Ridge (SHR) is one of the most active and dynamic methane seep sites known. Repeat investigations during Regional Cabled Array (RCA) cruises show that it is highly dynamic, delineated by exceptional changes in seafloor morphology, venting intensity and temporal variability, and by the distribution and density of associated biological communities (Fig. 1) [1-6]: here, AI is being utilized to quantify the areal extent of seeps and classification of organisms [4,7]. Since first imaged in 2010, the summit of SHR has changed remarkably with areas of smooth, gentle hummocks transformed into extensive, highly rugged and steep-sided collapsed pits from which jets and explosions of bubbles occur (Figs. 1c-h). Equally dynamic are changes in the locations and thicknesses of microbial mats that mark more diffuse seepage of methane from the seafloor. Surprisingly, chemical results from continuous measurements from RCA flow meters show an annual net transport of fluid downward into the sediment resulting in the development of new transport models for these seep environments [8]. At the focused RCA experimental site “Einsteins’ Grotto” and at a site to the north, hydrate is exposed at the seafloor within the collapsed pits (Fig. 1d).

Because of OOI, SHR is one of only three places (the others being Ocean Networks Canada Barkley Canyon and Clayoquot Slope sites) in the oceans where time series investigations of methane release are conducted at hour to year time periods utilizing ship and RCA PI cabled multibeam sonars, cameras and an upward-looking ADCP [2, 5-6, 9-11]. Results from a 3-year investigation of SHR show that the locations of seep activity and bubble release remained unchanged, however, the magnitude of gas release was highly variable on hourly time scales (Fig. 1a) [2]. Bubble plumes rise up to ~480 above the seafloor and in several cases exceed the upper limit of hydrate stability by ∼190 m. Here, shallow subsurface waters, where methane disassociates, is marked by high density regions of lantern fish, consistent with increased biological activity associated with the microbial oxidation of the released methane (Fig. 1a) [2].

As a key cabled site on the RCA, SHR has attracted numerous national and international investigators including a several year program funded by the German Federal Ministry of Education and Research to quantify methane flux from the highly active Southern Hydrate Ridge RCA site (G. Bohrmann and Y. Marcon, MARUM, University of Bremen, Germany; “Sonar monitoring of natural release of methane greenhouse gas from the seafloor – A contribution to the understanding of global change.”). In 2018, it was mapped at submeter resolution and the entire site photo mosaicked as part of a Schmidt-funded program (B. Thornton, University of South Hampton). Cabled infrastructure now installed as part of the MARUM project includes an overview multibeam sonar that completes a 360° scan every 2 hrs and spans a distance of 700 m, imaging all sites of bubble plume emissions at SHR (Fig. 1b) [5-6; 10-11]. Other infrastructure includes a multibeam, very high-resolution sonar that quantifies bubble emissions from Einstein’s Grotto, a 4k video and digital still camera that takes 3 images each hour of the explosive hydrate-bearing site – Einsteins’ Grotto (Fig. 1h), and a CTD to examine the impacts of ocean warming and release of methane into the hydrosphere. Automated plume imaging is now utilized for time-series hourly imaging by the RCA digital still camera [5-6]. The images, available through the OOI Data Portal, document remarkable changes of the collapse pit over time and in associated biology. 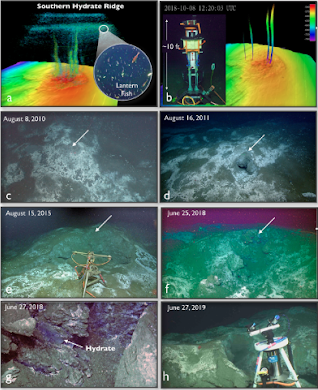 Figure 1. a) Multibeam sonar imaging of methane bubble plumes rising from the summit of Southern Hydrate Ridge. A subsurface strong scattering layer is associated with the depth at which methane hydrate disassociates and is collocated with a high density zone of lantern fish. b) the MARUM overview plume sonar scanning every 2 hrs a 700 m across swatch c-f , time series ROV images of the Einstein Grotto site; note no blow-out pit was present in 2010. The RCA digital still camera, shown in e, images the site every hour. g. Exposed methane hydrate in the collapse pit at Einstein’s Grotto. h. the MARUM cabled 4k video and digital still camera installed at Einstein’s Grotto in 2019