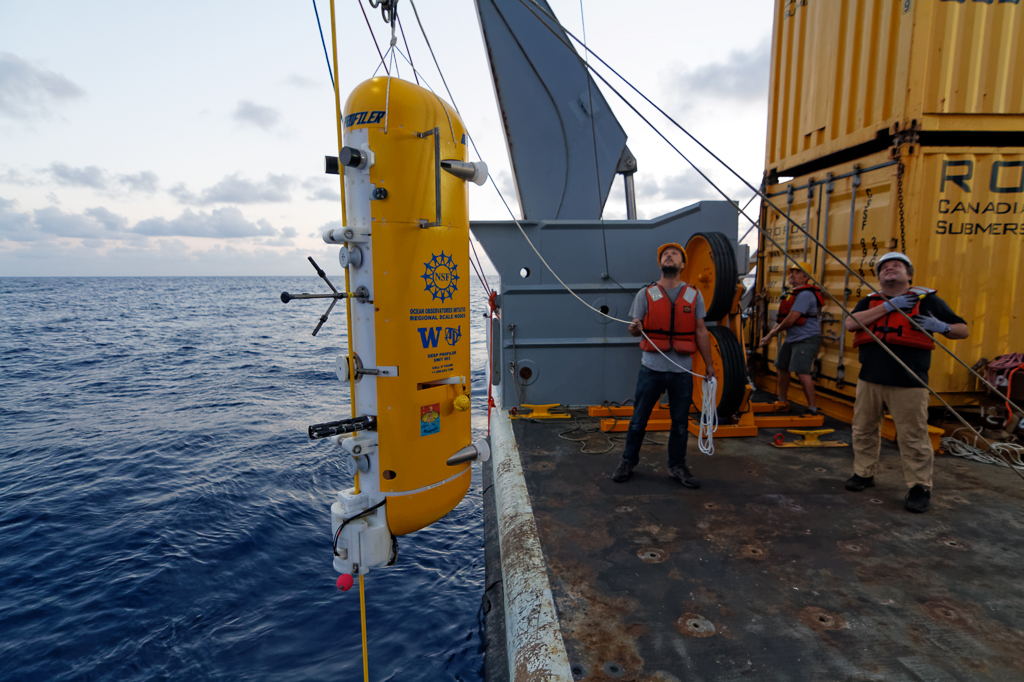 An RCA instrumented Deep Profiler will be one of 200 instruments recovered or deployed during the month-long expedition. Credit: M. Elend, UW, V14.

The University of Washington (UW) Regional Cabled Array (RCA) team entered a two-week quarantine period on 16 July before heading out to sea August 1, aboard the UW global class research ship the R/V Thomas G. Thompson for a month-long expedition in the northeastern Pacific. The expedition is funded by the National Science Foundation as part of the Ocean Observatories Initiative. The team will need whatever rest they can muster during the quarantine, as the expedition promises to be replete with round-the-clock activity, including multiple dives a day by the remotely operated vehicle (ROV) Jason.

During this expedition, the team will recover and reinstall more than 200 instruments with the ROV, while broadcasting livestream video from the ROV Jason to the ship, to a satellite over 22,000 miles above the Earth.  From space, the video will then be transmitted to the UW, where it will be publicly available on the UW InteractiveOceans website. A daily blog will provide updates on the expeditions progress. Throughout the month, viewers will witness life thriving at depths 2900 m (>9500 ft) beneath the ocean surface and at Axial Seamount, the most active submarine volcano off the coast of Oregon and Washington. 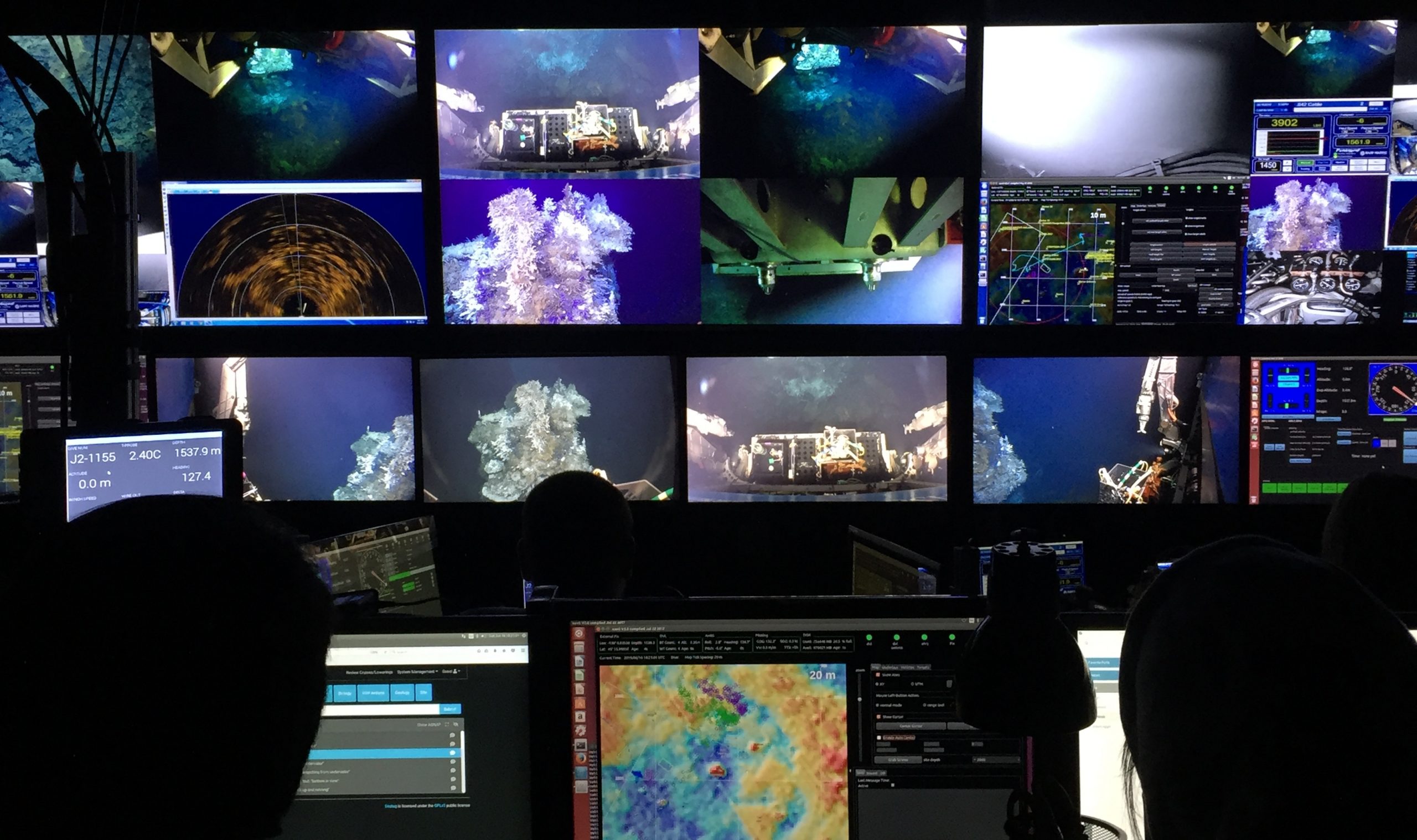 An example of some of the stunning imagery that will be live-streamed during the RCA expedition. Credit: Ramya Ravichandran Asha, UW, V19.

The RCA consists of 900 kilometers of cable that provide high-power, bandwidth, and two-way communication to 150 scientific instruments on the seafloor and to state-of-the art instrumented moorings that relay a constant stream of real-time ocean data to shore, 24 hours 365 days a year. All data are freely available to the community.

Being in corrosive saltwater for a 12-month stint is a hostile environment for equipment, so every summer a team of UW scientists and engineers head out to the array to recover equipment and deploy replacement ocean observing instrumentation These recovery and redeployment missions ensure that data continuously flow to shore from this Internet-connected array. At the RCA, cabled instruments are located across the Cascadia Margin, the Southern Hydrate Ridge, and at Axial seamount, each making an important contribution to better understanding the subseafloor environment. Cascadia Margin is one of the most biologically productive areas in the global ocean. Explosions of methane-rich bubbles issuing from beneath the seafloor rise > 1000 feet into the overlying water column at Southern Hydrate Ridge. Axial seamount has erupted in 1998, 2011, and 2015 and hosts some of the most extreme environments on Earth—underwater hot springs venting fluids at >700°C.

Dr. Orest Kawka, an RCA Senior Research Scientist, and Brendan Philip from the UW will sail as Chief Scientists – directing the cruise during the four weeks at sea.  As an undergraduate, Philip sailed on numerous RCA cruises as part of the UW educational VISIONS at sea experiential learning program, which has taken over 160 undergraduate students to sea, and later as a member of the RCA team.  He is now pursuing a master’s degree in Technology, Science, and Policy at George Washington University in Washington, DC.

Because of the large amount of gear (over 80,000 pounds of equipment) to load onto the fantail of the Thompson for deployment, the cruise will consist of two legs. 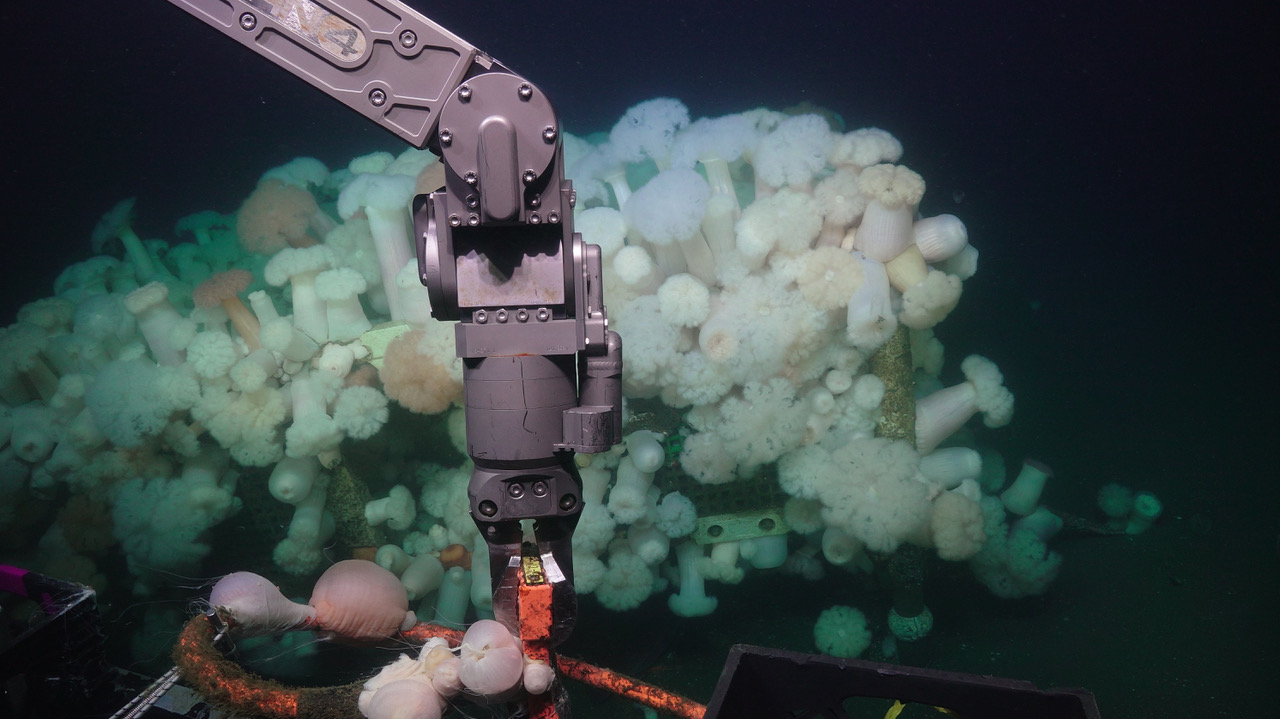 The manipulator arm of the ROV Jason operates in front of an anemone-covered junction box in the highly productive waters at the Oregon Shelf site. Credit: UW/OOI-NSF/WHOI, V19.

During more than 30 Jason missions to the deep, viewers will witness parts of the ocean rarely seen by humans. The team hopes to revisit some of the scientific highlights of last year’s expedition.  One such highlight was Jason being investigated by a swarm of large sable fish. At another site at 80 meters, a junction box became an island completely encrusted in beautiful sea anemones. At Southern Hydrate Ridge, the team saw rarely seen exposed methane hydrate and a moonscape topography dramatically changed from the year before, marked by new explosion pits and collapsed areas. And, on many past expeditions, team members have seen a novel prehistoric-looking fish, which was first filmed in the ocean on the 2014 RCA cruise at the Slope Base site at a depth of 9500 ft.  The RCA team fondly refers to this creature as “the weird fish,” (Genioliparis ferox), which also has been documented off Antarctica.

“We’ve got a fantastic team sailing this year, who have been putting in an incredible amount of work for months to get us ready. But like all cruises sailing this year, we’re dealing with the necessary challenge of having a smaller science party and still making sure we can safely accomplish the science and recovery and deployments. We will be in constant communication with the rest of the team back on shore, who will contribute as much to getting our work done as will the science party on the ship. The RCA team is grateful for the opportunity to sail during what has turned out to be a challenging year for ocean science and we’re looking forward to helping other oceanographers continue their research, even if they’re unable to sail this year,” said Chief Scientist Brendan Philip. 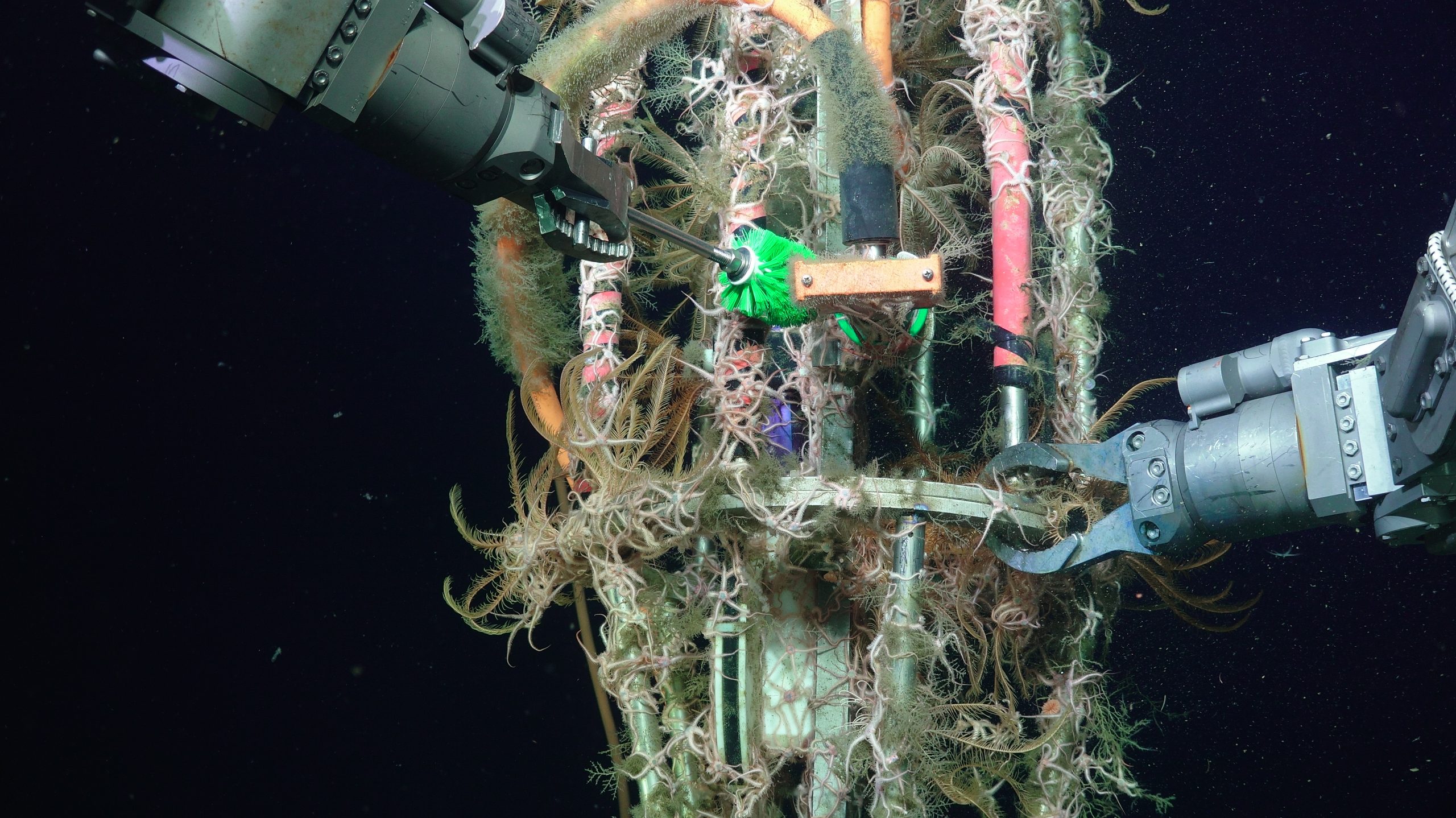 Manipulators on the ROV Jason work on a small frame located ~ 200 m beneath the oceans’s surface, which is encrusted in beautiful feathery creatures called crinoids. Credit: UW/NSF-OOI/WHOI

The daily schedule aboard the R/V Thompson promises to be intense, exacerbated by a smaller than normal scientific party due to COVID-19 precautions.  “Science teams, when using Jason, tend to keep the vehicle down for a long time, but because the tempo of this cruise is more like an industry cruise, the team will be diving and recovering the vehicle as rapidly as safely possible, sometimes with only a couple hours on deck between dives. It can be exhausting work, particularly for a team that will be onboard for a month,” explained Deb Kelley, RCA Director and principal investigator.  “But, being out at sea, seeing the sites and miles of ocean reaching the horizon, and working on this state-of-the-art marine facility makes it all worthwhile.” This year, for the first time, Kelley will be intently observing operations from onshore through the live video stream.

A reality in the new COVID-19 world is that the team can only mobilize gear onboard the ship after completing a strict quarantine period. Two weeks prior to boarding, members of the scientific party have lived in their homes (with all family members in quarantine for the duration), hotels or Airbnbs. Team members were tested for COVID prior to entering quarantine and conducted twice day temperature checks during their quarantine. Testing occurred again before being allowed to board the Thompson.

This expedition is novel in another way as a result of COVID precautions.  Only two students will be onboard.  Prior cruises have had 8-10 VISIONS students on each leg to help out and experience firsthand what it’s like to go to sea.  “We are hoping that many students and others tune in to experience this amazing environment that Jason will be revealing over the next month. It’s really an opportunity to visit some of the most extreme environments on Earth and see incredible life forms that has adapted to these harsh environments, which may be particularly uplifting to our spirits now that many folks are stuck at home,” said Kelley.

Livestreaming video will be available here and at InteractiveOceans.