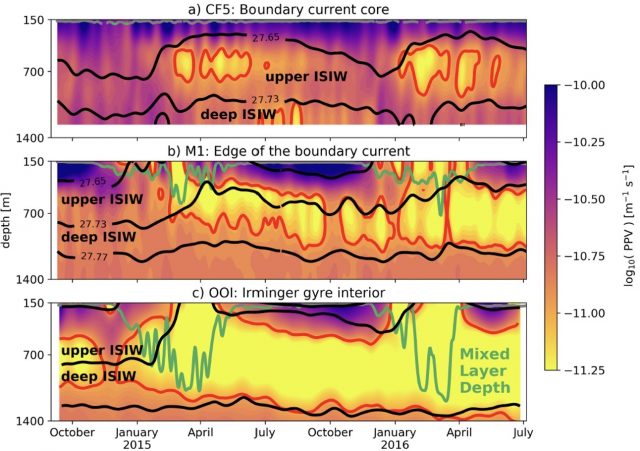 A two-year record from moorings in the Irminger Sea allowed researchers (Le Bras et al., 2020) to investigate both deep convection and transport of water masses associated with the Atlantic overturning circulation.  Using mooring data from the OOI Irminger Sea Array and the Overturning in the Subpolar North Atlantic (OSNAP) array, the authors were able to identify two types of Irminger Sea Intermediate Water (ISIW) formed by deep convection.  Upper ISIW is found near the edge of the Irminger Sea western boundary current, whereas Deep ISIW is formed in the basin interior.  Water masses were diagnosed using temperature-salinity properties and the planetary potential vorticity (PPV). Figure 19 shows PPV for three different locations, in the boundary current, at its edge, and in the Irminger Sea gyre.  Black lines in the figure indicate the isopycnals that bound upper and deep ISIW as defined by the authors, the red contours enclose water with low PPV (indicative of convection) and the green lines indicate the mixed layer depth.

Seasonal pulses of low PPV water in the boundary current occurring below the mixed layer (Figure 19a) suggest subduction from a non-local source offshore.  In contrast, low PPV water in the gyre interior is accompanied by a deep winter mixed layer and appears related to local convection.  Further analysis by the authors indicates that waters formed by convection in the interior gyre are entrained into the boundary current within a few months of formation.  Importantly, it appears that eddy dynamics are responsible for this transport of ventilated water from the interior to the boundary, and that the upper ISIW in the boundary current is a significant component of the Atlantic overturning circulation.