Ten scientists from Woods Hole Oceanographic Institution (WHOI) will board the R/V Neil Armstrong on 8 August 2020 for about a month-long expedition to OOI’s Irminger Sea Array. The journey includes an eight-day transit to reach the array, where they will recover and replace ocean observing equipment that has ridden out arduous conditions in a region known for intense winter wind events (peak speeds of 50-55 knots). 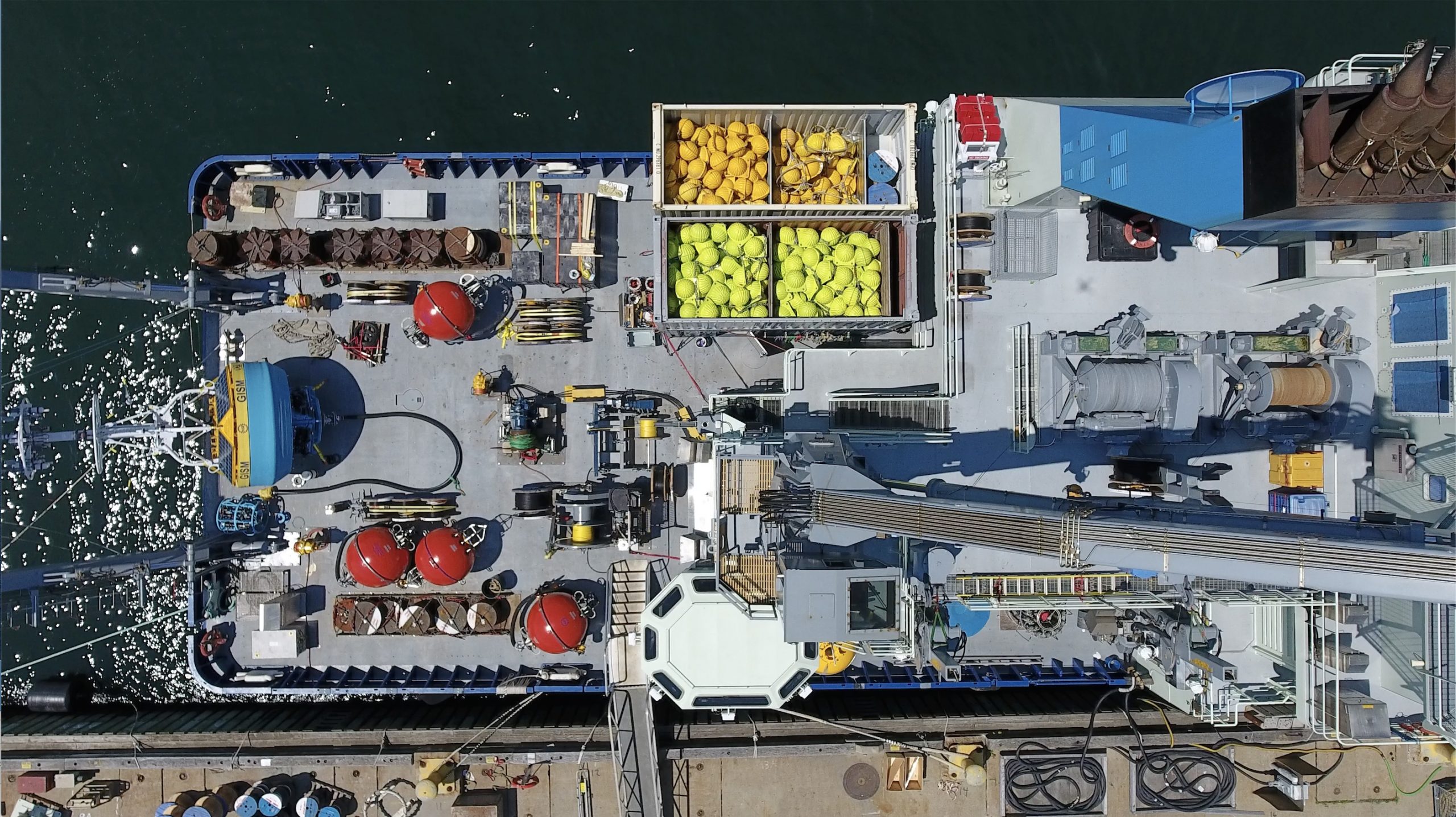 Iceland is separated from the east coast of Greenland by the Denmark Strait, roughly a distance of some 250 miles. The Irminger Sea is south of the strait, stretching from Iceland down to the latitude of Cape Farewell at Greenland’s southern tip. This region is important to the Atlantic Ocean circulation and sensitive to global climate change.

Supported by wind power and solar cells, the Irminger Sea Array consists of moorings that serve as home for sensors that measure air-sea fluxes of heat, moisture and momentum, and physical, biological and chemical properties throughout the water column. The observations of the moorings are enhanced by open-ocean gliders that sample within and around the triangular array. The subsurface mooring data is also collected by the gliders via acoustic modem. The gliders then relay the collected data, glider sampling and mooring data, to shore via satellite telemetry each time they surface. Gliders also sample the upper water column near the Apex Profiler Mooring to complement the moored profiler data and extend coverage to the air-sea interface.

This month-long expedition is the seventh time the OOI team has traveled to the array, specifically to replace and repair equipment that is vital to maintaining a continuous flow of data from this important site.

“This is a difficult region to sustain surface observations, yet such observations are critical to improving our understanding of air-sea exchanges and deep convection that drives the Atlantic overturning circulation” said Al Plueddemann, project scientist for the OOI Coastal and Global Scale Nodes (CGSN).

WHOI Research Scientist Sebastien Bigorre will serve as the chief scientist for the expedition.

The scientific party went into a 14-day quarantine on 21 July to ensure that everyone could safely board the ship.  They were tested for COVID-19 prior to quarantine and will be tested again prior to departure.  Masks and social distancing will be practiced onboard until another two-week period of health is achieved. At that point, mask wearing may be loosened as the scientific team and crew members will, in effect, be their own social bubble as they live, work, and share the space of the 238 foot-long vessel. 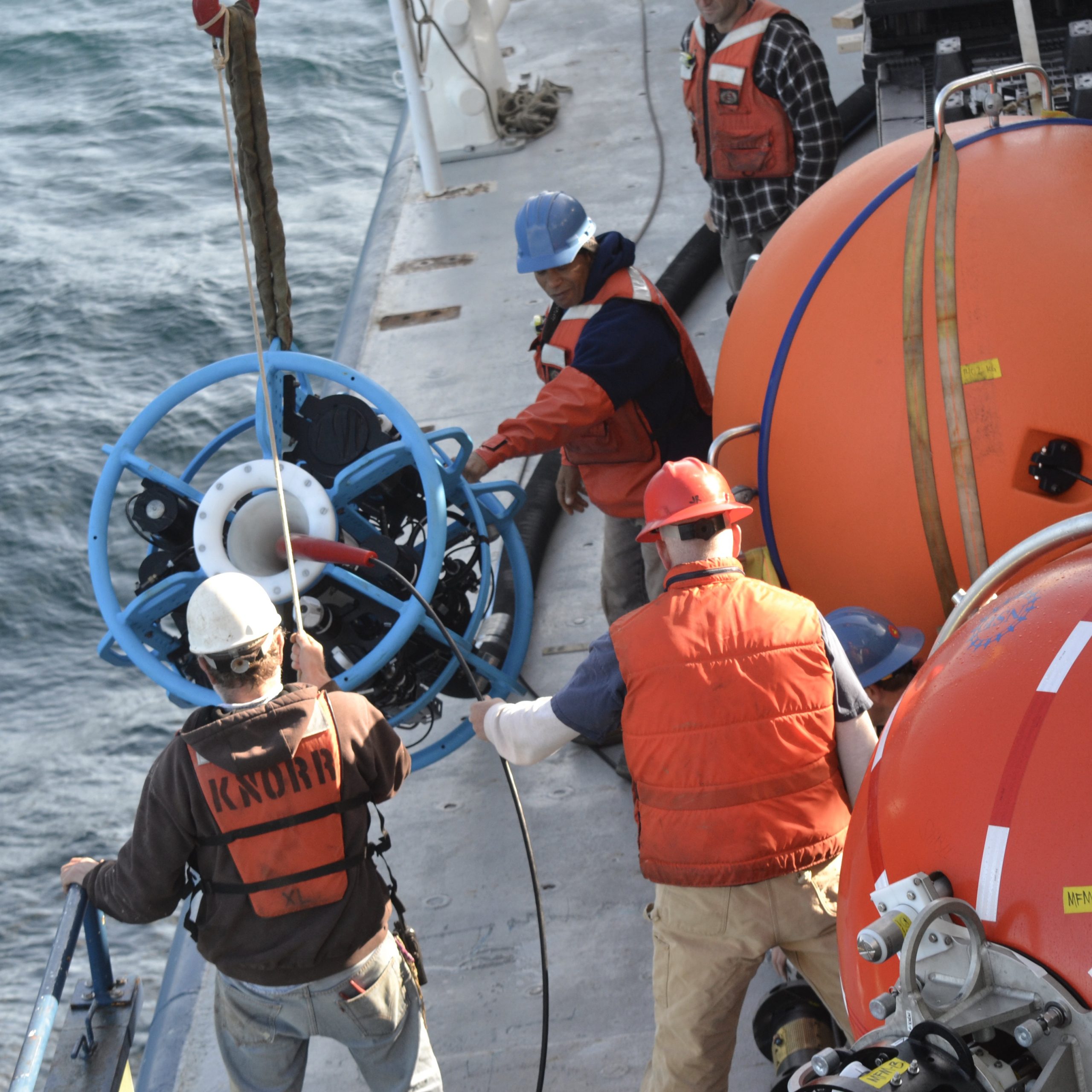 During a past expedition to the Irminger Sea Array, the crew deploys a near surface instrument frame to the array. Credit: Alison Heater © Woods Hole Oceanographic Institution

Explained Derek Buffitt, program manager for the Coastal and Global Scale Nodes, operated from Woods Hole Oceanographic Institution, which includes oversight of the Irminger Sea Array, “COVID-19 created plenty of new logistical challenges for an expedition of this length and distance.  We had to address contingencies such as what to do if someone presented COVID symptoms while at sea. WHOI’s marine operations office, working with agents and government representatives, confirmed health and safety protocols within the foreign ports along the planned vessel track.  This was to ensure our personnel could receive the care needed in an emergency and in a timely manner.”

Such contingencies were necessary steps, in addition to many months of preparation, to ensure the equipment to be deployed is ready, tested, and packaged for transporting to the ship.

Watch this space, and social media, as we follow along on this important expedition.