Home :: Science ::Science Highlights ::Axial Seamount: One of the Longest Records for Tsunami Research in the Ocean 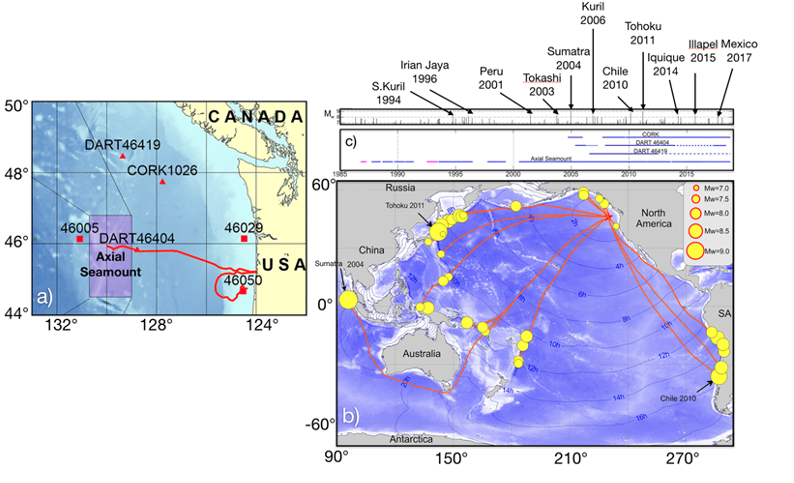 Figure 22. a) Location of bottom pressure recorders (BPRS) at Axial Seamount and vicinity (Cleft segment not shown in this illustration), including DART buoys and an IODP Corked site (after [1]). Most of the pressure data for this investigation were from Axial Seamount. b) Source regionals for the tsunamis recorded at Axial with yellow circles indicating earthquake locations and circle size proportional to magnitudes. The thin blue lines mark the leading edge of tsunamis at 2 hr intervals after an earthquake. c) Temporal coverage of the BPR records and recorded tsunamis at Axial and adjacent areas 1986-2018. Magenta lines are BPR recordings from the Cleft Segment, south of Axial on the Juan de Fuca Ridge.

This study by Fine et al., [1] examines a 32 year record of high resolution bottom pressure recorder (BPR) measurements made by cabled instruments installed on Axial Seamount in 2014, and uncabled instruments at Axial, the Cleft Segment of the Juan de Fuca Ridge, DART buoys, and an IODP cored observatory (Hole 1026): most of the measurements in this study are from Axial (Figure 22).  A total of 41 tsunamis were documented from 1986-2018 with all events associated with tsunamigenic earthquakes with magnitudes of 7.0 or greater.  In contrast to coastal tide gauge observations, open ocean measurements by BPRs are advantageous because of the high signal-to-noise ratio.  Based on this study, it is possible to forecast the effect of a tsunami originating from a source near a historical source, not only for Axial, but also for locations along the British Columbia‐Washington‐Oregon coast.  These results allow a size-frequency model world-wide.  The RCA cabled bottom pressure-tilt instruments, with 20 Hz sampling rates and with resolutions of 2 mm of seawater depth, provide especially high-resolution measurements. [1] Fine, I.V., Thomson, R.E., Chadwick, W.W., Jr., and Fox, C.G., (2020) Toward a universal frequency occurrence distribution for tsunamis: statistical analyses of a 32-year bottom pressure record at Axial Seamount.  Geophysical Research Letter, https://doi.org/10.1029/2020GL087372.