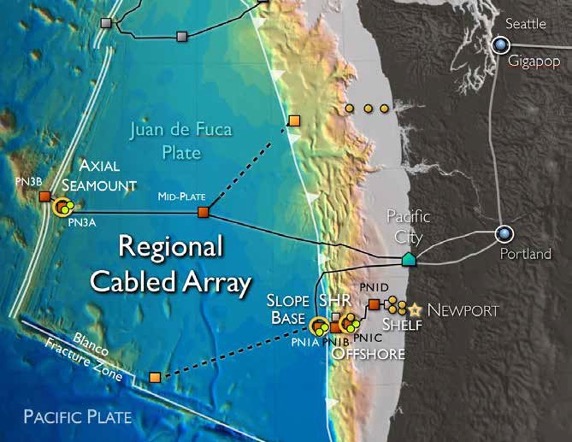 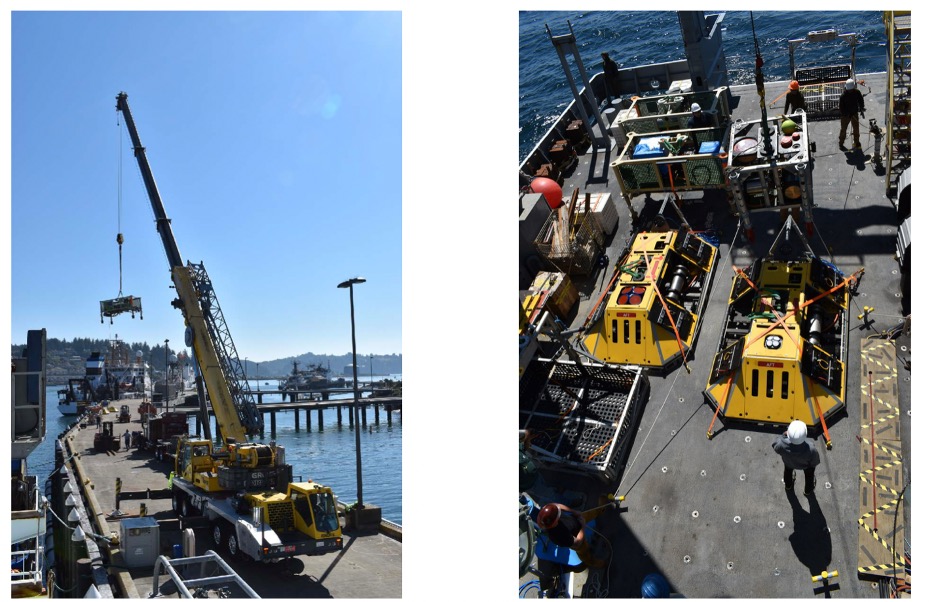 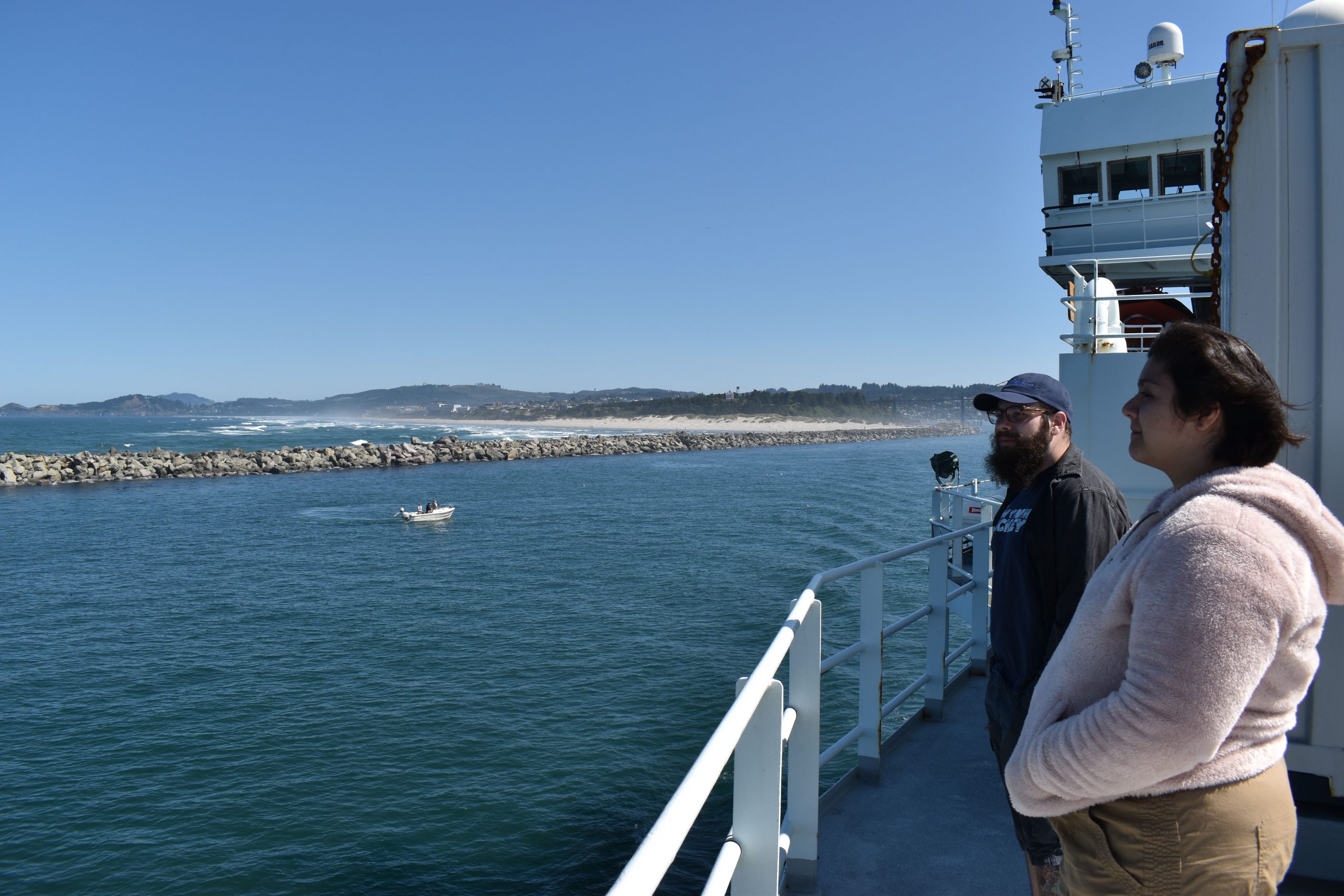 K. Gonzalez, UW Oceanography undergraduate, and S. Karaduzovic, Queens College undergraduate, gaze out into the NE Pacific as the R/V Thomas G. Thompson sails through the Yaquina Bay channel on its way to begin Leg 2 of the RCA expedition. Credit. M. Elend, University of Washington. V20. 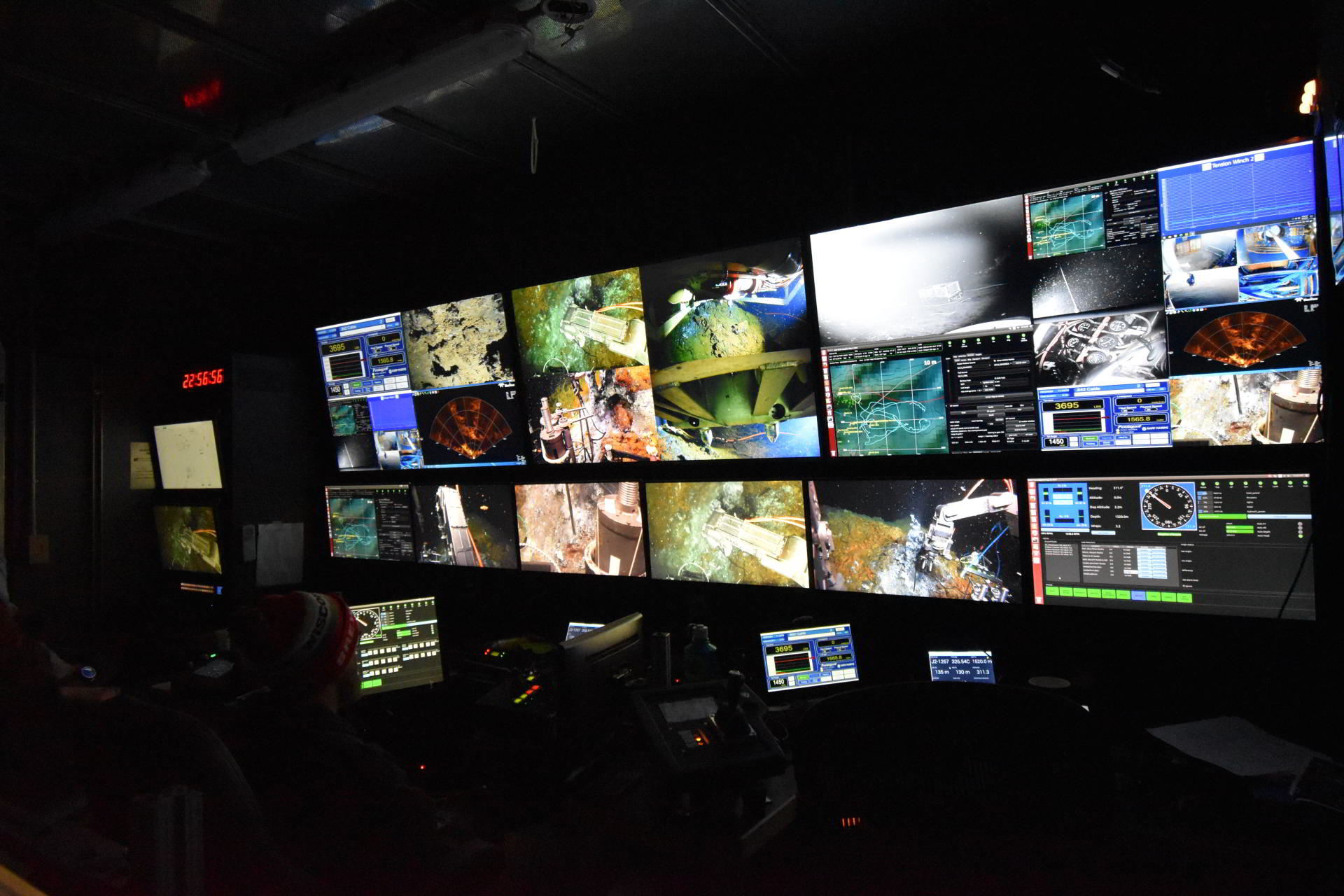 Video, sonar, and navigation panels inside the ROV Jason control van as the team works nearly a mile beneath the oceans’ surface at the International District Hydrothermal Field atop Axial Seamount. Credit: University of Washington. V20. 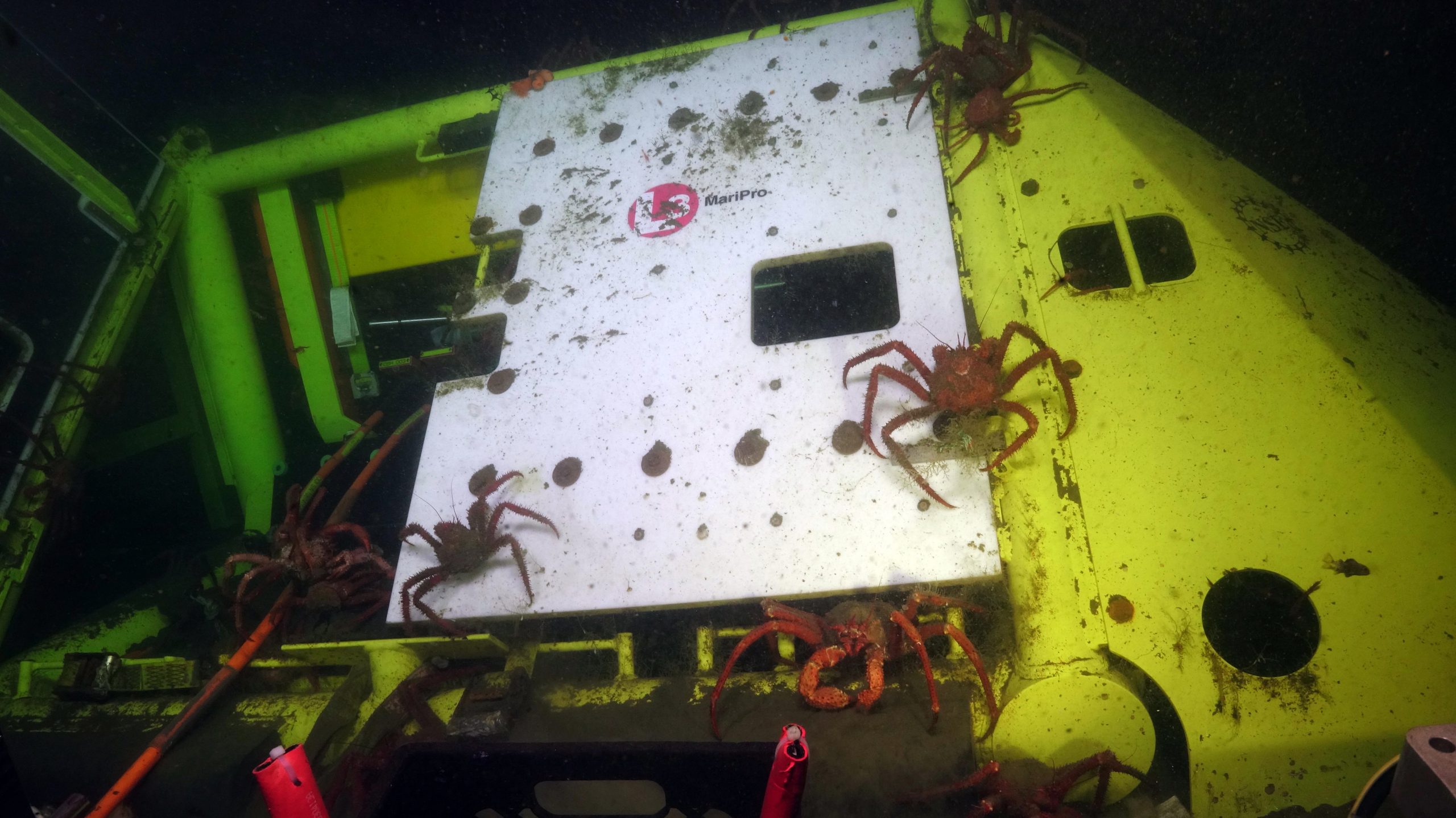 The ROVJason inspects Primary Node PN1B. These 12,000 lb nodes and primary backbone cable were built and installed in 2014 through an award to L3MariPro. This large seafloor substation converts 10,000 volts to 374 volts, and 10 Gb/s bandwidth to be distributed to cabled platforms and instruments. Here, extension cables plugged inside the node with wet-mate connectors provide power and bandwidth to Southern Hydrate Ridge, and upstream to the Oregon Offshore and Shelf sites. Credit: UW/NSF-OOI/WHOI. V20. 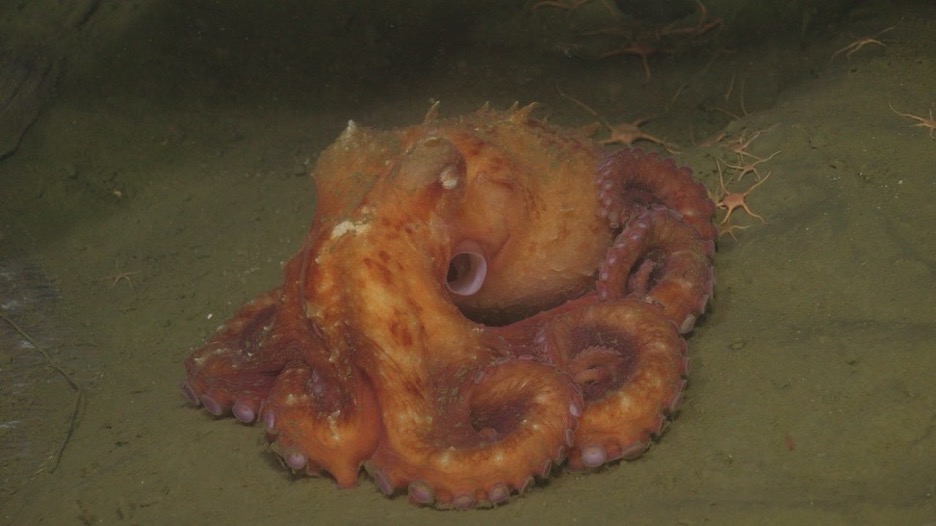 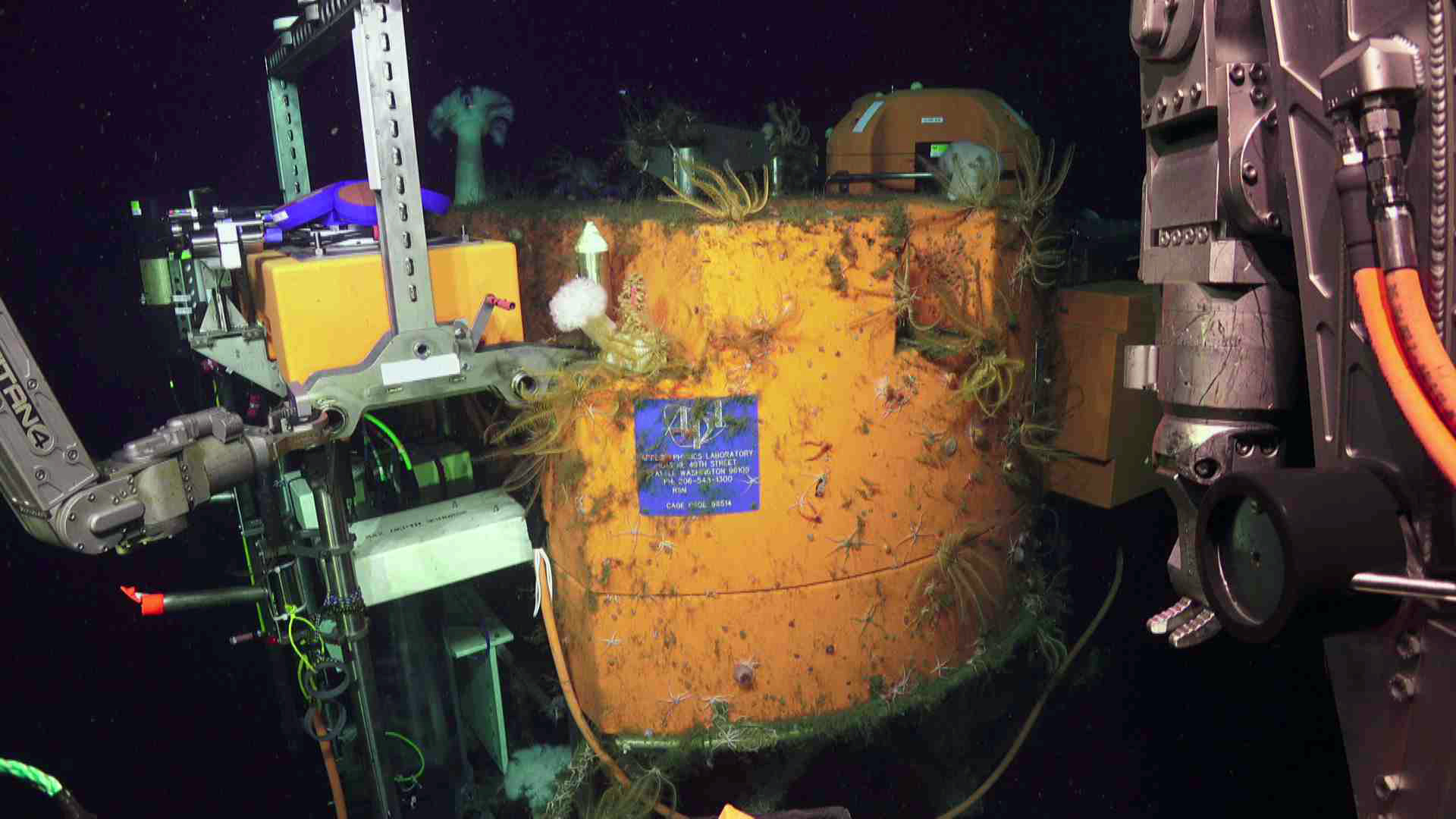 The ROV Jason installs a refurbished instrumented platform onto the Shallow Profiler Mooring at the cabled Oregon Offshore site. The platform hosts a zooplankton sonar, and instruments that measure pH, dissolved CO2, salinity, temperature, and dissolved oxygen. The 12 ft-across large mooring platforms at 200 m depth stay in the water for several years and become islands inhabited by a wealth of sea life. Credit: UW/NSF-OOI/WHOI.V20. 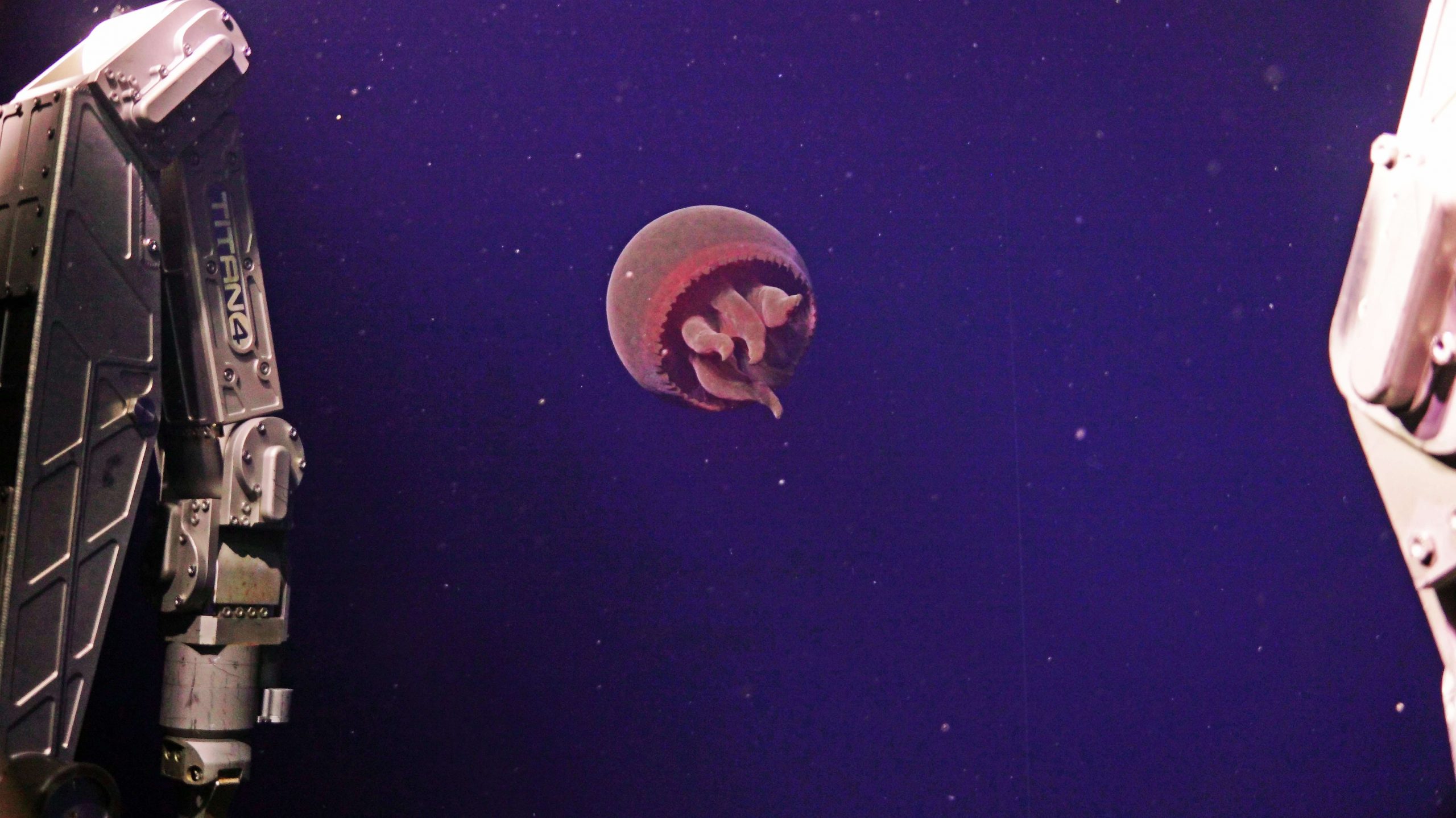 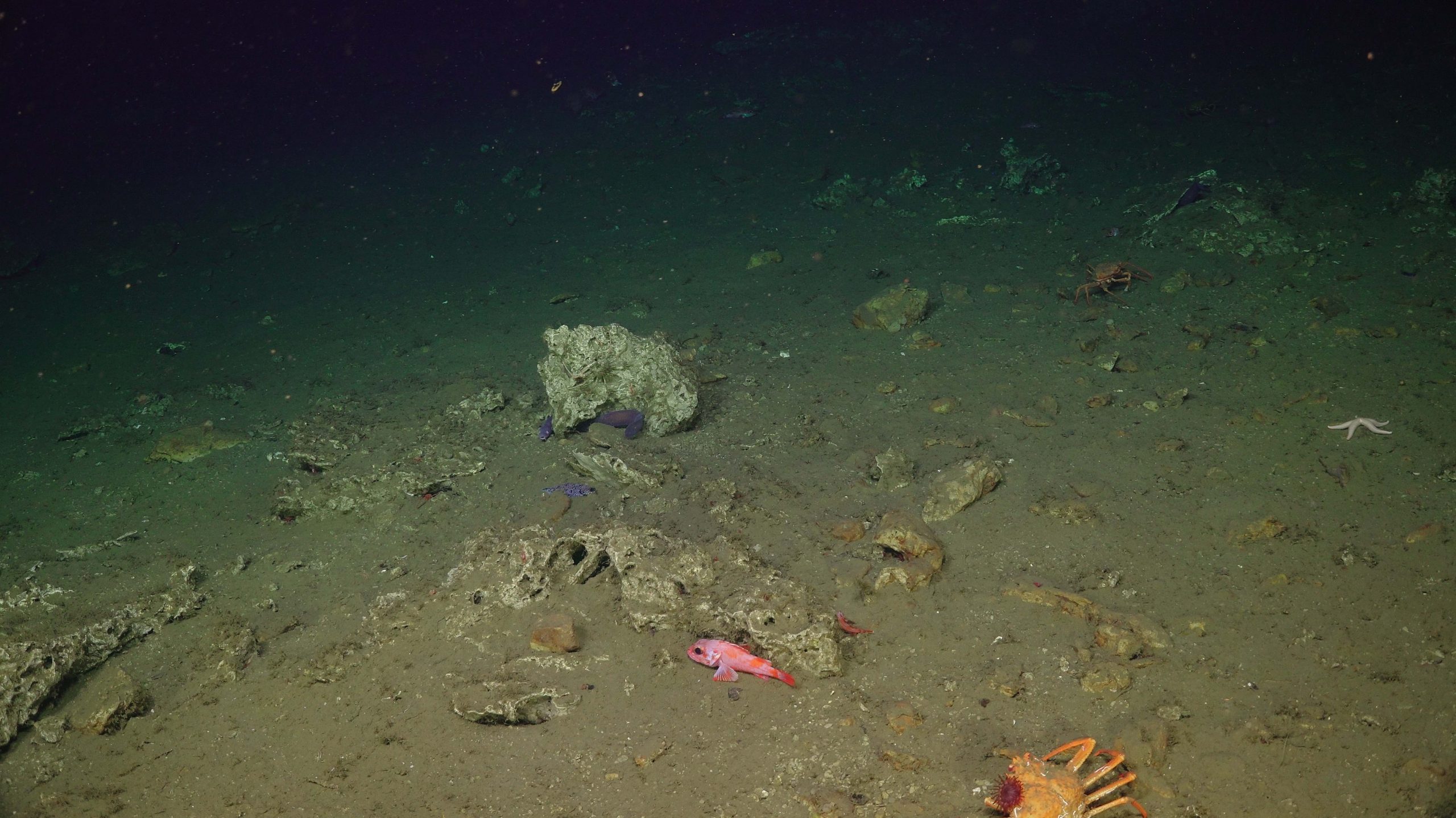 The Regional Cabled Array team always enjoys dives to the methane seep site at the Southern Hydrate Ridge. It is rich in animals — e.g. red striped rockfish, lavender hagfish, crabs, spotted sole — that thrive among the carbonate blocks and adjacent to the seeps where methane streams from the seafloor. Credit: UW/NSF-OOI/WHOI.V20. 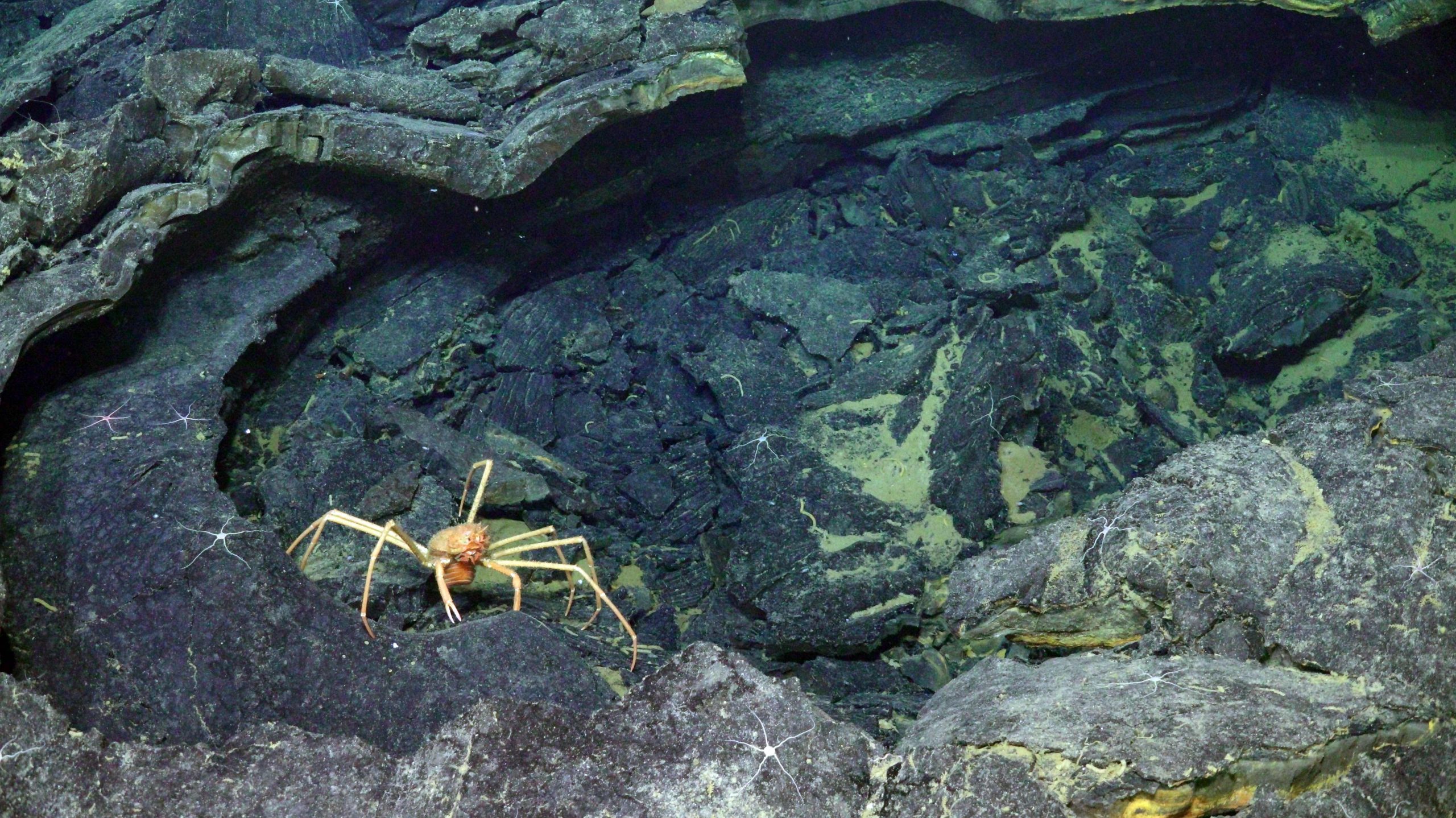 A spider crab explores a collapsed, frozen lava lake at the summit of Axial Seamount, an active underwater volcano 4970 ft beneath the oceans’ surface, which is poised to soon erupt. Credit: UW/NSF-OOI/WHOI.V20.