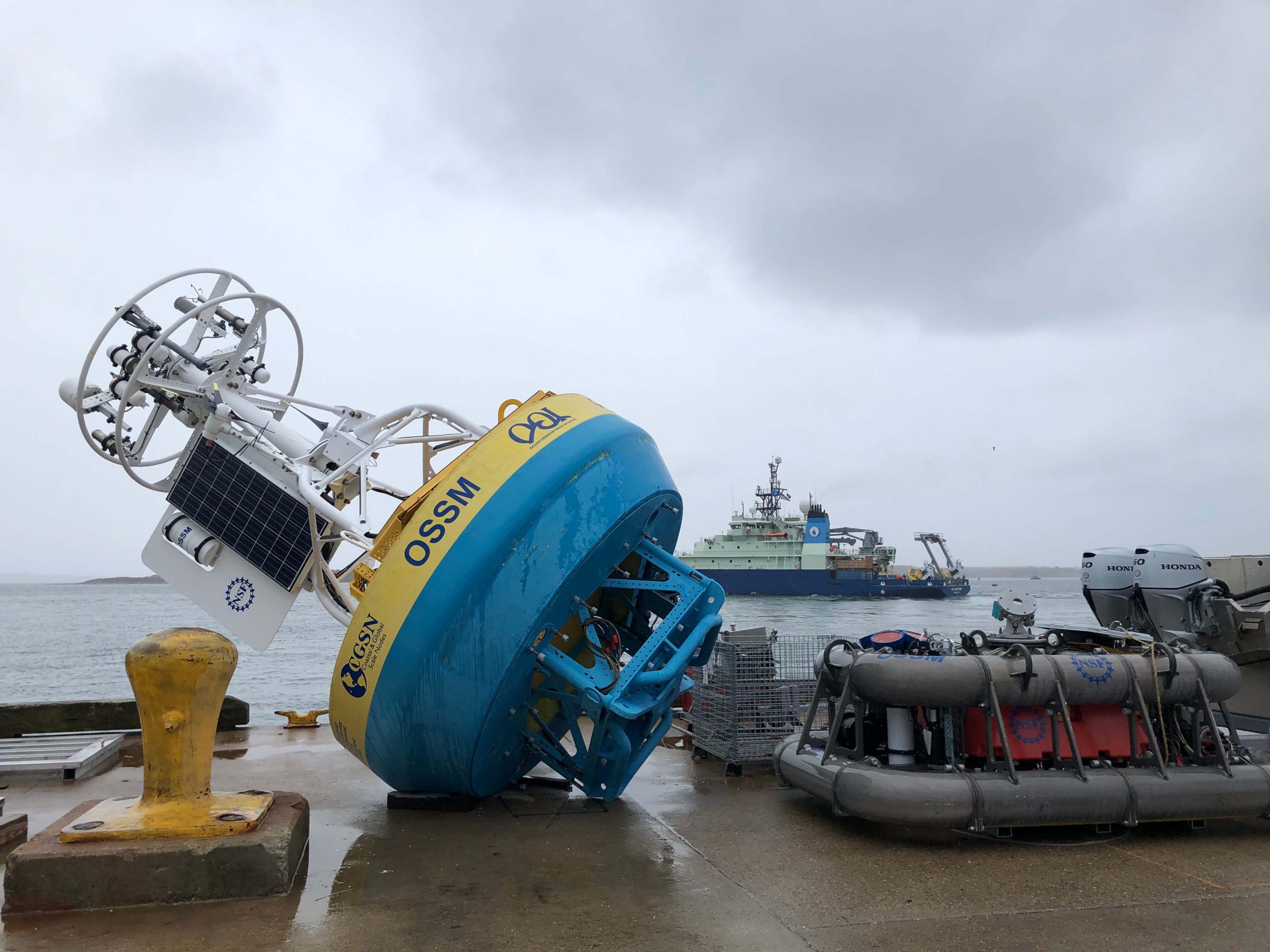 The Pioneer 15 Team departs aboard the R/V Neil Armstrong, framed by equipment that awaits deployment on leg two.

On October 28th, ten scientists and engineers from Woods Hole Oceanographic Institution departed aboard the R/V Neil Armstrong headed to the Pioneer Array, about 75 nautical miles south of Martha’s Vineyard in the Atlantic Ocean. This trip is the 15th time that a team has traveled to the Pioneer Array to recover and deploy equipment at the site.

The team will recover and deploy three coastal surface moorings and a profiler mooring, and deploy two winter coastal profiler moorings. They will also conduct CTD (Conductivity, temperature, and depth) casts and water sampling at the deployment and recovery sites.  In addition, the team will compare ship and buoy meteorological measurements at the surface mooring sites as a way to validate the mooring measurements.

“We’ve been isolating for 14 days, have successfully passed 2 COVID-19 tests, and are ready to go, “ said Sheri White, chief scientist for Pioneer 15.  “This is a two-leg expedition because we can’t fit all of the moorings on the deck for one trip to the array.  We plan to be in port on November 4th to swap out gear, but we can adjust our schedule accordingly. If bad weather picks up, we can head back to port early to collect the equipment for leg two and not lose valuable time at sea when we can’t work due to weather.” The ship is expected to return from leg two on 11 November.

The surface moorings being recovered have been deployed for one year – six months longer than intended, due to the COVID-19 pandemic – and so are starting to experience some wear and tear.  The new moorings being deployed incorporate design updates intended to improve the robustness of components such as the wind turbines and stretch hoses.  The team  also will be deploying a prototype quad transducer for the ZPLSC instrument.  The ZPLSC is a bio-acoustic sonar which measures acoustic signals of plankton and zooplankton at the OOI Coastal Arrays.  It has transducers that emit at frequencies of 38, 125, 200 and 400 kHz (the latter three are all from a single quad-transducer). The new quad transducer design should lead to less failures and improved data collection for that instrument.

In addition to performing OOI tasks, the team will be conducting ancillary work to support the Northeast Shelf Long Term Ecological Research (NES-LTER) program.  This will include CTD casts, and sampling from the ship’s underway seawater system with an Imaging FlowCytobot (IFCB) instrument.

The members of the scientific party include: