The weather for the 15-day Pioneer 15 expedition aboard the R/V Neil Armstrong came in like a lion and left like a lamb. As the ship departed the Woods Hole dock on 28 October, the sky was gray, the air damp, and the forecast foreboding as the 10- member scientific team and the crew of the R/V Neil Armstrong headed toward the Pioneer Array, about 75 nautical miles south of Martha’s Vineyard.

During Leg 1, the ship had some rocky days and briefly sought the protection of Menemsha Bight on the northwest side of Martha’s Vineyard as Tropical Storm Zeta passed through and brought her fury with her. Leg 2 of the journey brought with it clear skies and smooth sailing. The following shows the wind and pressure data from the ship throughout the Pioneer 15 cruise. 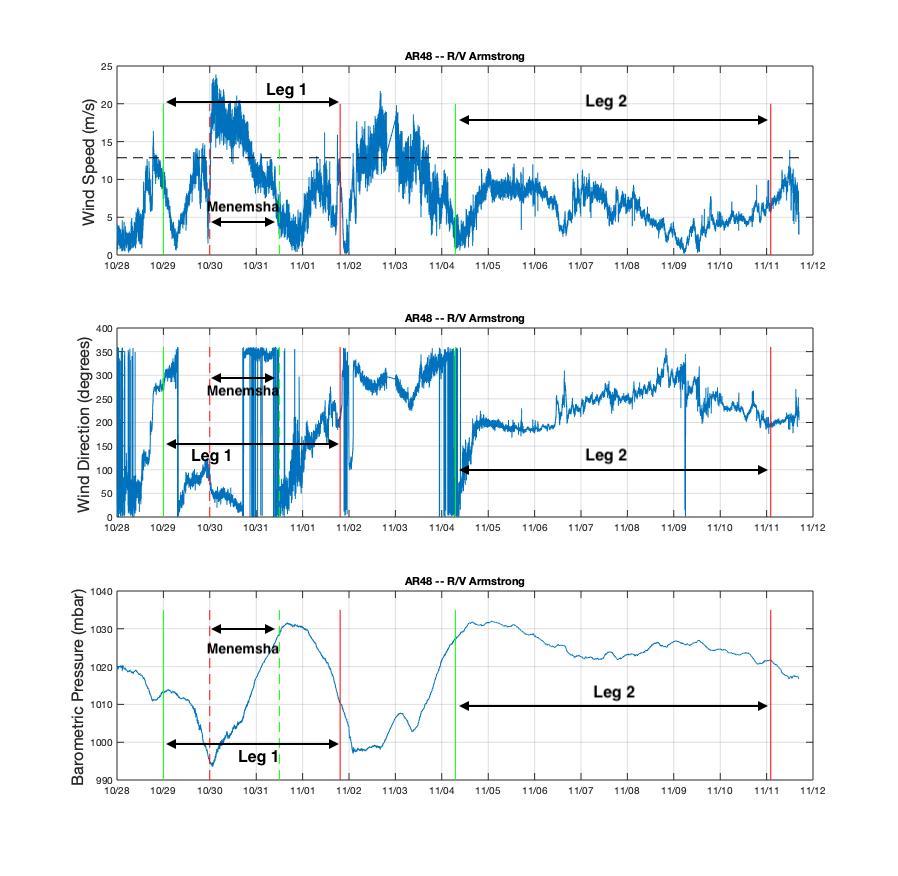 Wind speed, direction, and barometric pressure from the met mast of the R/V Neil Armstrong. The green lines indicate when the ship arrived at the Array, the red lines show when it departed. The solid lines are for Leg 1 and Leg 2, and the dashed lines are the excursion to Menemsha in Leg 1.  Credit: Sheri N. White (WHOI)

Chief Scientist Sheri N. White said, “Despite the difficult weather, we had a very successful mission. The team recovered and deployed three coastal surface moorings and a profiler mooring, and deployed two winter coastal profiler moorings. We also were able to recover three gliders, and collect shipboard and CTD data in the vicinity of the Array.  We planned on a bit of flexibility in the schedule due to the late fall departure, which always brings with it unpredictable conditions.”

The expedition was conducted in two legs because all of the moorings could not be accommodated on the ship at the same time. The Team returned to home port at the conclusion of the cruise on 11 November, when they disembarked after a month of being either in isolation or at sea away from friends and family. 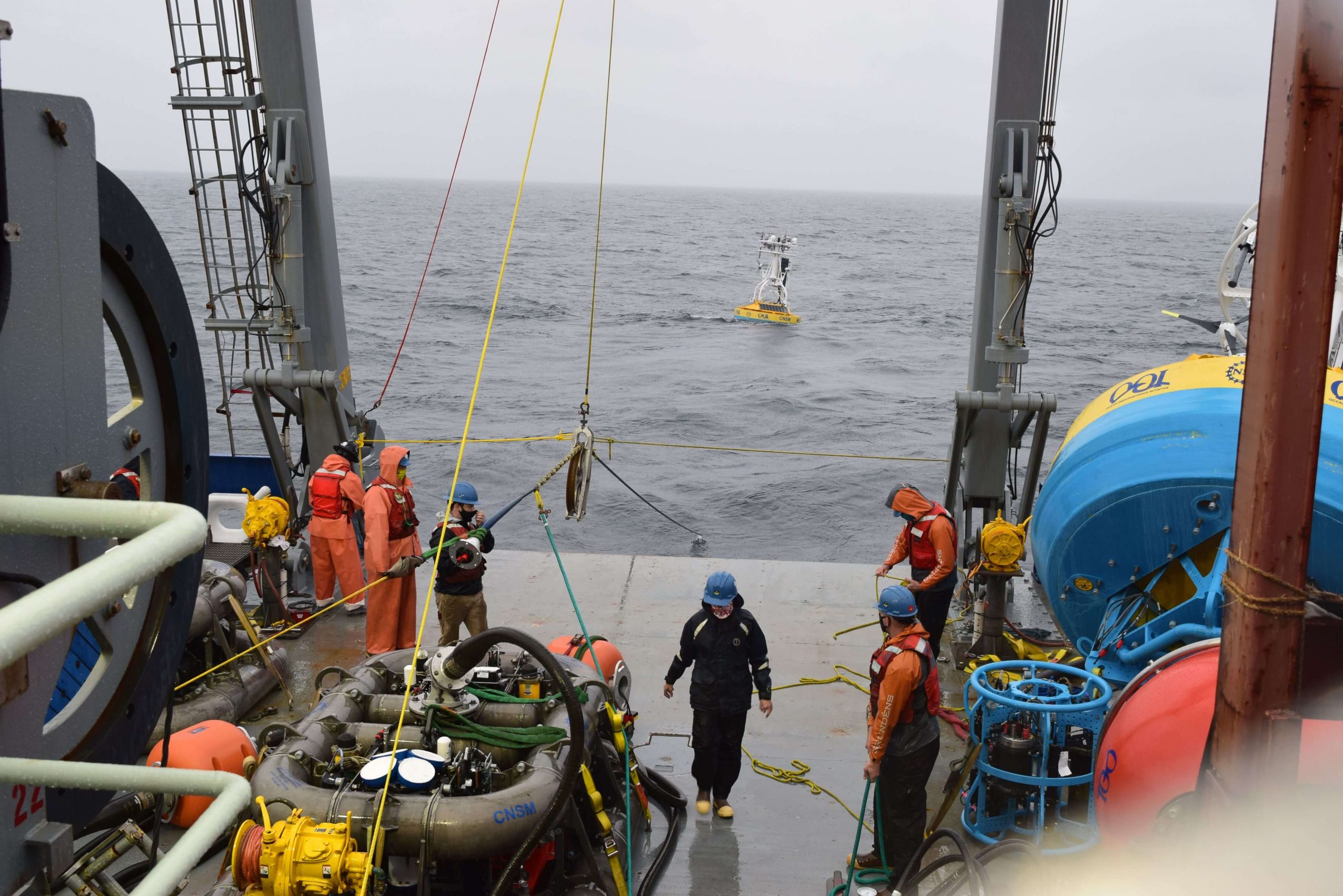 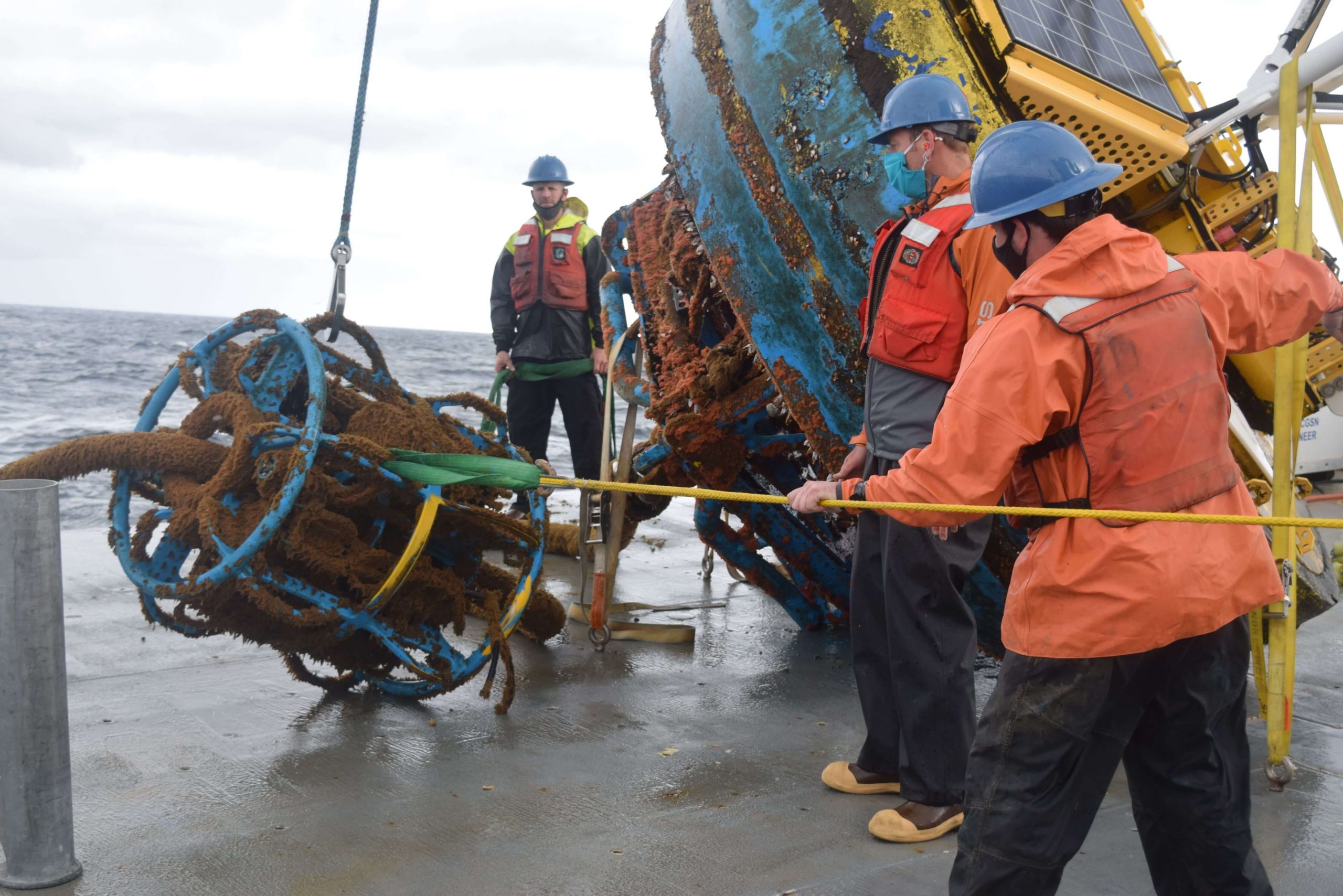 The Pioneer 15 Team recovers the Inshore Surface Mooring. It had been in deployed in the water for 12 months. Credit: Dee Emrich©WHOI 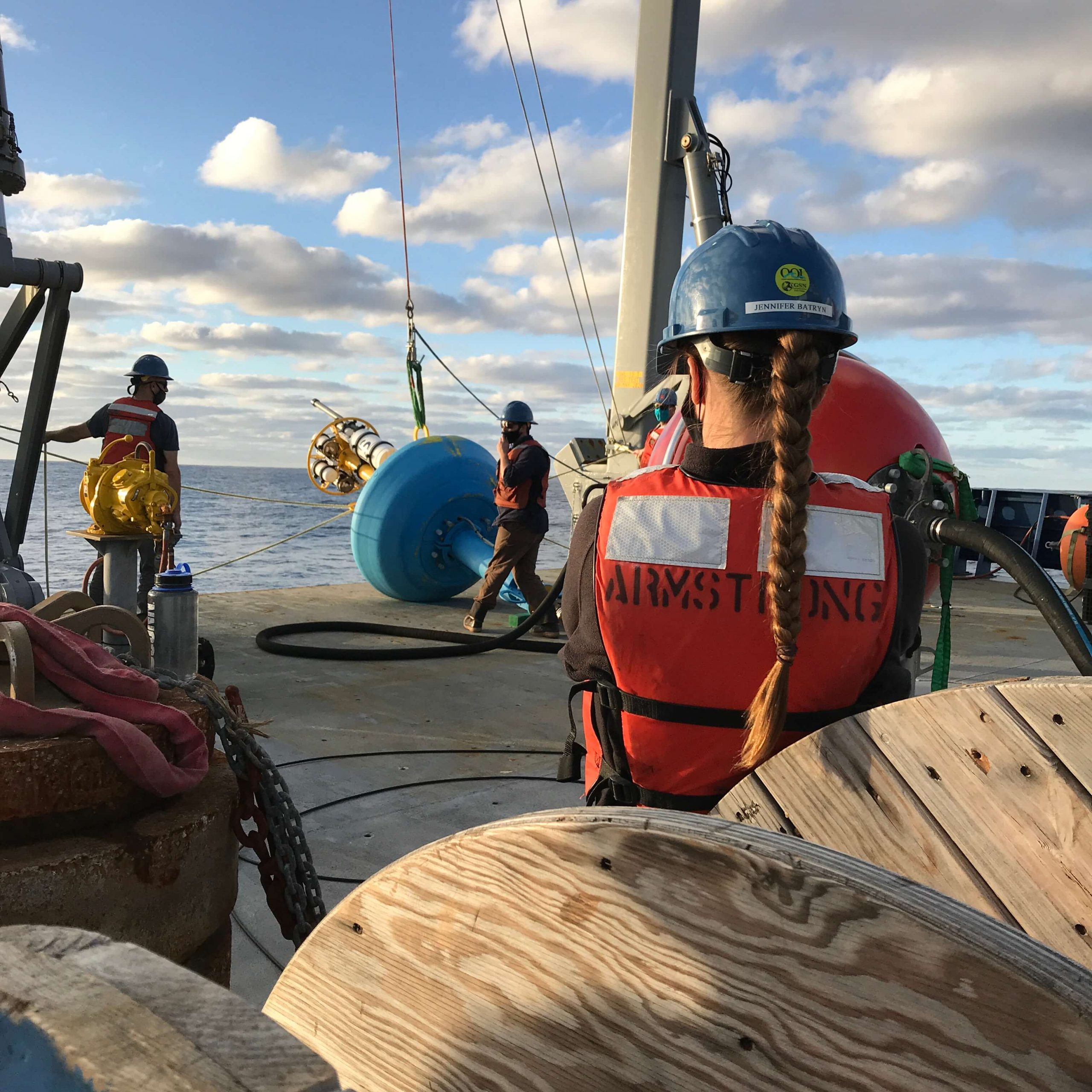 The Team dressed as oceanographers for Halloween… and deployed the Inshore Profiler Mooring in the few hours of clear skies between two storms at the Pioneer Array. Credit: Sheri N. White©WHOI 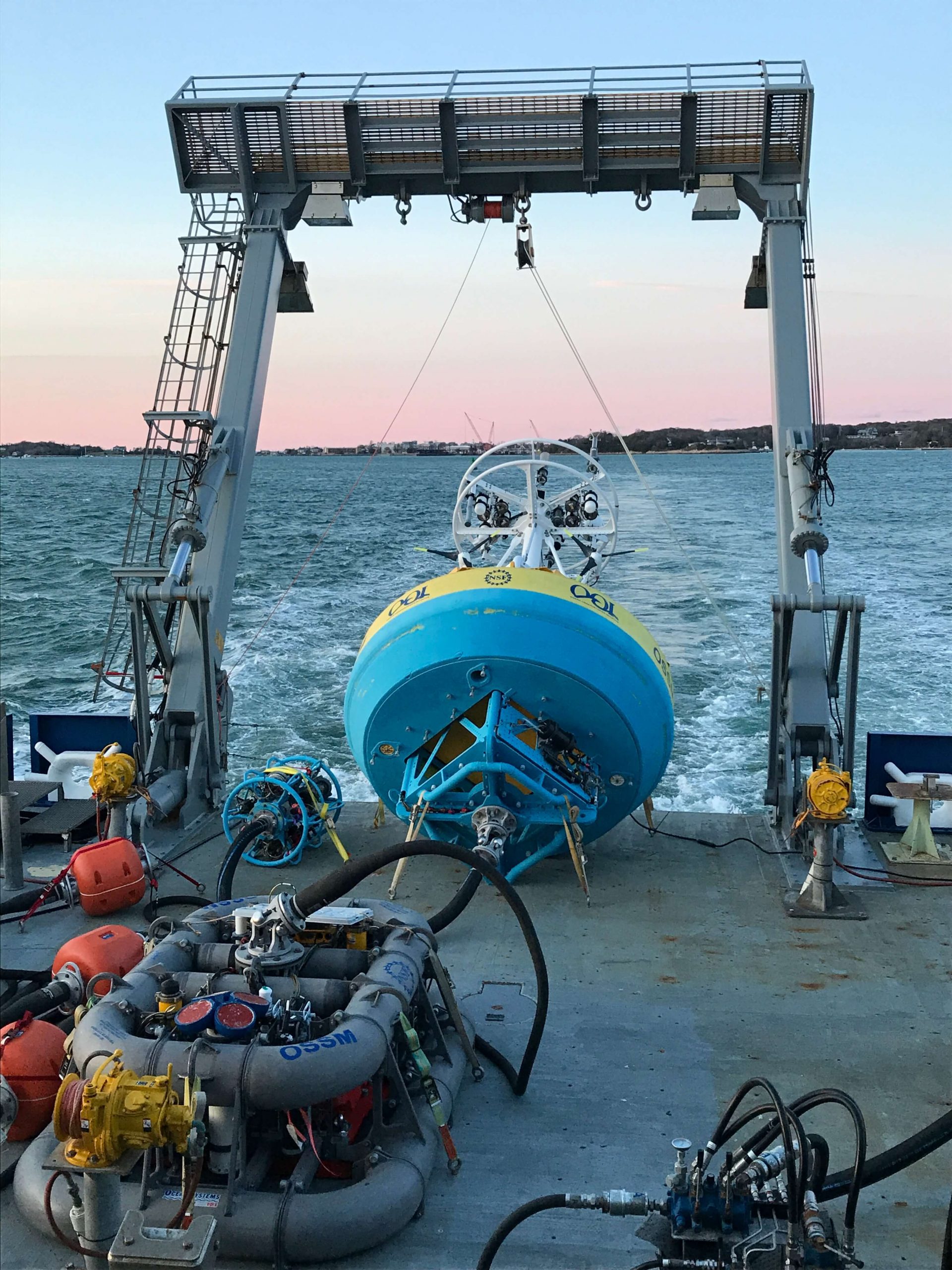 The R/V Neil Armstrong left the WHOI dock on Leg 2 of the Pioneer 15 expedition, with the Central Surface Mooring in position for deployment. Credit: Sheri N. White©WHOI 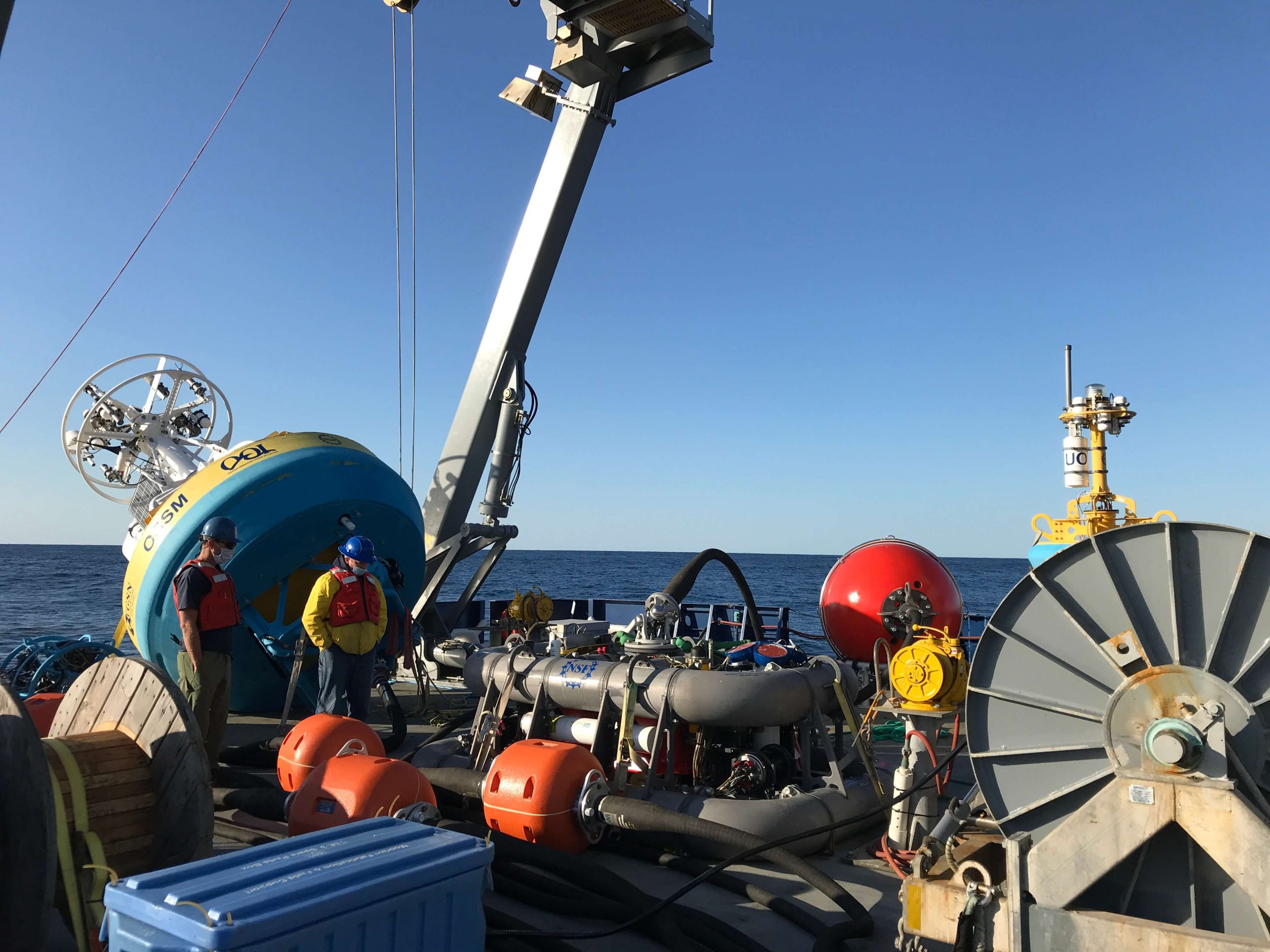 The Offshore Surface Mooring is ready for deployment on the stern of the R/V Neil Armstrong on Leg 2. Credit: Dee Emrich©WHOI 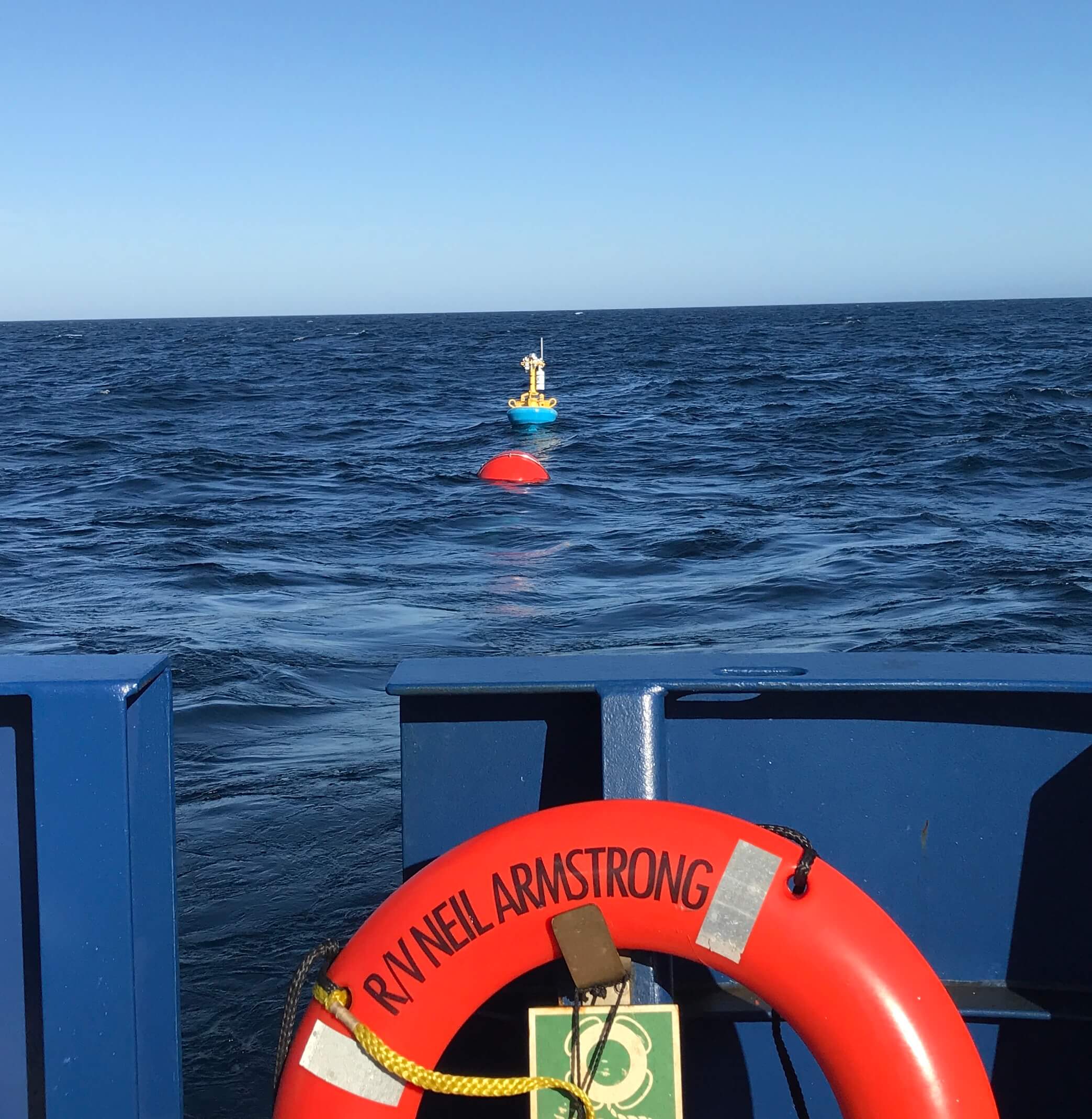 This is what a Profiler Mooring looks like during deployment. Profiler Moorings collect data from the entire water column using a McLane Moored Profiler, which crawls up and down the mooring line. Credit: Sheri N. White©WHOI 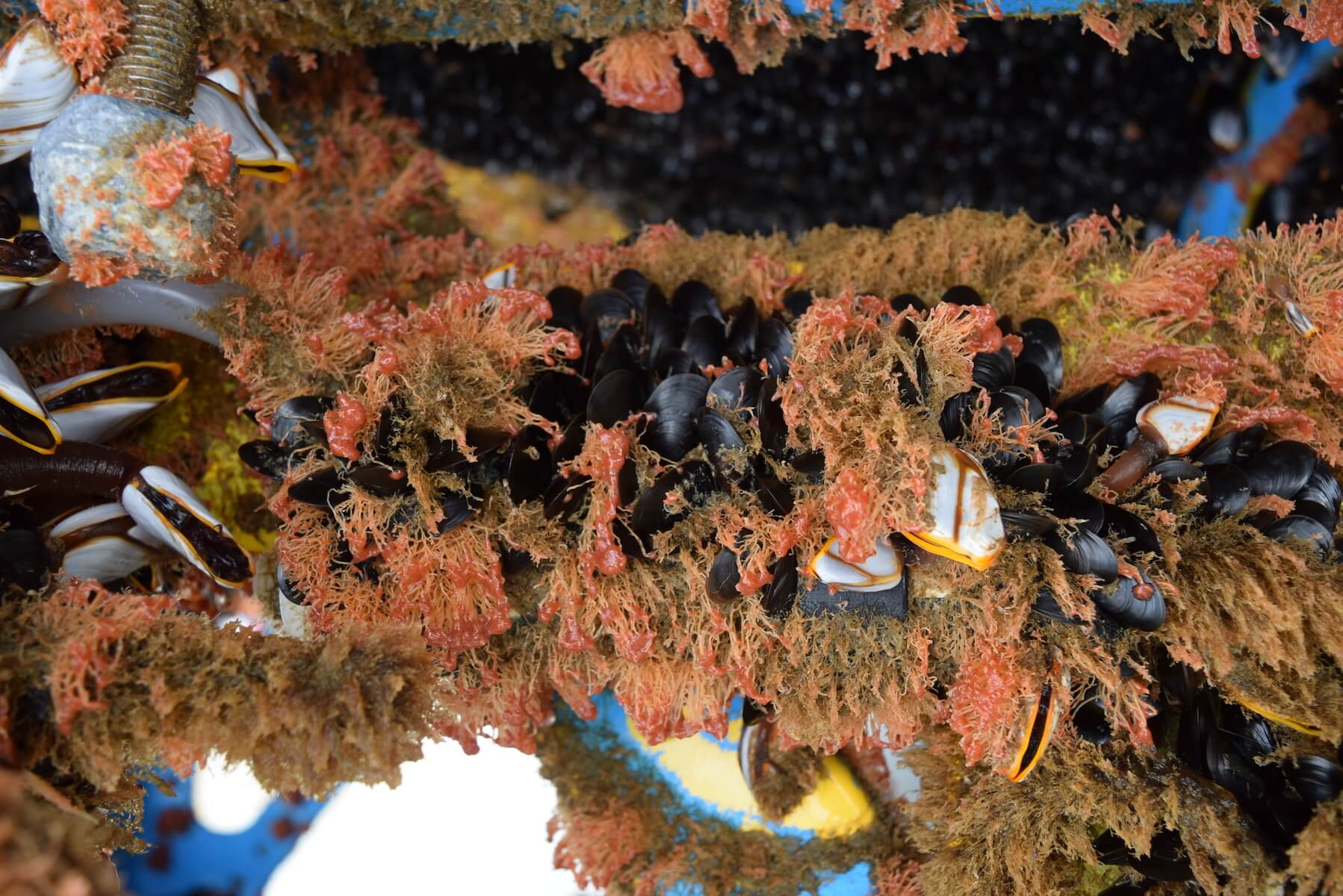 This is some of the biology that has taken up residence on the Inshore Surface Mooring during its year-long stay on the Atlantic continental shelf. Credit: Dee Emrich©WHOI