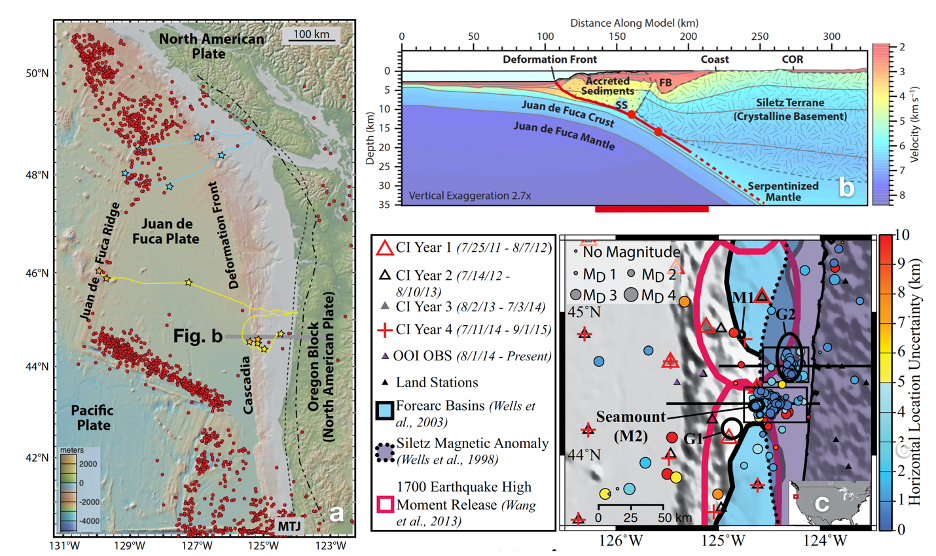 Figure 20. Earthquake generating processes in the central portion of the Cascadia Margin. a) Location of ≥4 magnitude earthquakes (red dots) 1989-August 2017 from the Advanced National Seismic System Comprehensive Earthquake catalog. The short dashed line is the 450°C contour, and short-long dashed line is the updip limit of tremor from 2005-2011 [after 1]. b) Interpreted cross section through the Cascadia Subduction Zone crossing the location of the Regional Cabled Array (RCA) margin sites. Red dots are projected positions of two 4.7-4.8 magnitude earthquakes in 2004 [1]. Basement rocks of the upper plate – the Siletz Terrane – comprise accreted anomalously thick mafic oceanic crust [1-3]. SS indicates the position of a subducted seamount west of the Siletz terrane [1]. c) Detected seismicity (blue dots – 222 earthquakes) approximately centered on the location of RCA ocean bottom seismometers on the Juan de Fuca Plate at Slope Base and on the margin at Southern Hydrate Ridge (purple triangles) [4]. Dot size is proportional to magnitude. A southern cluster centered at depths of ~ 5-10 km, is associated with the location of the subducted seamount, while the northern cluster may be associated with possibly accreted seamount [4].).

The Cascadia Subduction Zone extends from northern California to British Columbia. It has experienced magnitude 9 megathrust events with a reoccurrence rate of every ~500 years over the past 10,000 years [5] and large earthquakes at intervals of ~ 200-1200 years [6]. The last Cascadia megathrust rupture occurred on January 26, 1700 [5]. When the next event occurs, it is estimated that financial losses would be ~ $60 billion USD with substantial loss of life. Hence, there is significant research focused on understanding seismic processes along this ~ 1100 km subduction zone, the generation of slow earthquakes, and causes of variation in seismicity along strike.

Understanding the factors that control seismic events was/is a major driver in the siting of OOI-RCA core geophysical instrumentation on the southern line of the Regional Cabled Array: the RCA is one of the few places in the world where seismic-focused instrumentation occurs on both the down-going tectonic plate and on the overlying margin. The offshore network is especially valuable in determining earthquake source depths that inform on interpolate dynamics [1]. The central section of the Cascadia Margin is the only area that experiences repeat, measurable shallow crustal earthquakes [1-3]. RCA data flowing from the seismic network at Slope Base and Southern Hydrate Ridge, and from the Cascadia Initiative are providing new insights into factors controlling seismicity along this portion of the margin [1,4] (note because the RCA broadband seismometers are buried, they have lower noise levels at higher frequencies than the Cascadia Initiative instruments [1]).

Most recently, Morton et al., [4] examined data from the Cascadia Initiative [7] and the RCA. Shallow earthquakes are focused in the area of a subducted seamount [1-3] and another cluster to the north (Fig. 1b and c). Based on earthquake locations, they suggest that subduction of the seamount produces stress heterogeneities, faulting, fracturing of the overriding Siletz terrane (old oceanic crust) (Fig 1b), and fluid movement promoting seismic swarms. Because this area is the most seismically active area along the Cascadia margin, it is an optimal area to examine the impacts of local earthquakes on, for example, gas hydrate deposits and fluid expulsion.