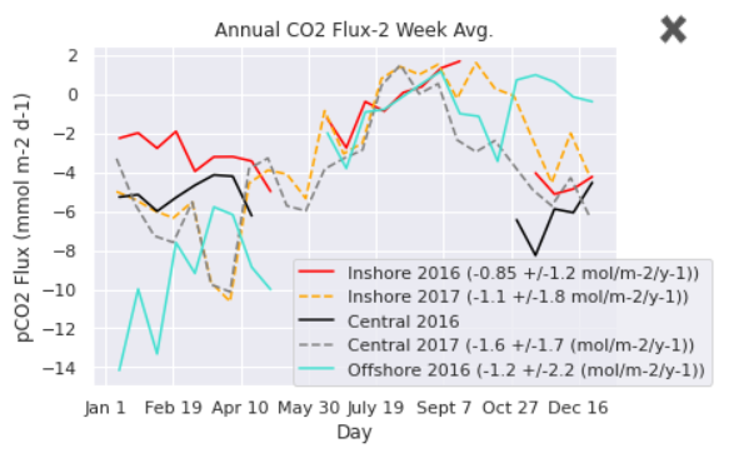 Figure 23.  Weekly average air-sea CO2 flux estimated for the Pioneer Array Inshore, Central and Offshore moorings during 2016 and 2017. A negative flux is from the atmosphere to the ocean. From Thorson and Eveleth (2020).

In the summer of 2020 the Rutgers University Ocean Data Labs project worked with the Rutgers Research Internships in Ocean Science to support ten undergraduate students in a virtual Research Experiences for Undergraduates  program. Two weeks of research methods training and Python coding instruction was followed by six weeks of independent study with a research mentor.

Dr. Rachel Eveleth (Oberlin College) was one of those mentors. Already using some of the Data Labs materials in her undergraduate oceanography course, she saw an opportunity to leverage the extensive OOI data holdings to engage students in cutting edge research on a limited budget during a time when her own field work was curtailed due to the COVID-19 pandemic. Dr. Eveleth advised Alison Thorson from Sarah Lawrence College (NY) and Brianna Velasco form Humboldt State University (CA) on the study of air-sea fluxes of CO2 on the US east and west coast, respectively.

Preliminary results were presented at the 2020 Fall AGU meeting. A poster authored by Thorson and Eveleth (ED037-0035) evaluated pCO2 data from the three Pioneer Array Surface Moorings during 2016 and 2017. They showed that the annual mean CO2 flux across all three sites for the two years was negative, meaning that the continental shelf acts as a sink of atmospheric carbon. The annual average flux was -0.85 to -1.6 mol C/(m2 yr), but the flux varied significantly between mooring sites and between years (Figure 23). Investigation of short-term variability in pCO2 concentration concurrent with satellite imagery of SST and Chlorophyll was consistent with temperature-driven, but biologically damped, changes.

A poster by Velasco, Eveleth and Thorson (ED004-0045) analyzed pCO2 data from the Endurance Array offshore mooring. Three years of nearly continuous data were available during 2016-2018. The seasonal cycle showed that the pCO2 concentration in water was relatively stable and near equilibrium with the air in winter, decreasing in late spring and summer (Figure 24). Short-term minima in summer were as low as 150 uatm. Like the east coast, the mean air-sea CO2 flux was consistently negative, meaning the coastal ocean acts as a carbon sink. The annual means at the Washington Offshore mooring for 2016, 2017 were -1.9 and -2.1 mol C/(m2 yr), respectively. The seasonal cycle appears to be strongly driven by non-thermal factors (on short time scales), presumably upwelling events and algal blooms.

These studies, although preliminary, are among the first to use multi-year records of in-situ CO2 flux from the OOI coastal arrays, and to our knowledge the first to compare such records between the east and west coast. Dr. Eveleth’s team intends to use the rich, complementary data set available from the OOI coastal arrays to investigate the mechanisms controlling variability and role of biological vs physical drivers.