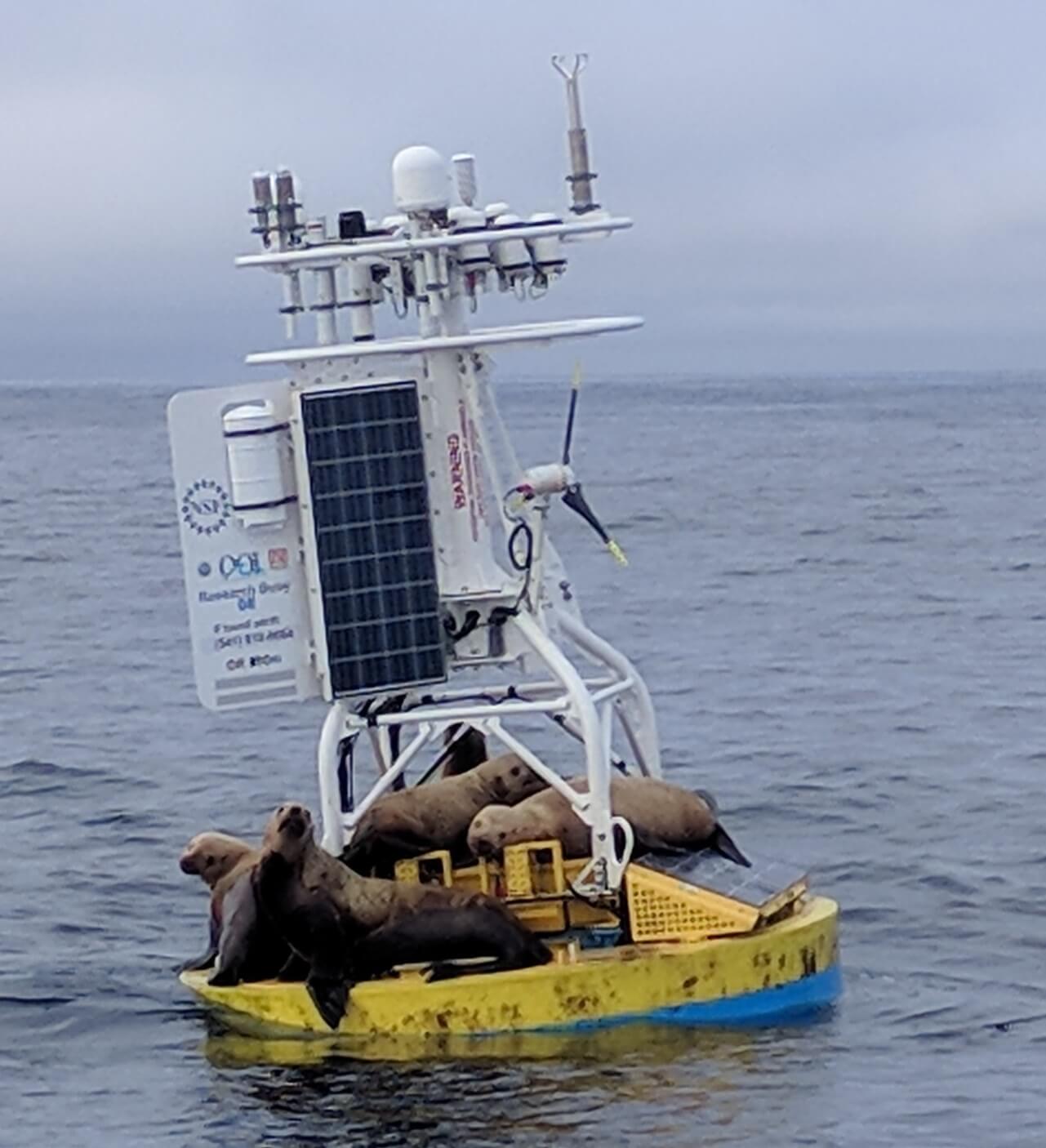 California sea lions take refuge on a Coastal Endurance Array mooring. They can weigh up to 1,000 pounds.  Endangered male stellar sea lions, which breed in the area, can weigh up to 2,500 lbs! Two of the four solar panels can be seen – one oriented vertically next to the wind vane and another on the buoy deck to the right of the rightmost sea lion.Credit: Coastal Endurance Array team.

Sea lions intermittently visit the Coastal Endurance Array moorings off the coast of Oregon, where they lounge, bask in the sun, and “do their business.”  These visits create two problems for the optimum functioning of the instrumented arrays.  Because sea lions are heavy, some weighing up to 2,500 pounds, the solar panels upon which they rest need to be strong enough to bear this weight. And, excrement left behind by these itinerant visitors smears and shades the solar panels, making less power available for the ocean observing instrument attached to the arrays.

This intermittent excrement-related shading compounds an existing shading problem caused by the perpetual movement of the moorings. The halos at the top of the moorings cast shadows over the panels below, resulting in a significant power loss. If ten percent of a solar panel is covered in shadow, for example, its output can drop by as much as 70 percent. When sea lions take refuge on the solar panels this loss is exacerbated. Their excrement, at times, can cover up to 30 percent of the panels, virtually wiping out the power generating capability of the panels. Luckily, this coverage results in only a temporary power shortage as wind and seawater ultimately wash away the remains of these visits.

OOI Engineers John Reine and Marshall Swartz of OOI’s Engineering Team put their heads together to tackle these problems. They first addressed the shading issue.

“These moorings are never still,” explained John Reine, Senior Engineer and lead of OOI’s Electrical Refurbishment Team. “In response to wave and wind-driven motion, the masts are always going back and forth, about three times per minute, casting shadows as they move. So this constant movement of shade, no shade, shade, no shade, produces a sort of alternating current from the panels. I went to Marshall and asked how do we fix this?”  (John Reine explains the problems and fixes in the video below).

Solar panels are made up of lots of little solar cells, normally connected to each other so the power flows seamlessly from cell to cell.  The Engineering Team recognized that by modifying the panel’s internal circuitry, it could easily harvest more of the available light.  They proposed a solution to triple the number of bypass diodes, switches that would ignore shaded cells and move the power to the next operational cell in this field of cells. The manufacturer built a prototype based on an high efficiency cell design,  inserting additional diodes, and tested the upgraded array. Tests at the manufacturer’s verification facility and at WHOI showed the modified design exceeded expectations.

Timing was opportune. The original solar panels had exceeded their design lifetime and needed to be replaced, but were no longer in production. The team seized on this opportunity to seek out panels incorporating more efficient cells, wired into a circuit proven to minimize shading energy losses, while also bearing the weight of the itinerant visitors.

The task fell to Swartz to find a solar manufacturer able to incorporate the bypass diodes into the panel design. He worked under the proviso that OOI prefers to buy things off the shelf so as to make repair and replacement easy, affordable, and virtually seamless, when needed.

“Such off-the-shelf solutions have worked out well for us,” said Swartz. “As it turned out, we found a supplier, SBM Solar, in North Carolina that does a lot of work with the military, including high-efficiency solar panels. Working with the president and chief engineer of the company, who was very willing to help us customize a product, we came up with a design having a string of 36 cells in the panel. We specified circuitry with bypass diodes so that when any group of four cells gets shaded, they are bypassed and the rest of the cells in the panel can continue to provide unrestricted power to the buoy.

“Just by making this small change, we significantly improved the total energy harvest in a simulated condition by 50 percent, “ Swartz added.  What this means in practical terms is that the solar panels can now harvest useful power from almost any light condition –whether it is the reflected light off the surface of the water, low incidence light at sunset, and light that is filtered through the clouds during an early gray day.

Jokingly, he added, “ These panels basically follow the principle of ‘whenever I have the opportunity to make electricity, I’m going to do it’.”

The new panels also passed the weight-bearing problem for the array’s visitors.  While the old panels were glass and subject to occasional cracking, the new panels are an aluminum polyester Teflon sandwich, with the solar cells in between the top and bottom layers. This new configuration is much lighter (27 pounds vs 45 pounds for the glass panels), more rugged, and more resilient to the ever-changing at-sea conditions than the glass version it is replacing.

The new panels are also flexible, rather than rigid like glass, which created another challenge to for the Engineering Team. They designed a special back for the panel with struts to provide greater support and more weight distribution as the 2,500-pound visitors flop onto the arrays.  The lighter weight of the panels is giving the team more flexibility in placement of the panels on the moorings.

Said Reine, “We are so pleased to have these new and improved “off-the-shelf” solar panels operational.  Two panels are now in place on Pioneer Array moorings, and another eight panels have been shipped to the Endurance Array, where they will be greeted by their 2,500-pound interlopers.”