By all counts, the Pioneer Array 16 expedition was a huge success. The scientific team was able to accomplish a full mooring service cruise in spite of COVID-imposed restrictions that restricted building occupancy for pre-cruise preparation, limited personnel onboard to accomplish the work and imposed a two-week quarantine period prior to boarding the ship.

“It’s always takes a focused effort from many people for a successful cruise, but COVID has made it harder.” said Al Plueddemann, chief scientist for Pioneer Array and principal investigator for the Ocean Observatory Initiative’s (OOI) Coastal and Global Scale Nodes. “The OOI team, the captain and crew of the Armstrong, and the shore-side support all put in a great effort to see this through to completion, while still operating at reduced efficiency under ongoing COVID-19 restrictions.”

A variety of atmospheric and oceanographic measurements are made prior to deployments and following recoveries for validation of mooring, glider, and AUV (autonomous underwater vehicle) observations. The team also conducted cross-shelf and along-shelf CTD surveys and collected water samples adjacent to all the moorings. The team also surveyed the array’s region using shipboard sensors (ADCP, EK-80, and thermosalinograph).

In addition to the successful mooring operations, the Pioneer 16 team completed several mobile platform objectives as well.  For the spring and summer time period, two coastal profiling gliders were deployed to replace winter profiler moorings.  Two global test gliders were also put through their paces to ensure safe operation and reliable data delivery prior to operations at a global array. Two AUVs were launched and traveled pre-determined paths around the array before being recovered and having their data downloaded.  While the team was following the AUVs to ensure the missions were progressing as planned, they encountered a pod of about 40 pilot whales that included both young and adult whales. The team and the pod of whales were equally fascinated by each other. Both groups stopped to observe the other’s behaviors. 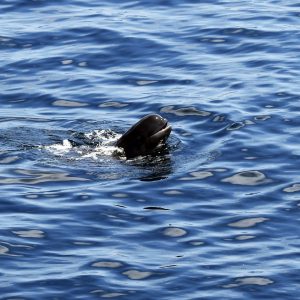 “The data we collect are helping scientists better understand the ocean environment and how it is changing.  Seeing the pilot whales reminded us of the importance of these observations, and the research they enable, to the marine ecosystem.” added Plueddemann.