Recognizing that freely accessible ocean observatory data has the potential to democratize interdisciplinary science for early career researchers, Levine et al. (2020) set out to demonstrate this capability using the Ocean Observatories Initiative.  Publicly available data from the OOI Pioneer Array moorings were used, and members of the OOI Early Career Scientist Community of Practice (OOI-ECS) collaborated in the study.

A case study was constructed to evaluate the impact of strong surface forcing events on surface and subsurface oceanographic conditions over the New England Shelf.  Data from meteorological sensors on the Pioneer surface moorings, along with data from interdisciplinary sensors on the Pioneer profiler moorings, were used.  Strong surface forcing was defined by anomalously low sea level pressure – less than three times the standard deviation of data from May 2015 – August 2018.  Twenty-eight events were identified in the full record.  Eight events in 2018 were selected for further analysis, and two of those were reported in the study (Figure 24). 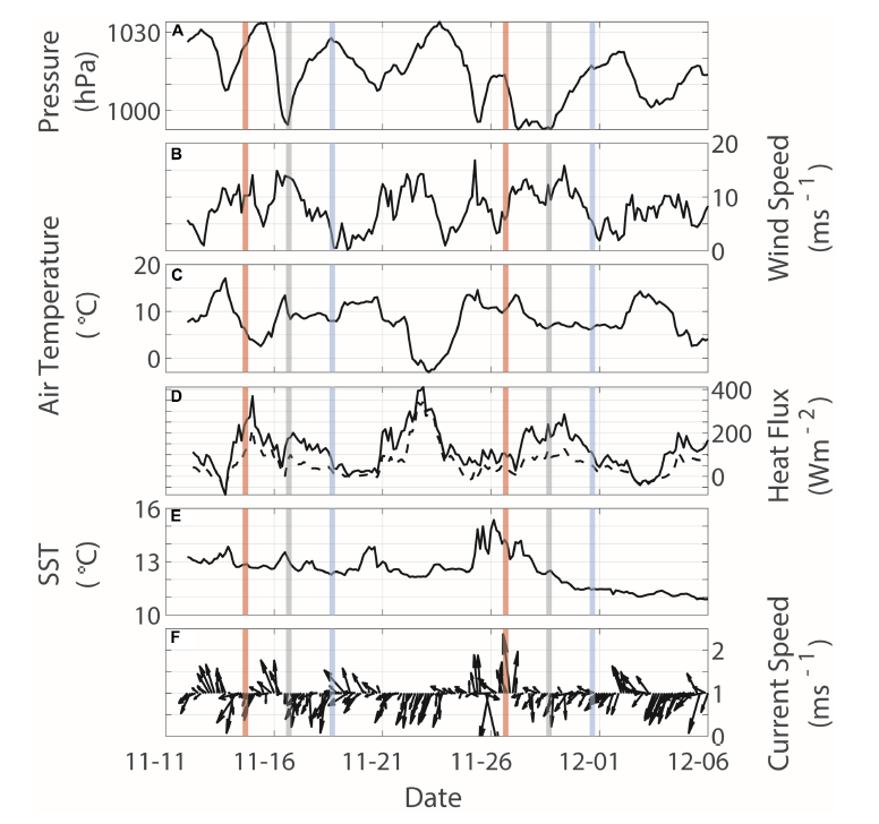 The impact of surface forcing on subsurface conditions was evaluated using profile data near local noon on the day of the event, as well as 48 hr before and after (Figure 24). Subsurface data revealed a shallow (40-60 m) salinity intrusion prior to the 16 November event, which dissipated during the event, presumably by vertical mixing and concurrent with increases in dissolved oxygen and decreases in colored dissolved organic matter (CDOM). At the onset of the 27 November event, nearly constant temperature, salinity, dissolved oxygen and CDOM to depths of 60 m were seen, suggesting strong vertical mixing.  Data from multiple moorings allowed the investigators to determine that the response to the first event was spatially variable, with indications of slope water of Gulf Stream origin impinging on the shelf. The response to the second event was more spatially-uniform, and was influenced by the advection of colder, fresher and more oxygenated water from the north.

The authors note that the case study shows the potential to address various interdisciplinary oceanographic processes, including across- and along- shelf dynamics, biochemical interactions, and air-sea interactions resulting from strong storms. They also note that long-term coastal datasets with multidisciplinary observations are relatively few, so that the Pioneer Array data allows hypothesis-driven research into topics such as the climatology of the shelfbreak region, seasonal variability of Gulf Stream meanders and warm-core rings, the influence of extreme events on shelf biogeochemical response, and the influence of a warming climate on shelf exchange.

In the context of the OOI-ECS, the authors note that the study was successfully completed using open-source data across institutional and geographic boundaries, within a resource-limited environment.  Interpretation of results required multiple subject matter experts in different disciplines, and the OOI-ECS was seen as well-suited to “team science” using an integrative, collaborative and interdisciplinary approach.