The first time Katie Gonzalez went to sea was as a student participant on the 2017 Ocean Observatories Initiative (OOI) annual operations and maintenance Regional Cabled Array (RCA) VISIONS’17 cruise. From that experience, she knew that whatever she did in the future needed to involve the oceans.

Katie recently graduated as a first-generation college student from the University of Washington (UW) with her bachelor’s degree in biological oceanography. But despite her young age, she has amassed a vast amount of sea-going experience. This year marks her fifth time joining the RCA VISIONS cruises, and the third time she has participated in all legs of the expedition.

Last year, when UW limited the number of people who could go on the cruise due to COVID restrictions, Katie was one of only two student participants aboard. As restrictions eased this year, she was excited to welcome back her peers as their student ambassador, using her extensive knowledge and experience to mentor the first-time students on how to use the equipment and interact with the scientists and crew aboard the ship. “Compared to the other students, I’ve had so much more prior experience, and that’s definitely been helpful,” she says. “I’m excited to have some new responsibilities.”

This year, she is also a key member of the science party, mentoring the 19 undergraduate VISIONS’21 students on the intense logging operations and acquisition of 4K and digital still imagery in the  remotely operated vehicle Jason control van. 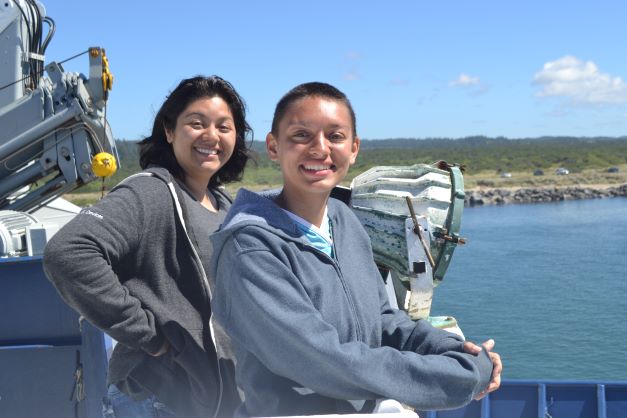 Katie first became interested in oceanography when she was attending high school in Clallam Bay, Washington. During one very memorable science class, Dr. Deb Kelley, an oceanography professor at UW and PI/Director for the RCA, came to show her class how to make environmental sensors, which they deployed in the school’s garden.

“I knew that whatever I was doing for my thesis, I wanted to use data from the RCA,” she recounts. As a biological oceanography student, she was most interested in biological happenings in the ocean to which she felt a personal bond. That’s when she heard about the RCA hydrophone data. The RCA hydrophones are used to listen for seismic events along the Juan de Fuca Ridge and Cascadia Margin, but they are also constantly bombarded with marine mammal calls, including whale vocalizations. “That was the connection I was looking for,” explains Katie. She decided to investigate fin whale calls at two different sites along the RCA by analyzing the timing and frequency of their calls. She chose to look at vocalizations from the Slope Base (~125 km from the Oregon coast) and the Axial Base (~475 km from the Oregon coast) sites because whales tend to congregate in areas of high bathymetric relief.

Fin whales are considered a vulnerable species because they have been heavily impacted by human activity.

“Looking into what the whales are doing, where they’re going, and how they’re interacting with their environment will be helpful in guiding the protection of these species,” says Katie.

Working with Dr. William Wilcock, a UW Oceanography professor and a seismologist who has been studying whale calls in the Northeast Pacific for several years, she fed five years of RCA hydrophone data into an algorithm that helped filter out data that matched the frequencies of fin whale calls. She then visualized the data as a spectrogram, which allowed her to make comparisons for frequency correlations.

“That was the moment when everything—the oceanography, the data science, and my human emotion for biological creatures—came together,” she recalls.

The preliminary results of this research showed that the whales appeared at the Slope Base site closer to the continental shelf two to three months earlier in their calling season, before moving out to the far off shore blue water environment of Axial Base. Both sites had their largest volume of calls in January.

Katie has several hypotheses about the seasonal patterns she observed. “They could be following their prey, or coastal upwelling could be providing them with more food closer to the shelf during those months. As for why both sites have peaks in January, that’s a question for further research.”

Her thesis detailing her research and its conclusions was published in the UW FieldNotes Journal. 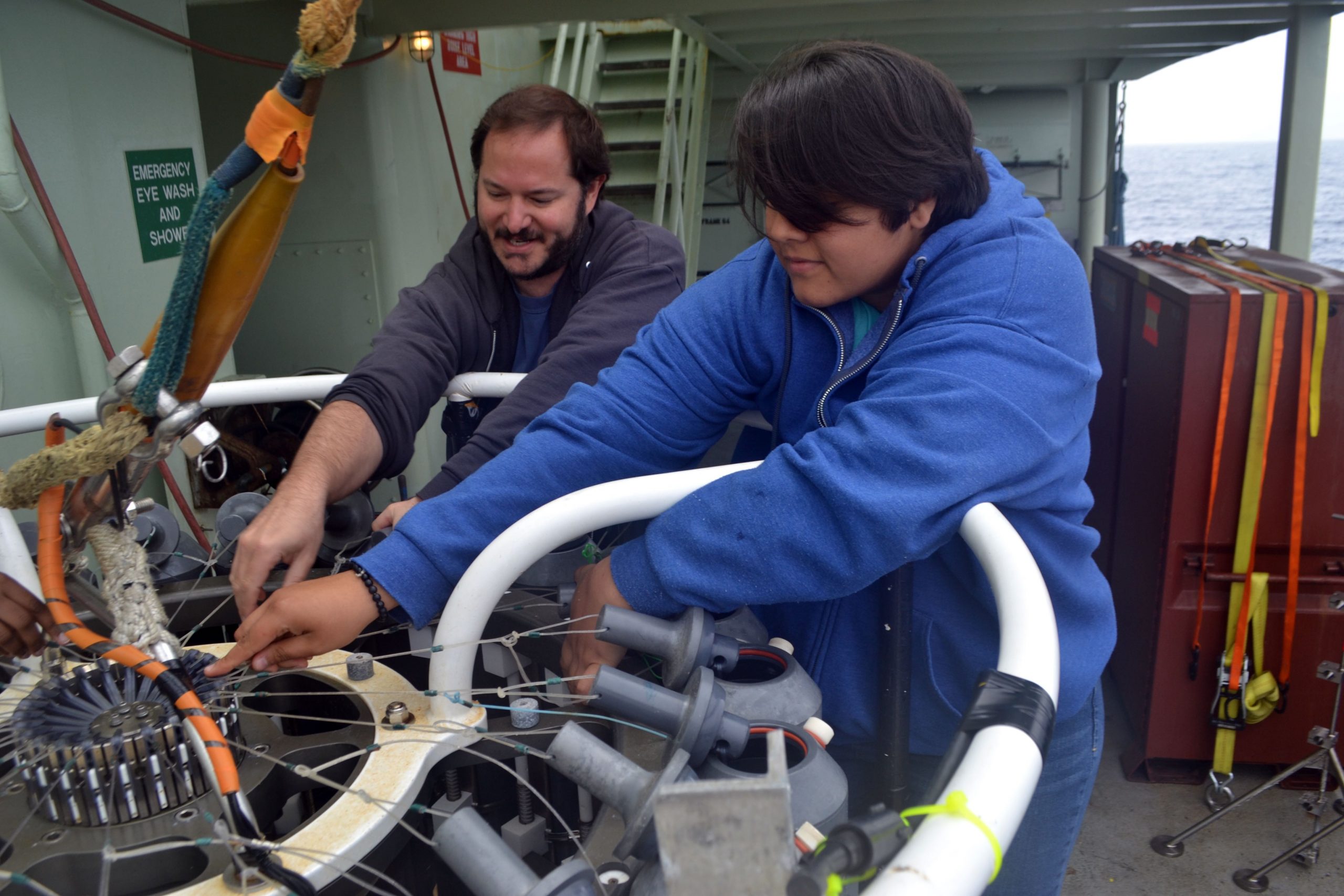 Katie Gonzalez (right) and Mike Vardaro (left) work with the CTD rosette on the VISIONS ’18 cruise. Katie is a key member of the science party on the VISIONS ’21 cruise. Credit: University of Washington, V18. 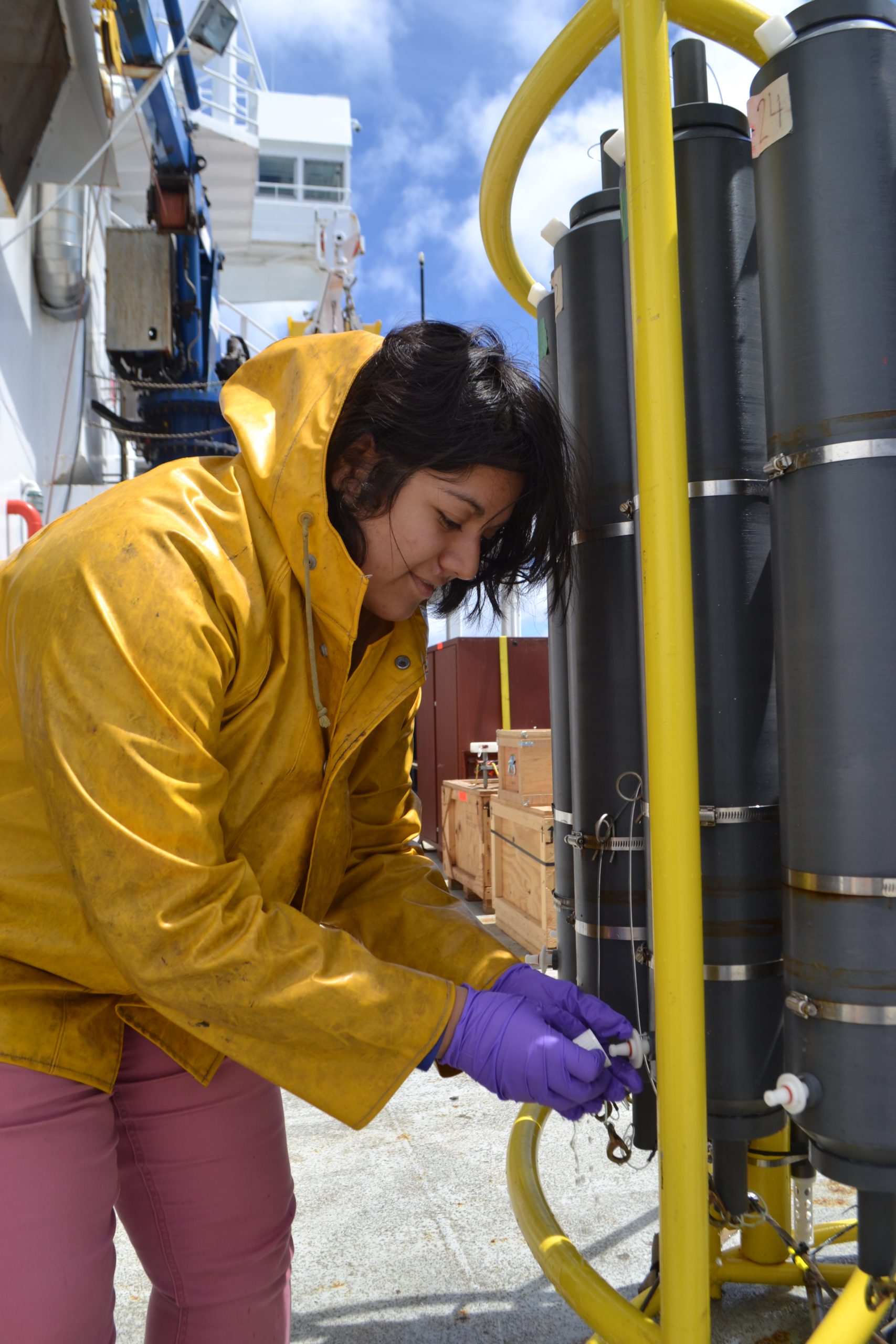 Katie Gonzalez is currently aboard the R/V Thompson, the fifth time she is participating in a research cruise. She has extensive experience in many tasks aboard ship, including the deployment and analysis of CTDs. Credit: University of Washington, V18.