The Northeast Fisheries Science Center (NEFSC) had the opportunity to participate on leg two of the Pioneer Array research cruise aboard the R/V Neil Armstrong. The dates for the second leg this year were November 7 – 15 2021. This time frame was critical for us because our main asset for assessing right whale distribution, the NOAA (National Oceanic and Atmospheric Administration)Twin Otter aircraft was scheduled to depart for the Gulf of St. Lawrence Canada, and would not be available. Since 2010 the distribution of the North Atlantic Right whale has changed significantly, and it has become increasingly important to survey more broadly within the range to determine if there are aggregations of right whales in unprotected areas.

Participating scientists from the NEFSC for this cruise were Chris Tremblay and myself, Pete Duley. Chris was brought on for his expertise in acoustics, specifically with the deployment and monitoring of sonobuoys for the detection of North Atlantic Right whales and other large baleen whales. This additional element to our research plan was added to detect right whales in weather when visual observations were not ideal, and to access call types associated with different behaviors from observations with right whales in good visual conditions. Deployment of sonobuoys were conducted with very low or no impact to the mission of the work on the Pioneer array.  November 12 was the only day of the entire cruise in which we were unable to conduct visual observations due to the weather. The Northeast U.S Shelf Long Term Ecological Research (NES-LTER) group was conducting a CTD survey across the shelf break and we used this opportunity to make four sonobuoy drops in association with their survey. We are still analyzing the acoustic recordings form the cruise, but at this point feel that they were a valuable addition to the research.

Sonobuoys are launched by hand from the back deck, once permission has been granted by the bridge. The instruments are not meant to be retrieved and can record for up to eight hours. The instruments send information from their hydrophones by VHF transmission (line of sight) to an antenna mounted on one of the upper decks (01), and scuttle themselves after eight hours of recording. 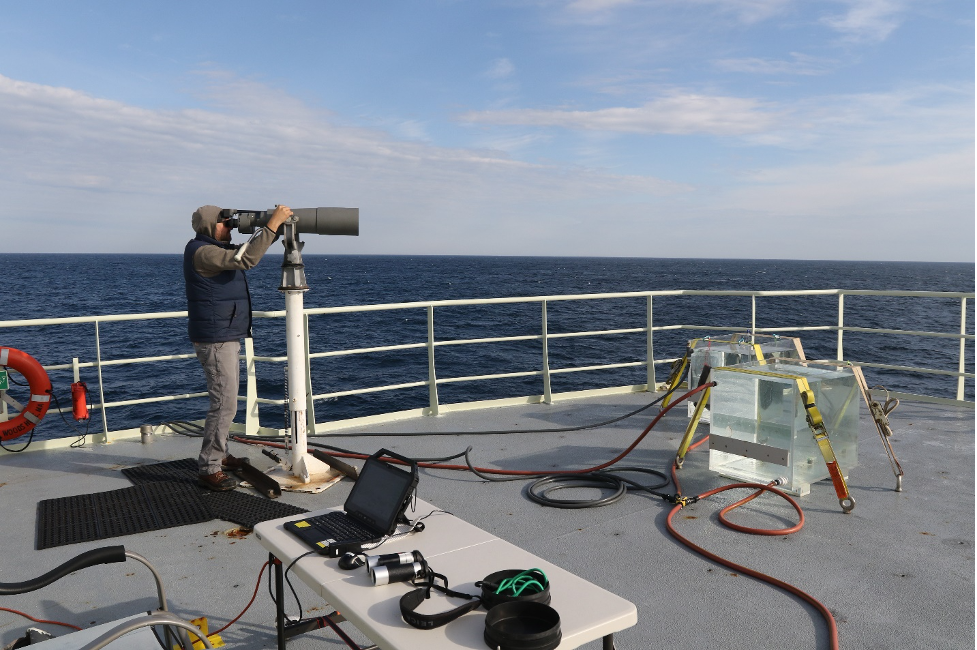 Marine mammal visual operations aboard the Neil Armstrong were conducted from the 01 Deck. Our Bigeye stand would not fit the predrilled holes in the 01 deck and this required Kyle Covert, the ship’s welder,  to manufacture some iron fasteners to secure the stand and Bigeye binoculars. This issue was fixed during the staging prior to our departure and worked quite well. The marine mammal observation deck (deck 02) was unavailable to us this year because of Bigeye stand mounting issues. There are plates welded into the deck for the stands, but no predrilled bolt pattern in the deck. The marine mammal deck also has a desk with access to the ship’s SCS (Sea Control Ship) feed, and offers a better vantage point because it is higher. However, even while working in higher sea states we were unaffected by spray from the bow on the 01 deck, and this worked out quite well for this cruise. We brought with us a small desk, some deck chairs, and ratchet straps for securing everything.

The crane on the 01 deck is on the starboard side and caused a slight visual obstruction in panning from 090 to 270 degrees. The location of the Bigeyes aft on the port side, however, provided good visibility nearly to 180 degrees on the port side, which proved useful when stationary during the Pioneer Array mooring deployments and recoveries. We recorded whales aft of the ship during several of these stationary observation periods. Visual observations while underway were conducted from 07:30 to 16:45 and observers rotated from the Bigeyes to the recorder position on the half hour. At the locations where the ship was stationary working on mooring operations for extended periods of time, Chris and I did a scan of the area every 15 minutes. We are still working on analyses of the visual data, and although we did not observe any right whales during the Pioneer 17 cruise we feel that the ship is a great asset for our work and would love for the collaborative effort to continue. Thank you so much for the opportunity to participate this year! 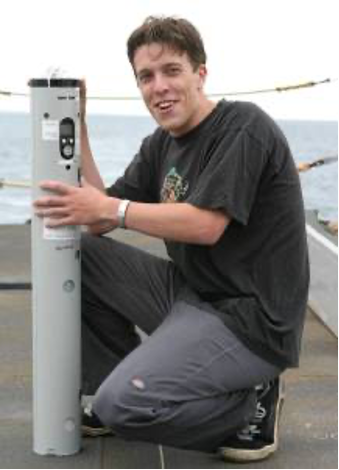 This stock image shows the size and dimension of the sonobuoy instrument.