Deployed 140 miles east of the southern tip of Greenland and three miles south of the Arctic Circle, the Irminger Sea surface mooring floats on a cold empty sea named for a Danish naval admiral few people have heard of, in a location that few people could point to on a North Atlantic chart. The Irminger Sea is delineated less by coastlines or geographic basins and more by what is taking place within the deep ocean here, processes only visible with the aid of deep-sea instruments. To oceanographers and climate scientists the region is a confluence of ocean currents where heat carried from the topics gets extracted and cold water sinks into abyss like few other places worldwide and with climate-changing impacts.

Like most high-latitude oceans, storms are frequent and strong. Some storms migrate northeast from the mid-latitudes. Other storms are born here and then mature to impressively violent conditions influenced by the distant high mountains and massive Greenland icecap. Gale-force winds and steep-faced ocean waves spread east over a wide cone from the tip of Cape Farewell. The ice pack around Greenland ejects icebergs, some washing far out to sea where they threaten vessels. Cold air and sea spray build layers of heavy ice on exposed surfaces and instrument sensors. Other oceans can be found with higher waves, some have colder weather, but in few places do storms intensify so quickly, occur as often, and happen in a place so vital to planetary climate. Right where the storm forces are the strongest is also the perfect place for a tower packed with weather instruments.

The Irminger Sea mooring is designed to collect data in this stormy world where meteorological and ocean measurements, especially at the surface, are rare and hard to sustain. The mooring is recovered and a new one put in its place once a year, typically during the short summer month of July when weather conditions are calmest. At more than 4 meters high, the surface mooring tower is heavily instrumented with meteorological sensors and communication antennas, and the surface float is filled with data loggers and redundant computing elements and controllers that collect, store, and transmit data to shore. In total about four tons of floating equipment is anchored to the bottom by a 1.5-mile cable studded with dozens of instruments sampling the deep interior of this sea. To power everything, the buoy float is packed with rechargeable batteries, fueled by solar panels and wind turbines on the buoy tower. Strong winds are usually welcome because they rapidly re-charge the battery packs. Sometimes, however, these can be too much of a good thing. 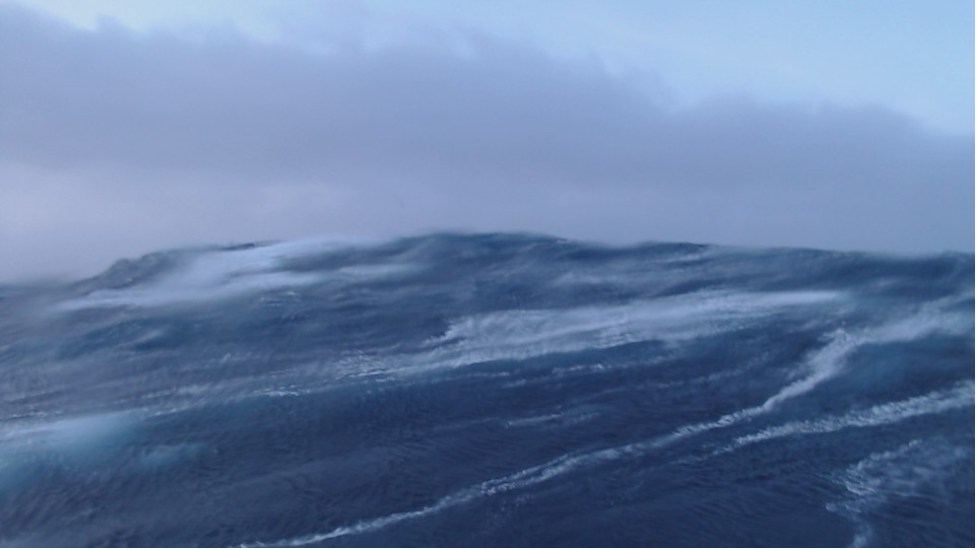 A recent storm during October 18-19, 2021, was one such time. The mooring was battered by wind speeds exceeding 35 knots (gale force) for almost 24 hours, with some topping out above 50 knots. Heavy storm seas built up and stacked upon themselves for hours. At the storm’s peak, about one third of the highest waves were above 15 m (49 ft). Picture heaving an 8000 lb. surface mooring 80 ft up and down on a tilt-a-whirl ride that never stops. Waves this high can bring tons of water crashing down.  Towering waves were recorded, some reaching up to 20-25 m (66-82 ft), so high they approached the limits of our instruments.

The Irminger Sea continues to test our ability to “weather harden” instruments in stormy parts of the world. From November to March, daylight is fleeting, the sun hovers near the horizon and solar panels trickle out only a few milliamps. For the next few months, many of the instruments in the ocean interior and on the tower will continue to sample, each instrument powered by its own small battery. The Irminger surface mooring will communicate once each day, a tiny burst of data with vital signs, until spring returns and the sun revives the cold battery packs. 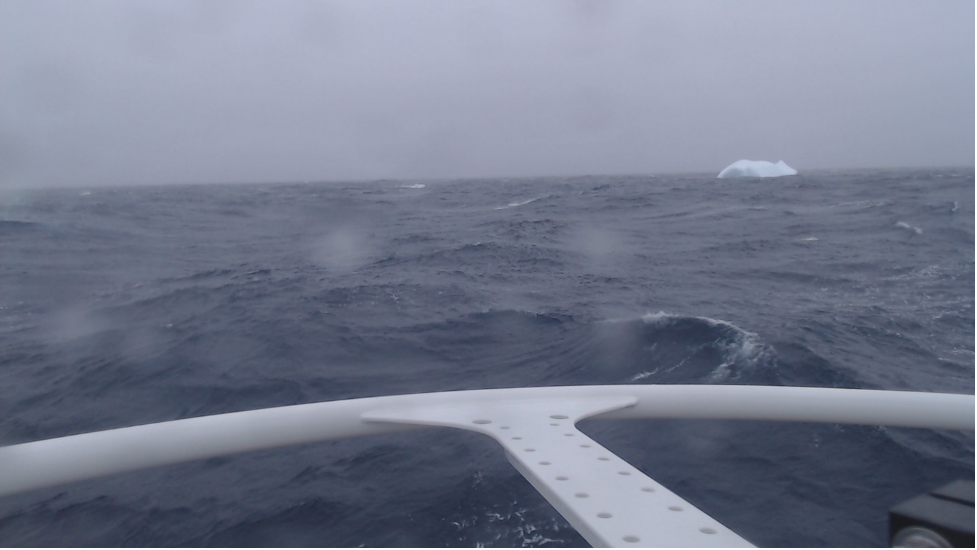 The 2021 storm demonstrated, yet again, the challenges of working in the Irminger Sea. Yet, it also demonstrated the remarkable robustness of the OOI moorings in such extreme conditions. Ocean and meteorological measurements gathered by the Irminger Sea mooring during such storm events are extremely valuable for understanding oceanography and climate processes. Equally important is the invaluable experience gained that will drive continued improvement in the accuracy and durability of instruments deployed under such extreme conditions, with consequent increases in knowledge. 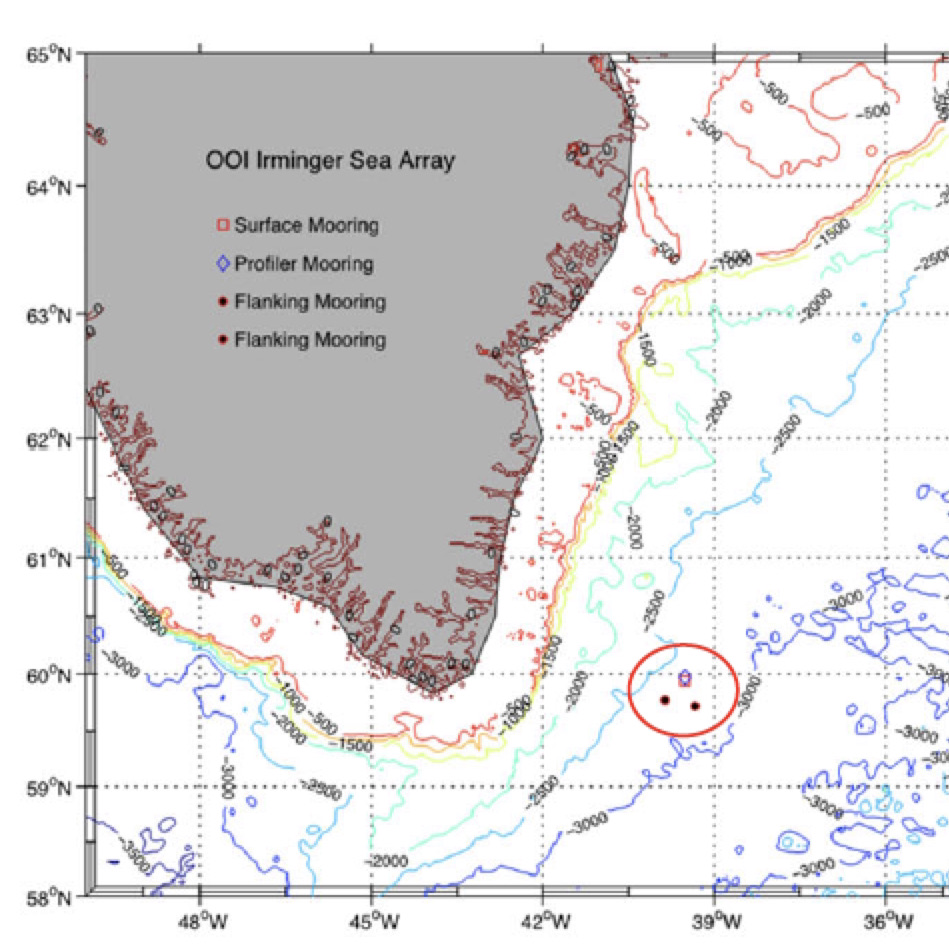 The Irminger Sea Surface Mooring is deployed 140 miles east of the southern tip of Greenland and three miles south of the Arctic Circle. 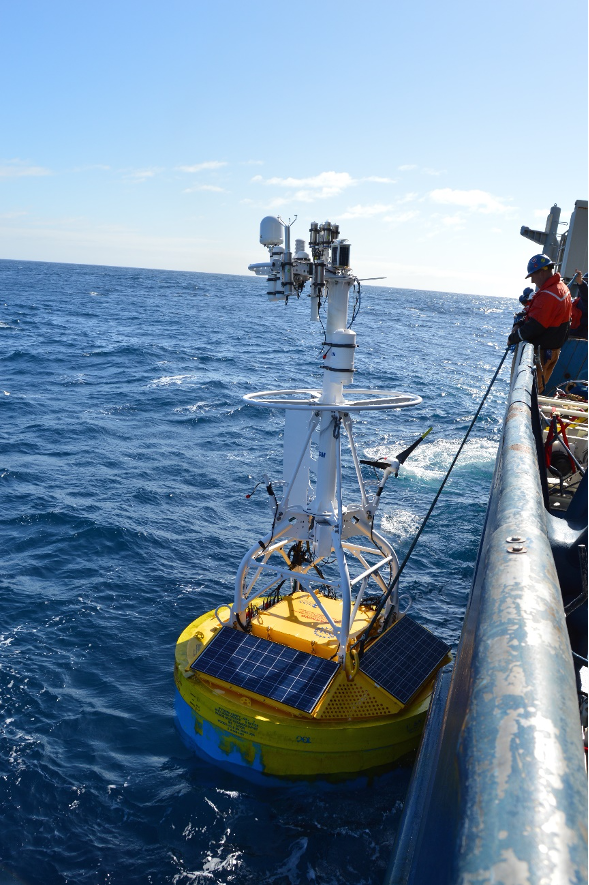