New RAFOS Ocean Acoustic Monitoring (ROAM) tags have recently been designed to allow geolocation of underwater assets, including pelagic fishes, over large areas in the ocean and even deep into the ocean’s twilight zone. 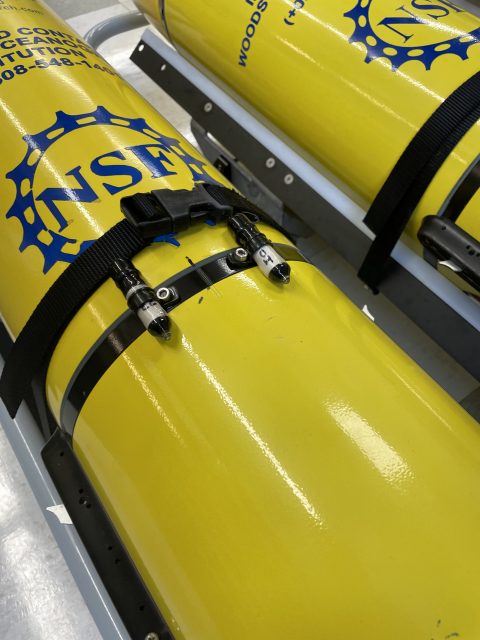 The ROAM tag is small (30 mm x 10 mm) and light enough (8 gm in water) to be attached to an ocean glider with no adverse impacts on performance. Here are two ROAM tags attached to OOI test glider 363 before deployment from the R/V Armstrong during the Pioneer 17 cruise. Credit: ©WHOI, Diana Wickman.

An opportunity to test the new ROAM tags arose in conjunction with the October 2021 Pioneer Array mooring service cruise. “We had recently deployed moored sound sources in deep water between Cape Cod and Bermuda,” said Simon Thorrold who, with University of Rhode Island colleagues Melissa Omand and Godi Fischer, is leading the ROAM fish tag development. “One of our goals was to determine whether tagged fish near the continental slope south of New England could be detected using these distant sources.” Thorrold reached out to the OOI team to see if there was potential for a short-term test at the Pioneer Array site, located 75 nautical miles south of Martha’s Vineyard at the shelf-slope interface.

OOI Project Scientist Al Plueddemann and the OOI glider team determined that a glider test planned during the mooring service cruise in late October would be happening at the right place and the right time to be useful for testing the acoustic tags. “This technology is something we would like to consider for OOI, and in particular for the Pioneer Array in its new southern Mid- Atlantic Bight location,” said Plueddemann, “so the potential for a test was of interest to us.”

The glider team determined that the small (30×10 mm), light (8 gm in water) tags would have no measurable impact on glider performance and could be safely accommodated on the test glider. The tags were mounted to the glider by fitting the tags into plastic loop clamps and then securing the loop clamps to existing threaded holes in the glider hull. During the three-day test deployment, the glider made one dive to 50m, one dive to 200m, three dives to 500m, and approximately 76 dives to 200m.

The glider data and acoustic tag data are being evaluated, and will provide information about fish tag performance and the potential for future use within the OOI arrays.