Marine heat waves are sustained, anomalous ocean warming events with significant regional extent.  In some cases, these heat waves are driven by heating from the atmosphere.  In new work (Chen et al. 2022), it is shown that ocean processes can also be responsible for marine heat waves.  In this case, the presence of anomalously high temperatures on the New England shelf was detected by CTD observations made by commercial fishing vessels.  The fishing vessel CTD data indicated that the heat wave was a “compound event”, i.e. one with large anomalies in both temperature and salinity.  Because atmospheric heating would drive only a temperature anomaly, and because the Gulf Stream derived slope water offshore of the New England shelf is high in both temperature and salinity, it was surmised that this heat wave was driven by ocean advection. 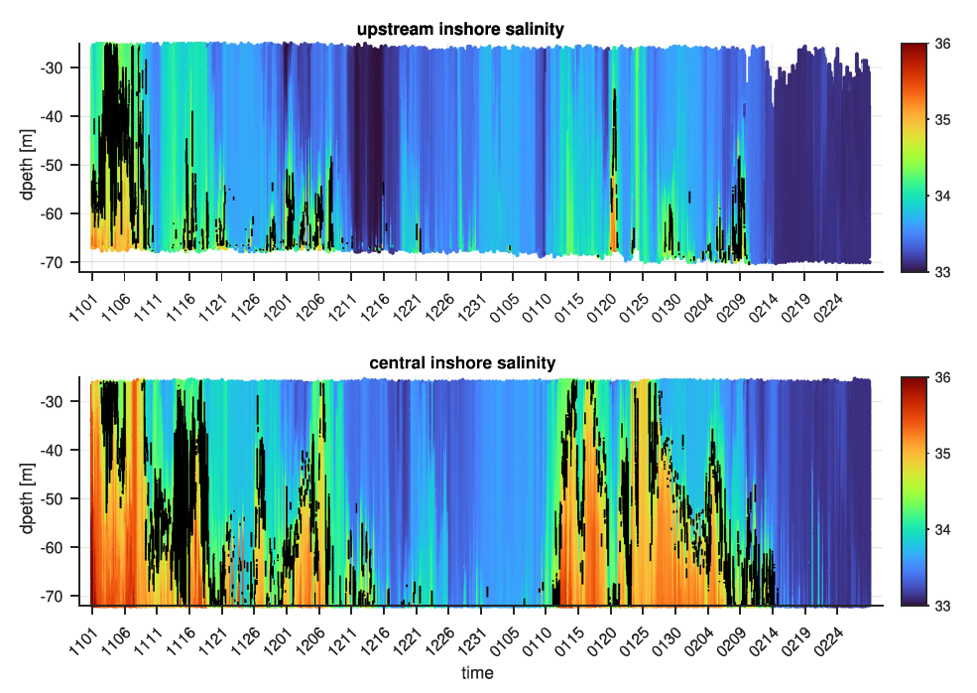 Figure 23. Salinity contoured vs. depth and time for the Pioneer Upstream Inshore (PMUI) and Central Inshore (PMCI) profiler moorings from November 2016 to February 2017. The 34.5 isohaline is marked in black to highlight the boundary between the shelf and slope waters.

The authors used data from Pioneer Array profiler moorings (PMUI and PMCI) to support this ocean advection hypothesis.  Salinity records (Figure 23) show high salinity events in Nov/Dec 2016 and Jan 2017.  The salinity anomalies are indicative of slope water (S > 34.5), are most intense at the bottom, and are more pronounced further offshore.  This is consistent with a bottom intensified intrusion of warm, salty slope water onto the shelf to initiate the heat wave observed by the fishing fleet CTDs in January of 2017.

Further investigation was done to understand the cross-shelf exchange process, which presumably originated at the shelfbreak and penetrated large distances onshore as a bottom intrusion.  The principal tool for the additional analysis was a new high-resolution regional model.  The model was able to reproduce major features including shelf water properties, the shelf break front, and warm-core rings in the slope sea .  Critically, the model showed the presence of cyclonic eddies (opposite in rotation, thinner and smaller than the warm core rings) that were responsible for driving cross-shelf flow and intensifying the front.  The authors argue that these processes precondition the outer shelf by bringing warm salty water to the shelf break, i.e. roughly the 100 m isobath.

Another step is necessary to produce the dramatic, bottom intensified intrusion of warm salty water to ~50 m depth, as seen in January 2017.  Further examination of the model, including runs with and without wind forcing, indicated that persistent upwelling-favorable winds along with topographic effects were the additional ingredients necessary to cause the dramatic intrusion.  Although some onshore penetration results from the standard “two-dimensional” wind-driven upwelling, the authors found that details of the three-dimensional regional topography were critical to extensive slope water penetration in the form of a warm, salty, bottom-intensified tongue.

Identifying the unusually strong intrusion and finding the hints to a slope-sea origin shows the importance of sustained observing, in this case from both the Pioneer Array and the fishing fleet.

Unraveling this remarkable, multi-step process, with pre-conditioning by small-scale cyclonic eddies followed by a topographically-controlled, wind driven response, is a testament to the power of high-resolution models to fill in dynamical gaps in the observing systems.  The authors note that “this study provides dynamical explanations of the observed water mass anomalies across the shelf, offers new insights about cross-shelf exchange…  and lays the ground work for future studies.”