The Pioneer 18 Array team and crew of the R/V Neil Armstrong pulled into the dock at Woods Hole, MA, on April 27, a day earlier than expected, having completed all objectives of the expedition. Their mission included the last deployment of the Pioneer Array at its current location on the New England Shelf. The Pioneer Array components now in the water will be recovered in November 2022 and redeployed in the Southern Mid-Atlantic Bight in the Spring of 2024.

The expedition consisted of two legs. On leg #1, three Coastal Surface Moorings and multiple gliders were recovered and deployed and autonomous vehicle missions were completed. On leg #2, the team deployed five Coastal Profiler Moorings. Three Coastal Surface Moorings and seven Coastal Profiler Moorings were recovered, two of which could not be recovered during an earlier expedition because of weather conditions. The recovered equipment will be taken apart, refurbished, and in some cases, reconfigured for deployment at the new location.

Weather conditions allowed for multiple deployments of a remotely operated vehicle, to help assess the condition and assist in the recovery of mooring components that could not be recovered by standard techniques (using an acoustically-triggered release). The team also conducted additional activities that ranged from water sampling adjacent to the moorings to cross-shelf CTD (connectivity, temperature, and depth) surveys in the vicinity of the moored array, and surveys using shipboard sensors. A variety of ancillary activities, accommodating eight participants from five different institutions, were also facilitated during the cruise.

Al Plueddemann, Principal Investigator of the Coastal and Global Scale Nodes (CGSN) and Chief Scientist of Pioneer 18 said, “The successful completion of this expedition again demonstrates the capabilities and experience of the CGSN team and the R/V Armstrong, and bodes well for successful operation of the Pioneer Array in its new location in the Southern Mid-Atlantic Bight.” 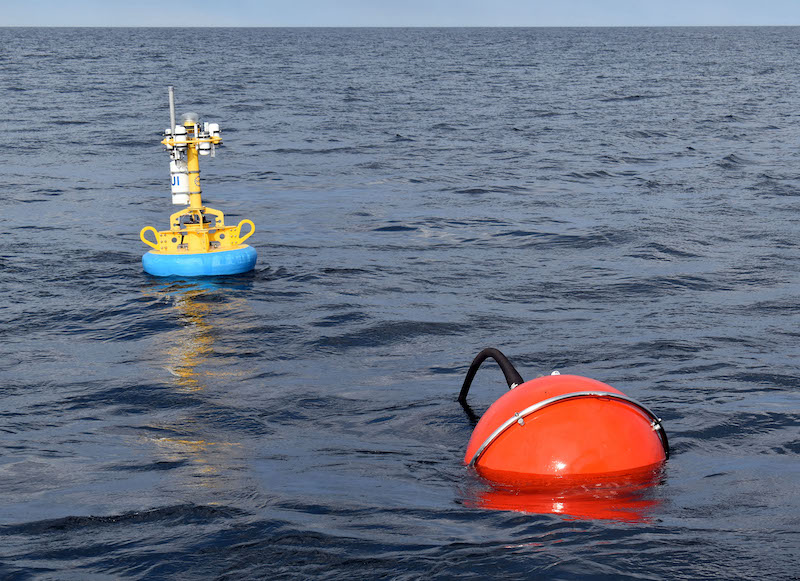 The Coastal Profiler Mooring shown here, PMUI-17, will be the last Pioneer mooring deployed on the New England Shelf. After providing data through the summer and early fall, the current array will be recovered in November of 2022 and relocated to the Southern Mid-Atlantic Bight in 2024. Credit: Jess Kozik©WHOI.

The Pioneer Array was originally commissioned in 2016 as a re-locatable coastal array suitable for moderate to high wind, wave and current regimes on the continental shelf and upper slope. The new location in the Southern Mid-Atlantic Bight was decided upon after a series of workshops in 2021, co-sponsored by the National Science Foundation and the Ocean Observatories Initiative Facility Board, to gain community input on a new location that would best address pressing science questions.

Plueddemann added, “The Pioneer Array has collected a remarkable data set from the New England Shelf, which scientists will continue to use to understand frontal dynamics and related ecosystem impacts in this important and dynamic region.” 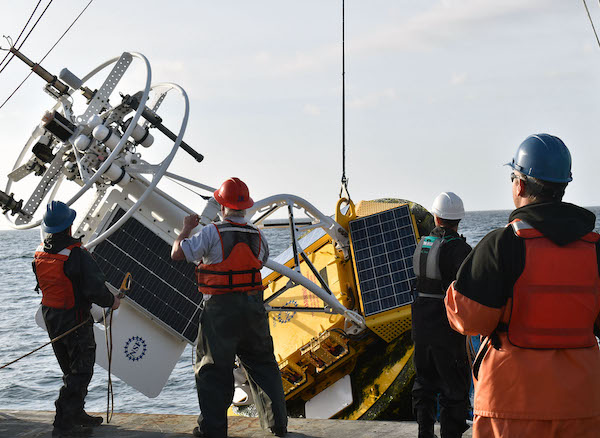 When the large Coastal Surface Mooring buoys are recovered everyone pays close attention. The buoy tower spins when the hull is picked out of the water, and the deck team needs to be ready with a snap hook to clip into the circular rails on the tower top and arrest the motion. Credit: Andrew Reed ©WHOI.

As the Pioneer 18 team headed home, another CGSN expedition is about to hit the water. A team of scientists and engineers is already traveling to Seward, Alaska to mobilize for another OOI expedition. On May 12, they will be aboard the R/V Sikuliaq for a 19-day expedition to the Global Station Papa Array, in the Gulf of Alaska, about 620 nautical miles offshore. This team will deploy five moorings — three for OOI and one each for the National Oceanic and Atmospheric Administration and the University of Washington. Once on site, the team will first deploy the moorings onboard, then recover those that have been in the water for a year. Upon completion, the ship will transit to the demobilization port of Seattle, Washington. Bookmark this site, and follow along on their progress. 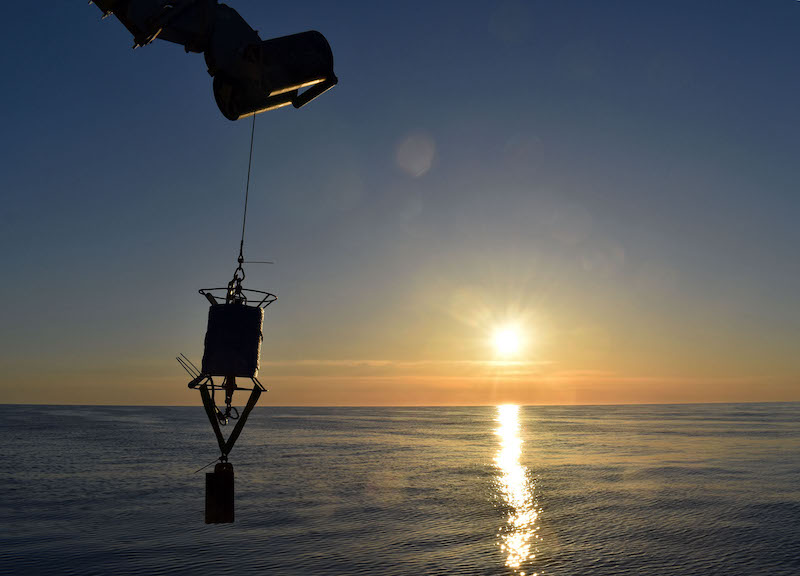