The Hydrothermal Vent Fluid Temperature and Resistivity sensor measures the temperature, resistivity, and Eh of the mineral-rich fluid plumes that emanate from cracks on the seafloor, providing insight into the sub-surface structure and dynamics of these unique habitats. Known as the “Res Probe,” this novel seafloor instrument is designed to go inside the “throats” of high temperature (up to 480°C) black smoker chimneys to measure the resistivity and temperature of the hydrothermal vent fluids. Resistivity is an analogue for chlorinity, measuring the “saltiness” of the vent fluids. Many of the structures at Axial Volcano emit boiling fluids, as reflected by their high temperature and low chlorinity. The white wrapping around the cable prevents overheating of the cable by surrounding hydrothermal fluids, should a change in venting sites occur during the duration of the installation. 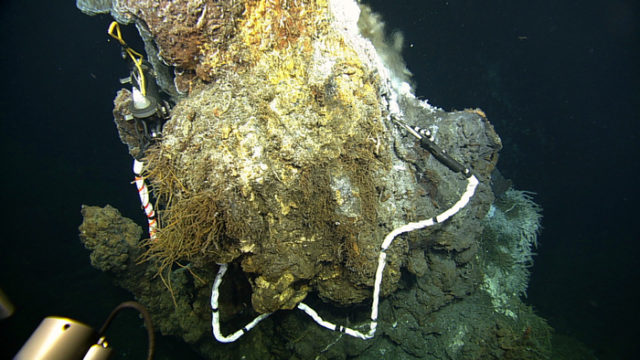 The resistivity-temperature probe was deployed in the 270°C hydrothermal vent called 'Escargot' at the summit of Axial Volcano. Resistivity is an analogue for chlorinity or "saltiness' of the hydrothermal fluids. Boiling is common in these venting environments, governing gas concentrations, metal deposition, and perhaps life. Photo credit: NSF-OOI/UW/CSSF. 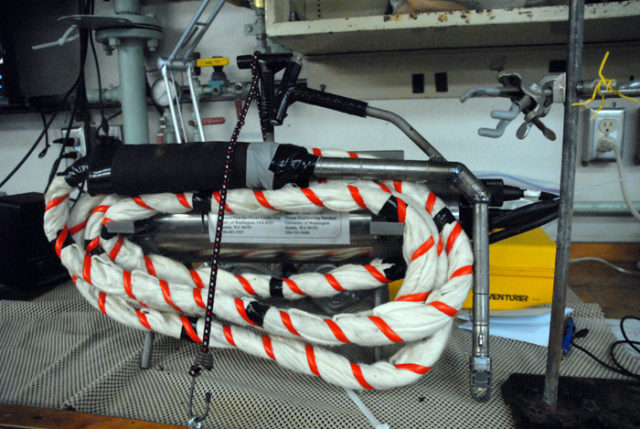 A temperature-resistivity instrument (analogue for chlorinity) being prepared for installation in the International Vent Field at Axial Seamount during Leg 1 of the VISIONS'14 expedition. Photo Credit: Don Setiawan, University of Washington, V14.