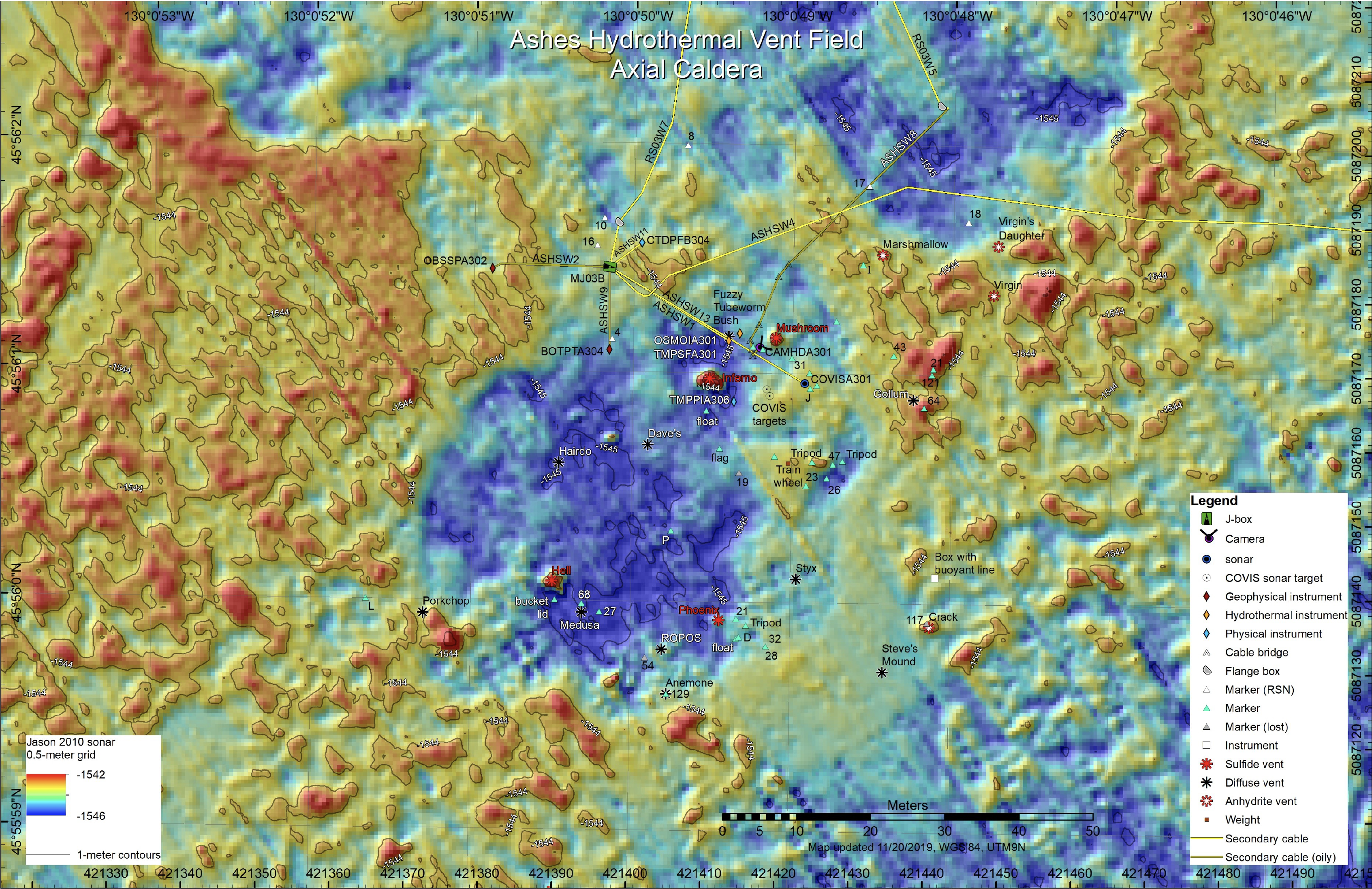 This map shows the location of diffuse and high temperature hydrothermal vents in the ASHES vent field and the location of infrastructure in 2020. Credit: M. Elend, University of Washington.

The Cabled Array Vent Imaging Sonar (COVIS) was originally developed by Russ Light and his team of engineers in the Ocean Engineering department of the Applied Physics Laboratory (APL), University of Washington (UW), in collaboration with scientists at both APL-UW (including Darrell Jackson) and Rutgers, The State University of New Jersey (including Peter Rona and Karen Bemis) to image hydrothermal outflow.  COVIS was initially deployed for five years on the Ocean Network Canada’s NEPTUNE observatory and then recovered in summer 2015 (publications detailing NEPTUNE results are listed on the Acoustic Imaging site.  COVIS was subsequently refurbished for installation on the OOI Regional Cabled Array by Tim McGinnis, Aaron Marburg and others at APL-UW, in collaboration with science teams from Rutgers (Karen Bemis), Woods Hole Oceanographic Institution (Guangyu Xu – now at the UW), and Georgia Tech (Leonid Germanovich).

COVIS consists of a modified Reason 7125 SeaBat multibeam sonar mounted on a novel tri-axial rotator at the top of a 4.2-m tower. The electronics and data-handling hardware are contained in a pressure vessel near the base of the tower. The source and receiver transducers on COVIS operate at two frequencies: 400 and 200 kHz.

COVIS is an innovative sonar system designed specifically for long-term, quantitative monitoring of hydrothermal emissions. At 400 kHz, the system operates in the ‘Imaging’ and ‘Doppler’ modes to acquire water-column backscatter data for imaging focused hydrothermal venting and estimating the vertical velocity and fluxes, respectively.  Quantifying the extent, orientation, vertical variation in backscattering strength, and vertical velocities permit the estimation of volume and heat fluxes from the venting source and the mixing rate of the rising plumes with ocean water.  At 400 kHz, COVIS can also operate in a ‘Bathy’ mode to produce bathymetric maps within its imaging range.

At 200 kHz, COVIS operates in the ‘Diffuse’ mode to acquire acoustic backscatter from the seafloor covered by diffuse hydrothermal discharge (Figure 1). The output of the Diffuse mode enables the production of maps of discharging areas at regular time intervals (usually hourly) every day for as long as COVIS is installed.  By this means, COVIS detects changes in the spatial distributions and intensities of venting, including estimates of heat transport from more diffuse vents.  Estimations of fluxes (focused and diffuse) help discern the chemical and physical interactions between the ocean and underwater volcanoes (such as Axial Seamount), which globally have a significant impact on ocean chemistry and heat balance.  Another goal of this study is to detect how eruptions, seismicity, and seafloor deformation affect long-term hydrothermal venting.

COVIS was initially installed on the 2018 Regional Cabled Array maintenance cruise (VISIONS18) onboard the R/V Revelle (RR1812) on July 29, 2018.  The platform is located in the ASHES hydrothermal vent field about 8 m southeast of the actively venting Mushroom edifice imaged by the high definition camera (CamHD) and about 13 m east of the Inferno edifice.  COVIS ‘looks’ northwest and images at least a 128° sector centered on the 309° azimuth from COVIS.  Except for blank spots due to Mushroom’s and Inferno’s shadows, COVIS images from 5 m to 30-50 m, depending on the strength of the backscatter from the target.  COVIS produces 3D volumes of backscattering strength (Imaging and Doppler modes) and vertical velocity (Doppler mode), as well as 2D maps of seafloor backscatter variation (Diffuse mode).  See data site for timing of data runs and their modes.

COVIS has detected a series of hot spots around the northeastern sector of ASHES which can be interpreted as a combination of diffuse and focused discharge (Figure 2).  The area of the inferred diffuse discharge varies with the tidal cycle.  Plumes rise above the Inferno and Mushroom hydrothermal edifices (Figure 3), and site between them near the 3D Array.  The plume structure above Inferno varies significantly over every day.

Updated COVIS images and maps will soon be available at the COVIS team site, as well as the COVIS data ftp site run by OOI.

COVIS was installed in the ASHES hydrothermal field at Axial Seamount at a water depth of 1545 m. The instrument is connected to the medium powered junction box MJ03B. It consists of a multibeam sonar (RESON Seabat 7125) with 2 heads (200 kHz and 400 kHz) and control computer in pressure housing, 3 rotators, tripod, and a second pressure housing with control computer for rotators and data collection scheduling.

Raw and processed PI instrument data for COVIS can be accessed through the Access Data link above. Within the accessed ftp site, a read me text file provides information about data formats, calibration information, and instrument data. Post-processing code (in Matlab) is provided at: https://github.com/COVIS-Sonar/postprocessing. A detailed description of the COVIS data formats is available within that repository at: https://github.com/COVIS-Sonar/postprocessing/blob/master/Docs/CovisDataFormat.md.

Figure 1: A photo of COVIS taken after its installation in the ASHES hydrothermal vent field. The locations of sonar transducers and receiver along with the three components (pitch, roll, and yaw) of the tri-axial rotator are labeled. Credit: K. Bemis, Rutgers University. 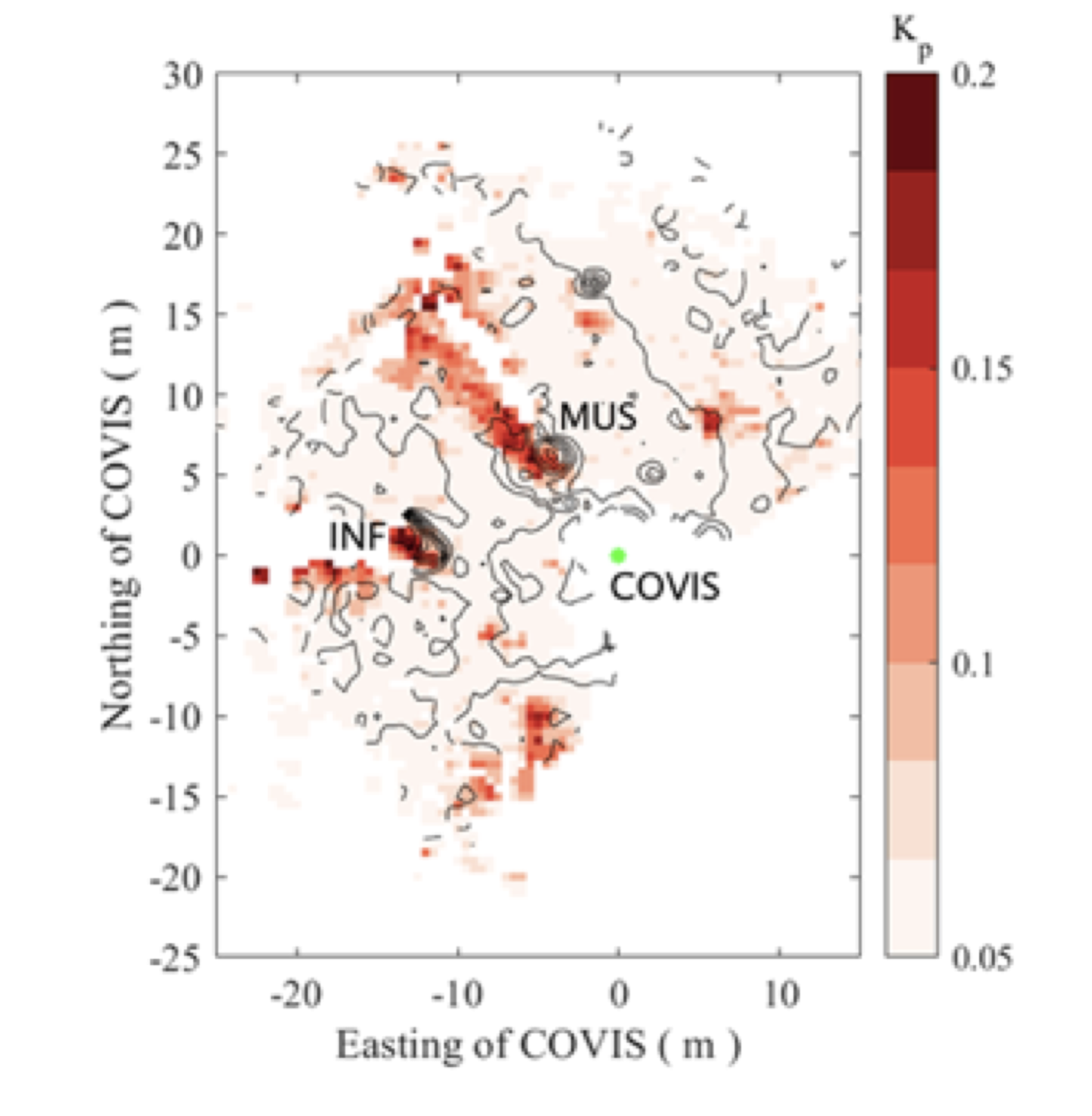 Figure 2: A composite map of normalized backscatter amplitude variance (Kp) generated from the Diffuse-mode data recorded on Aug 19th, 2018. This map is created by merging and interpolating a total of 36 sweeps recorded at the three nominal headings (305°, 240°, 20°) during the day onto the 2D grid using the weighted nearest-neighbor method. The black contours denote seafloor topography measured by COVIS (see Figure 1) in 0.5 m intervals. The locations of Inferno (INF) and Mushroom (MUS) vents are labeled and the green dot marks COVIS’s location (0, 0). 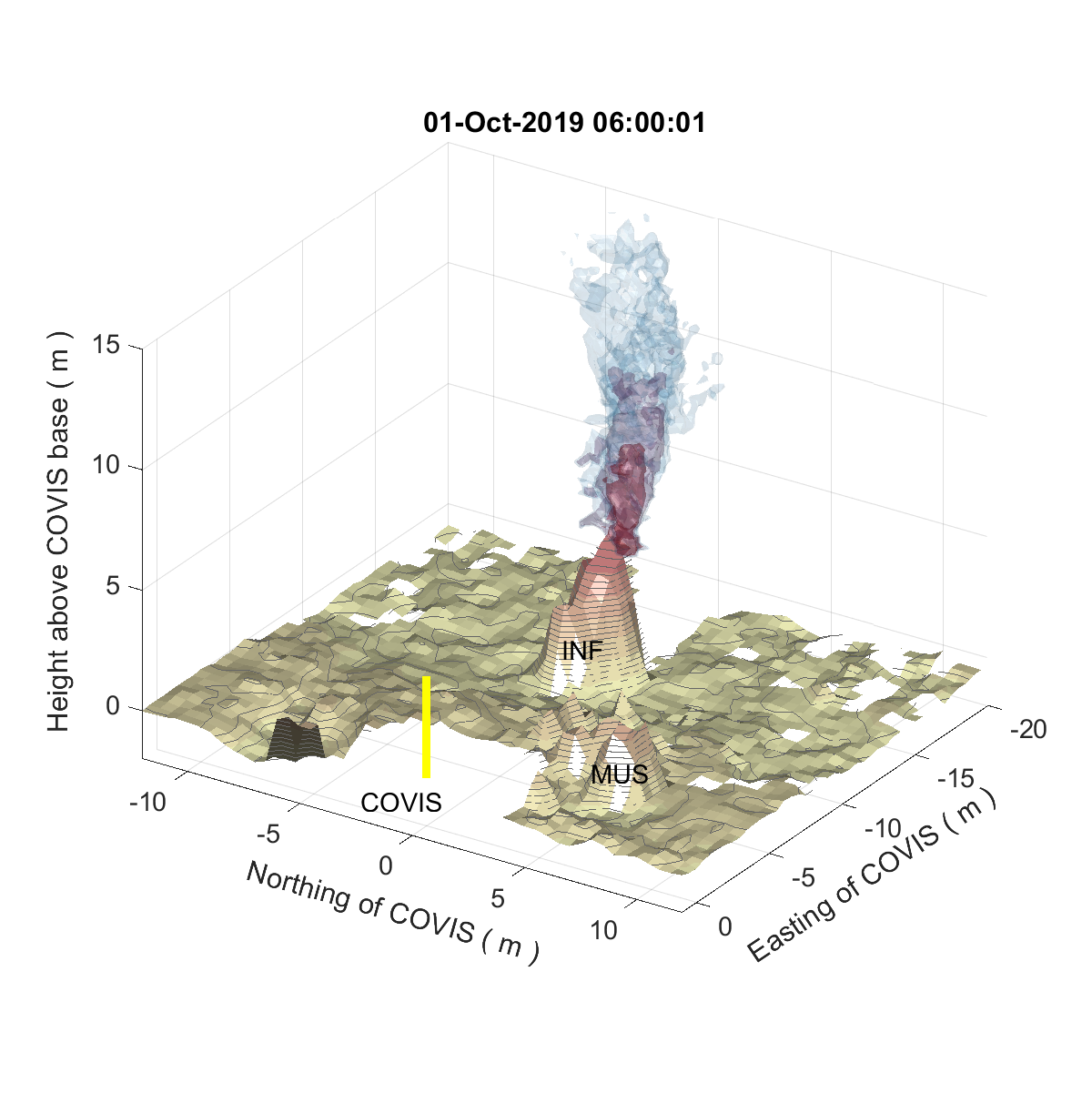 Figure 3: An acoustic image of focused hydrothermal flows generated from an Imaging-mode dataset record on Aug 2nd, 2019. The Inferno (INF) and Mushroom (MUS) vents are labeled, and the yellow bar denotes COVIS. The color contours correspond to three isosurfaces of backscatter intensity at -40 dB (red), -50 dB (magenta), and -60 dB (blue).