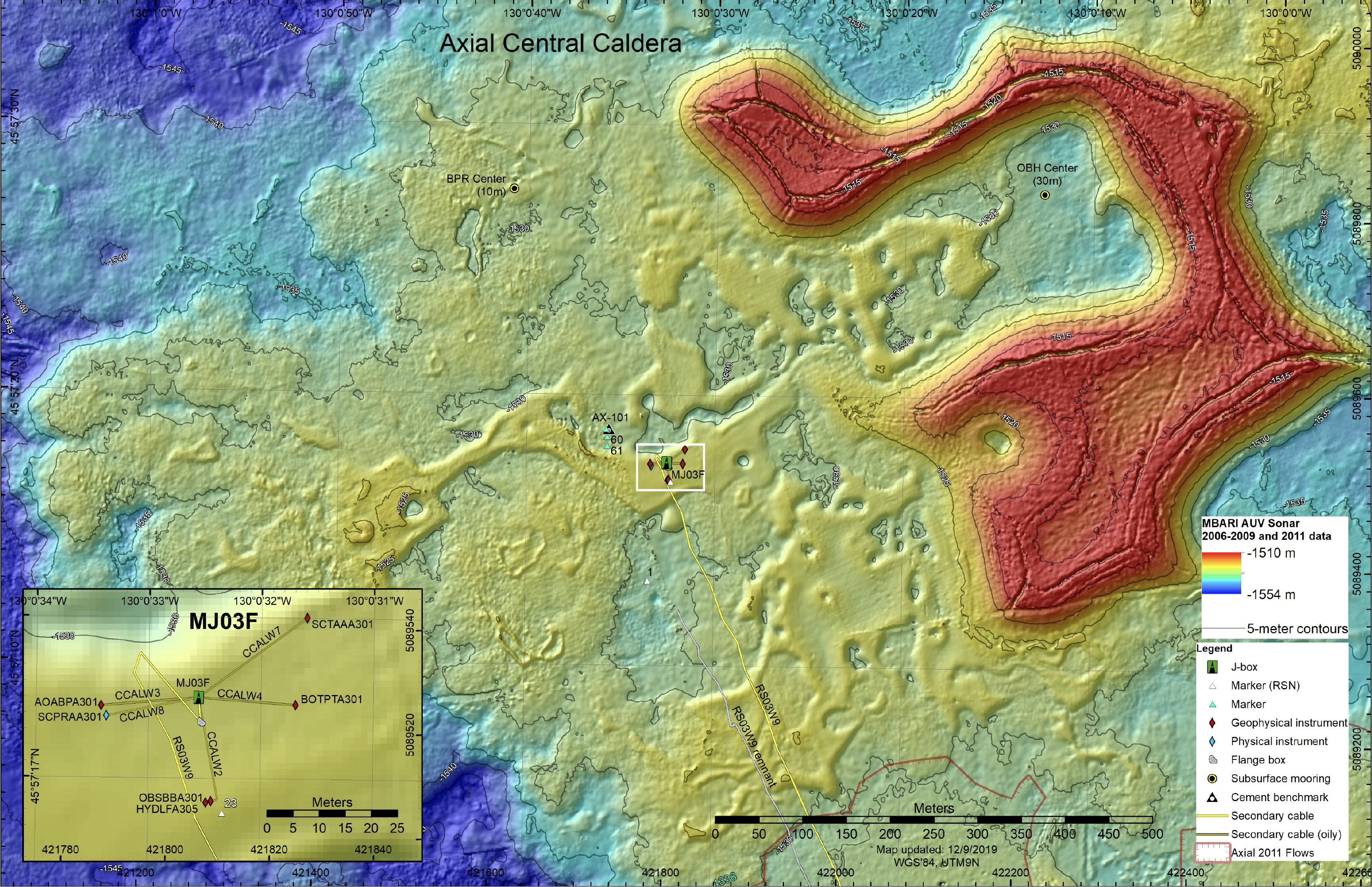 The Self Calibrating Pressure Recorder (SCPR) is located in the Central Caldera site at the summit of Axial Seamount. It is co-located with several OOI core and NSF-funded PI geophysical instruments. This map shows instruments as installed in 2020. Credit: M. Elend, University of Washington.

The Self Calibrating Pressure Recorder (SCPR) (Figure 1) was developed by Drs. Mark Zumberge and Glen Sasagawa at the Scripps Institution of Oceanography with funding through the NSF’s Office of Technology and Interdisciplinary Coordination (OTIC) and Marine Geology and Geophysics within the Oceanography Program  (Continuous and Drift Free Vertical Deformation Measurements at Axial Seamount – Installation of a Self Calibrating Pressure Recorder on the OOI Cabled Array). The instrument includes two redundant quartz pressure gauges that are periodically switched, using motor-driven valves, from the ocean pressure signal to a stable and reproducible reference pressure generated by a piston gauge on board the instrument. By applying the calibration reference pressure value, generated every few weeks, the drift in pressure signals (which can be 10-20 cm per year) can be estimated and removed to create a drift-free time series of seafloor height.The sensors are housed in a 42 cm diameter titanium sphere that is cabled to the medium power junction box MJ03F at the Central Caldera site on the summit of Axial Seamount.

This geodetic instrument is designed to measure seafloor deformation at Axial Seamount caused by build-up of melt and gases in the subsurface (inflation) and subsidence (deflation), which rapidly occurs during diking eruptive events. Axial is the largest and most active volcano along the Juan de Fuca Ridge, and erupted in 1998, 2011 and 2015; the 2015 eruption resulted in a ~127 m thick lava flow. Real-time monitoring of seafloor deformation at the summit of Axial, as well as knowledge of seafloor depth at the onset of the past three eruptions is allowing, for the first time, forecasting of when an underwater volcano will erupt.

The SCPR (SCPRAAA301) was installed on the 2018 Regional Cabled Array cruise on July 6. In 2020, the SCPR deployment was extended to 2024 through NSF Award 2021820 to Dr. Sasagawa (Continued Drift-Free Seafloor Pressure Observations at Axial Seamount – Capturing the Vertical Deformation Time Series of a Magmatic System). It is co-located with OOI Core instruments that include a broadband seismometer and low frequency hydrophone, and bottom pressure-tilt instrument. Central Caldera is a focused site for PI geophysical instruments – current instruments include a Flipping Tilt Meter [SCTAAA301: PI – Dr. William Wilcock) and an additional Self Calibrating Pressure Sensor (PI –  Dr. William Wilcock) known as the A-O-A instrument (AOABPA301). The SCPR is immediately adjacent to the A-O-A instrument (Figure 2).

The SPCR (SCPRAA301) was installed at the Central Caldera site at the summit of Axial Seamount at a water depth of 1535 m. The instrument houses a pressure sensor based on the Paroscientific instrument, as well as a temperature sensor. 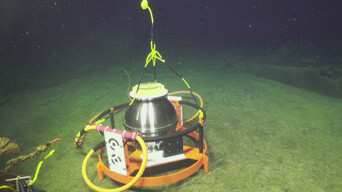 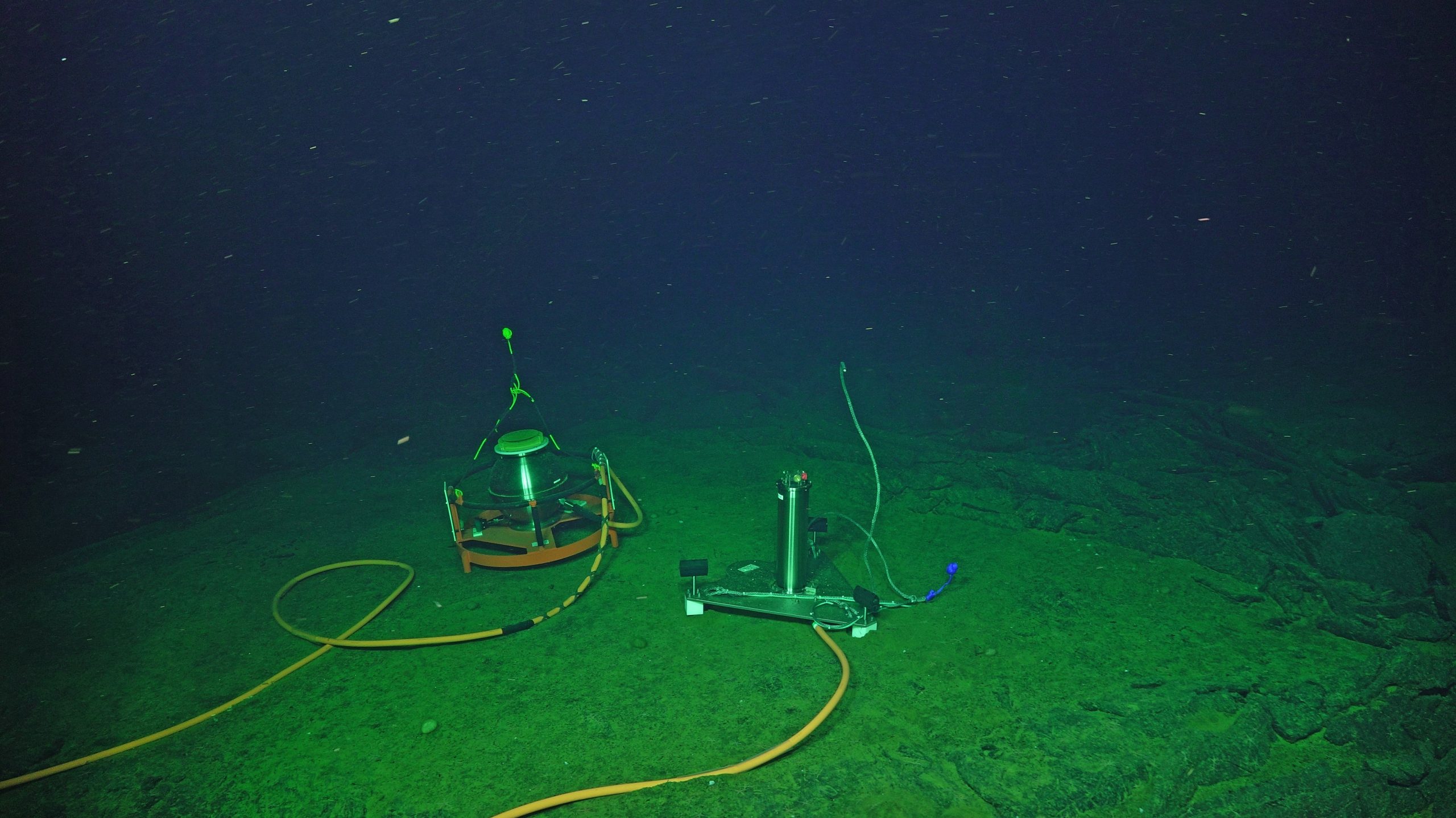 Figure 2. The SCPR instrument is co-located with an A-O-A instrument that compares ocean pressure to pressure within the instrument to extract drift. Credit: UW/NSF-OOI/WHOI; V19.