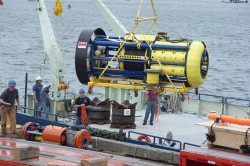 The Ocean Observatories Initiative (OOI) in April successfully recovered equipment deployed for at sea tests in the waters south of New England.

The equipment recovery cruise on the Research Vessel Knorr test took place April 10-15. All of the deployed equipment was successfully recovered and will continue to undergo post-deployment test and evaluation. Though based on decades of experience, the OOI mooring designs incorporate new features to advance ocean observing capabilities and testing allows the program to validate and improve the designs of the moorings to be used in the OOI.  The three moorings incorporate many of the design elements of the moorings to be used in the Coastal and Global Scale Nodes of the OOI and represent an important component of the program. The test deployment included engineering instrumentation to allow examination of mooring performance during the deployment, which spanned the winter of 2011-2012.

The Coastal and Global Scale Nodes component of the OOI is being developed and constructed by Woods Hole Oceanographic Institution, Oregon State University and Scripps Institution of Oceanography.

At the same time the team on board Knorr, which included participants from Woods Hole Oceanographic Institution, Scripps Institution of Oceanography, Oregon State University, and the National Science Foundation, gained valuable experience in recovering these new moorings. The project recovers all gear, including the anchors, when servicing the moorings on the continental shelf, and new deck gear was fielded on the cruise to make this possible.

Senior Scientist Dr. Robert Weller of Woods Hole Oceanographic Institution was the Chief Scientist for the cruise. He reported that “the cruise on the Knorr was a complete success, providing critical experience in working with the new mooring designs, recovering all the gear deployed in September to complete the field phase of the test of the prototype designs, and greatly improving the maps of the seafloor in the Pioneer Array Area.  The capabilities of the Knorr and her crew work excellent complements to skills of the science party on board and a major reason for the success of the cruise.”

The coastal component is comprised of two arrays: Endurance Array located in the Northeast Pacific and Pioneer Array off the mid-Atlantic coast. The global component includes four high latitude sites: Irminger Sea off Greenland, Argentine Basin off the coast of Argentina, Southern Ocean at 55 °S, 90°W, and Ocean Station Papa in the Gulf of Alaska.

The two shallow moorings were tests of the moorings to be deployed in the Pioneer Array component of the OOI and the third deep test mooring is designed to be used in the deep ocean global array part of the program. The Pioneer Array will contain: 10 moorings distributed among seven sites; three Autonomous Underwater Vehicles and six gliders. The region of the continental shelf where the Pioneer Array will be deployed is characterized by sharp gradients in ocean temperature and other properties across the shelf, currents that flow along the shelf, and strong biological productivity.  The data collected from the Pioneer Array will be freely available to all, including researchers seeking to improve understanding of the region.  The coastal mooring designs will also be used in the Endurance Array.  The global arrays will be deployed in the data sparse high latitude oceans where there is much to be learned from sustained ocean observing.

Click on the following links to view video clips of this event:

Click here for more on the Initial Deployment of At Sea Test-2 Equipment and here to view detailed Pioneer Array Instrument Tables.

Please click here to Submit Comments or Question for the OOI Program or submit at: https://ooi-website.whoi.edu/questions/