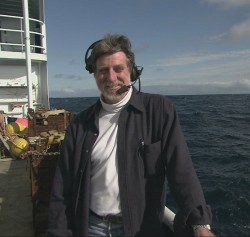 John R. Delaney, Director and Principal Investigator of the Ocean Observatories Initiative (OOI) Regional Scale Nodes (RSN) and Professor of Oceanography at the University of Washington had the opportunity to share his thoughts on exploring the Earth’s oceans during a recent event at San Francisco’s Exploratorium.

The Sept. 13 event came soon after the OOI RSN Team recently completed a major construction milestone with installation of the primary nodes of the cabled component of the OOI infrastructure in the Northeast Pacific Ocean.  The RSN will be the first United States regional cabled observatory.  The infrastructure is designed to operate continuously for 25 years and is scheduled to be operational in 2014.

The Exploratorium has presented a series focused on NASA’s Mars Curiosity rover and research recently and the exchange with Delaney allowed for a comparison between exploring the oceans and distant planets.  Delaney was able to share information on the OOI and the goals of the program with a wide audience.

A webcast of this special event can be viewed here: http://www.exploratorium.edu/mars/?goback=.gde_1418097_member_163698149.  And click here for more information on the OOI Primary Node Installation Activities.