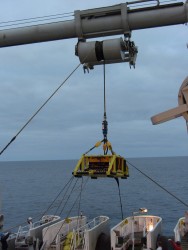 (Click to enlarge) The Ocean Observatories Initiaive (OOI) Regional Scale Nodes (RSN) Primary Node 3B was launched from the aft deck of the cable installation ship the TE SubCom Dependable on Aug. 18, marking deployment of the seventh, and final, node installation on the OOI RSN cabled infrastructure.

The Ocean Observatories Initiative (OOI) program’s Regional Scale Nodes (RSN) team completed a significant construction milestone in August with installation of the primary nodes for the cabled component of the OOI infrastructure in the Northeast Pacific Ocean.

The primary nodes are seven main connection points on the network that provide for power and communications.  The OOI regional cabled observatory, located in the northeast Pacific Ocean, will establish an interactive network of ocean observing sensors, instruments, and moorings connected by a total of 900 kilometers (~ 560 miles) of electro-optical cable.  The OOI team began installing the first node on July 9 and completed work on August 18 when Primary Node 3B, the final of seven nodes, was deployed from the aft deck of the cable ship, TE SubCom’s Dependable.

“Once the infrastructure now in place has been tested and accepted, it will provide the backbone for the transformational capabilities offered by this network of 850 km of primary cable carrying abundant power and two-way high-bandwidth connectivity to instruments that will be installed throughout the ocean and on the seafloor,” said John R. Delaney, Director and Principal Investigator of the OOI Regional Scale Nodes and Professor of Oceanography at the University of Washington. “At just past the halfway point of the 66-month construction program and with the backbone infrastructure deployed, we are now preparing to bring to fruition the full capabilities of real-time, interactive, long-term ocean science and education in the Northeast Pacific Ocean.”

The RSN cables extend to two main study sites: Hydrate Ridge, located at the base of the Oregon continental margin approximately 120 kilometers (~75 miles) southwest of Pacific City, Oregon, and Axial Seamount, located 500 kilometers (~ 310 miles) west on the Juan de Fuca Ridge. The RSN cables also will serve the cabled moorings of the OOI’s Coastal Scale Nodes Oregon Line at the Endurance Array site.  Two primary nodes are installed at Hydrate Ridge, two at Axial Seamount, two on the Endurance Line, and one in the middle of the Juan de Fuca plate, a placeholder with minimal internal electronics that will be available for future network expansion.

Once connected to the cable, each primary node installed will provide two-way communication between land and sea and will supply instrument arrays with up to 10 gigabits per second of communications bandwidth and 8 kilowatts of power.  Data will be collected by instruments from the sea surface to the seafloor, transmitted by cable, and publicly available onshore in near-real time via the Internet.

The RSN will be the first United States regional cabled observatory.  The infrastructure is designed to operate continuously for 25 years and is scheduled to be operational in 2014. The next step in the Northeast Pacific, scheduled for summer 2013, is to install the network’s secondary infrastructure: extension cables, lower-voltage nodes, instruments, sensors, gliders, and moorings, Delaney noted.

“This secondary infrastructure work may be regarded as adding finely tuned senses and motor skills to the already powerful backbone infrastructure,” Delaney said. “Completing the network will set the stage for a dramatic projection of human activities into the ocean and will provide a setting for next-generation technologies developed in other fields to be used in the oceans. “

The OOI, a National Science Foundation-funded program, is managed and coordinated by the OOI Program Management Office at the Consortium for Ocean Leadership in Washington, D.C. The University of Washington (UW) is leading the design and construction of the OOI RSN cabled component. The primary node installation team includes personnel from the OOI program at UW and Ocean Leadership, primary infrastructure contractor L-3 MariPro, subcontractor TE SubCom and the Oregon Fishermen’s Cable Committee. Two protected species visual observers also were onboard the installation vessel, the TE Subcom Dependable.