The Ocean Observatories Initiative (OOI) program’s Regional Scale Nodes (RSN) team completed a significant construction milestone in August with installation of the primary nodes for the cabled component of the OOI infrastructure in the Northeast Pacific Ocean.

Click here to read the full story of the primary node installation and more details about instruments that will be used in the RSN network.

(Click to enlarge) In the summer of 2011, the OOI RSN program laid 850-km of primary cable segments for the first U.S. regional cabled ocean observatory. In July 2011, the shore ends of the two lines that run west from the coast of Oregon were pulled ashore through conduits drilled earlier that year in Pacific City, Oregon.  Credit: OOI RSN and CEV, University of Washington; photo courtesy of TE SubCom

(Click to enlarge) Seven OOI RSN primary nodes were installed in July and August 2012. Connecting the nodes to the cable segments involved a delicate ballet of cable retrieval from the seafloor, testing, cutting and on-deck splicing. Once a node was successfully spliced into the cable segments and thoroughly tested, it was deployed from the ship to its intended target location on the seafloor using computerized positioning calculations. Shallow water nodes (PN 1B, 1C, and 1D) have trawl-resistant frames to prevent fishing gear entanglements. Credit: OOI RSN and CEV, University of Washington; node drawings courtesy of L-3 MariPro. 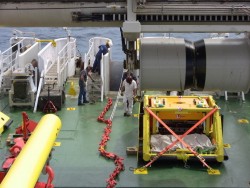 (Click to enlarge) The grapnel (red “chain” of hooks), which was used to grapple and recover the ends of cable segments, is shown here lying on the fantail of the TE SubCom CS Dependable, with one of the deep-water Primary Nodes to the right. The OOI RSN team, including contractor L-3 MariPro, worked for several months to evaluate a number of installation scenarios to ensure successful deployments and node placements.
Photo by Cecile Durand 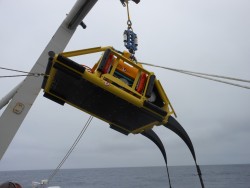 (Click to enlarge) Node PN1A—the first node to be installed—shown here being launched from the back deck of the TE SubCom CS Dependable. Note the  black cable tails that curve down from the node on the right-hand side of the photo. The two ends of cable segments are spliced into the node at these tails. PN1A was deployed in deep water (2900 meters) and does not have a trawl-resistant frame.
Photo courtesy of L3-MariPro 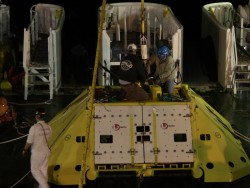 (Click to enlarge) Node installation operations went on around the clock. Shown here is Primary Node 1B (PN1B) being readied for a nighttime deployment. Operations for deployment of this node began late in the evening of July 19. Just before midnight it was confirmed that the node had landed on the seabed at about 1,250m water depth and only 20m away from its target location. Photo by Cecile Durand 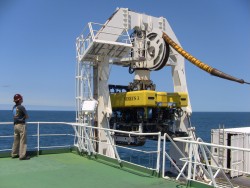 (Click to enlarge) The remotely operated vehicle (ROV) Nereus 3, which was carried onboard the TE Subcom CS Dependable during the primary node installation cruise, was sent down to at the location of the shallow water nodes. As with each installation, tests were performed once the node was on the seafloor to confirm that cables and nodes were functioning as expected. For the shallow water nodes, the ROV was used to bury the cable segments connected to the nodes. Burial operations could take up to 4 or 5 days to complete. Photo by Cecile Durand 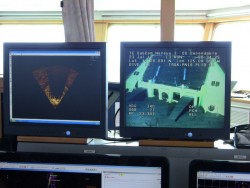 (Click to enlarge) Screen monitors on the bridge of the TE SubCom CS Dependable show sonar and video displays from the ROV Nereus 3 during final inspection of node PN1B. Note the node sitting nice and flat on the seabed in video display. Photo by Cecile Durand 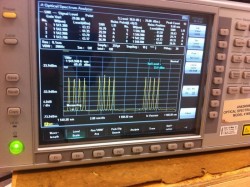 (Click to enlarge) OOI RSN and L-3 MariPro personnel at the shore station in Pacific City, Oregon, were actively involved in primary node installation operations. They monitored activities as the system was powered on and off during ship-based tests and deployments. Shown here is the screen of an Optical Spectrum Analyzer (OSA) at the shore station. The twelve peaks shown are actually the twelve wavelengths coming from the three RSN Primary Nodes connected at the time–PN1A, PN1B, and PN1C. Each Node has two traffic wavelengths of 10gb/s each and two wavelengths for system management. Photo by Pete Barletto 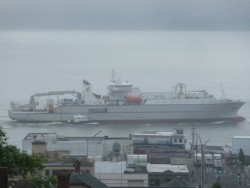 (Click to enlarge) The OOI RSN Primary Node Installation operations had a mid-cruise port call in Portland, Oregon, for resupply and crew changes. Shown here is the TE SubCom CS Dependable passing by Astoria, Oregon, on August 2, 2012. The smaller vessel alongside is the pilot boat, Connor Foss, which transferred the Columbia River Pilot to and from the ship. Photo Courtesy of Scott McMullen, Oregon Fishermen’s Cable Committee (OFCC)

(Click to enlarge) OOI RSN Primary Node installation operations were completed as scheduled on August 18, 2012, when PN3B landed at 0858h PDT. Touchdown was at a depth of 1520 meters and landing was approximately 26 meters west of the target position. PN3B is the westernmost node on the northern line of the OOI RSN cabled infrastructure, and is located in the crater of Axial Seamount some 320 km offshore. This graphic shows the relationship between the Primary Nodes on the OOI RSN system and the yet-to-be-installed secondary infrastructure of ROV-laid cables, local sensor networks, moorings, and profilers. Secondary infrastructure installation is scheduled to begin in 2013.  Credit: OOI RSN and CEV, University of Washington