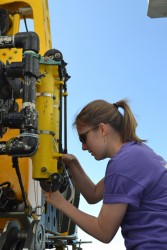 A University of Washington team of engineers, scientists, and students concluded the VISIONS ’13 expedition in late August after successful completion of critical at-sea construction and testing of the cabled observatory component of the Ocean Observatories Initiative (OOI) program.

The primary focus of the 47-day cruise onboard the R/V Thompson and using the remotely operated vehicle (ROV) ROPOS, was to install and test secondary infrastructure: extension cables, secondary nodes (junction boxes), and instruments at OOI cabled component study sites in the northeast Pacific Ocean. This work formed an important foundation for 2014 installations that will include more cables, secondary nodes, and instruments, as well as six moored profilers.

When the system is fully operational in early 2015, each study site will be provided with real-time, two-way, high-bandwidth communication and power through 540 miles of primary electro-optical telecommunications cable connected to the shore station in Pacific City, Oregon. The primary cable was installed in 2011; seven primary nodes (high-voltage and communication junction boxes) were installed, connected and powered up in 2012; and a total of 35 miles of secondary extension cables with 13.7 miles installed in 2013 and the rest to be installed in 2014.

During VISIONS ‘13, which took place in July and August, the UW and ROPOS team successfully deployed, tested, and verified the function of the 13.7 miles of electrical and electrical-optical extension cables. Four subnets, which included medium-power junction boxes, short-period seismometers, pressure sensors, and a high-definition video camera, were installed and fully tested. All are now on the seafloor, functional, and ready to be plugged in to the primary cable. Twenty undergraduate and graduate students participated on the cruise, working side by side with engineers, scientists, and the ROV ROPOS team, as well as conducting their own projects. Click here to see a more detailed summary of accomplishments. 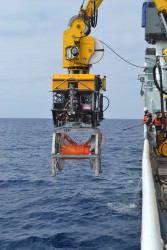 (Click to enlarge) ROV ROPOS is launched with the remotely operated cable laying system carrying a reel of RSN secondary infrastructure cable ready to be installed in the caldera of Axial Seamount. (Photo by Mitchell Elend, University of Washington)

According to VISIONS ’13 Chief Scientist John Delaney, who is also Director and PI of the OOI cabled observatory project, “It was tremendously exciting to see decades of planning come to fruition. We now have primary and secondary infrastructure on the seafloor. What we learned during VISIONS ’13 will significantly enhance our productivity next year as we complete the regional cabled system. Our team developed new skill sets installing and working with heavy equipment on the seafloor in order to lay cables and place instruments very precisely.” A high-bandwidth satellite connection enabled real-time collaboration between ship-based and onshore scientists and engineers.

Because the OOI team was still working with primary contractor L-3 toward acceptance of the primary infrastructure at the time of the expedition, power and communications for tests were provided by ROV ROPOS. Several hours of data were collected during each test period. One of the highlights included the streaming of live stunning high-definition video imagery from a seafloor OOI camera installed in the ASHES hydrothermal vent field in the caldera of Axial Seamount.

According to VISIONS ’13 Co-Chief Scientist and OOI cabled component Associate Director for Science, Deborah Kelley: “Connecting the OOI HD video camera for the first time and streaming the video live over the Internet was an amazing feat and highlights the significant science and education opportunities that this infrastructure will bring.”

Another expedition highlight was capturing an earthquake signal within the first hour of data collection from a subnet that included two short-period seismometers in Axial’s caldera. Analysis revealed this was an earthquake in the caldera itself. Later in the cruise, while working at the Southern Hydrate Ridge study site, the HD video camera on ROPOS provided another highlight: imagery of profound geological, biological and plume changes with large, recent collapse zones, changes in the presence/absence of biological communities, and very intense bubble plumes emanating from the seafloor.

The OOI regional cabled observatory, often referred to as the OOI’s Regional Scales Node (RSN), is the first United States regional cabled observatory. In summer 2012 the UW-led team installed the primary nodes for the OOI cabled component. Those “primary nodes” are seven main connection points on the network that distribute power and communications. The OOI team began installing the first primary node on July 9, 2012, and completed that work on August 18, 2012. Click here to read a full story and see maps of the Primary Node Installation.

(Click to enlarge) The OOI-RSN high-definition video camera is installed and tested. The camera was left in place, at the base of the “Mushroom” hydrothermal vent in the caldera of Axial Seamount, and is ready to be plugged in to the cabled network. (Photo credit: NSF-OOI/UW/CSSF)

Each primary node within the cabled system provides two-way communication between land and sea and supplies instrument arrays with up to 10 gigabits per second of communications bandwidth and 8 kilowatts of power.  Data will be collected by 31 different types of seafloor and water sensors distributed from the sea surface to the seafloor, transmitted by cable, and made publicly available onshore in near-real time via the Internet.

The primary nodes and cables serve five main study sites: 1) Slope Base, at the base of the continental slope some 125 km east of Newport OR, at a water depth of 2900 m. This site is highly influenced by the California Current and is at the base of the Cascadia Subduction Zone; 2) methane seep and underlying gas hydrate sites at Southern Hydrate Ridge; 3) the Endurance Offshore 600-m deep site, which is shared with the Oregon State University-led OOI Endurance Coastal Array and is located east of Hydrate Ridge. In 2014, RSN and Endurance Offshore sites will host an array of cabled and uncabled moorings to monitor processes that include hypoxia and ocean acidification; and 4-5) two sites at Axial Seamount, which is the most magmatically active volcano on the Juan de Fuca spreading center, and is located > 400 km off shore. Axial hosts numerous hydrothermal vent sites. Open ocean currents at this site are impacted by El Niño events and the Pacific Decadal Oscillation and will be studied by two cabled moorings at the base of Axial Seamount.

The OOI, a National Science Foundation-funded program, is managed and coordinated by the OOI Program Management Office at the Consortium for Ocean Leadership in Washington, D.C. Please continue to visit the OOI Website  and the UW Interactive Oceans Website for updates on the regional cabled observatory and other status reports on the OOI. 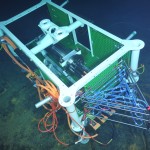 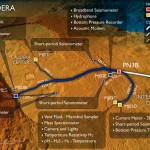 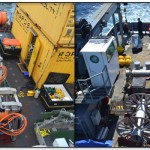