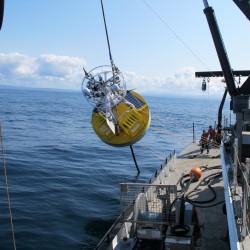 On April 2nd, the R/V Oceanus left port in Newport, OR to continue installations of the OOI’s coastal Endurance Array as well as complete the array’s first Operations and Maintenance (O&M) cruise.

Over the next 10 days, the Oregon State University OOI team installed coastal surface moorings and gliders as well as completed the first O&M “turn” (recovery & redeployment) of moorings installed in October 2014 along the Oregon and Washington lines.

“To me,” reflects Ed Dever, OOI Endurance Array Project Manager, “an overarching purpose of the Endurance Array is to enable better study of the long term physical, chemical and ecosystem changes in our coastal oceans that occur due to global climate change. It’s incredibly important, and with this deployment the Endurance Array is poised to contribute. Our success was made possible not just by the comprehensive preparation of our team and the superb support from the captain and crew of R/V Oceanus, but by the skills and dedication of engineers, technicians, ocean scientists, and managers over the last 5 years from across OOI including Woods Hole Oceanographic Institution, Raytheon Company, and the Consortium for Ocean Leadership.”

Deployments continue at the coastal Pioneer Array off the coast of New England from the R/V Atlantis. 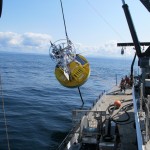 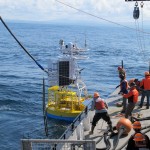 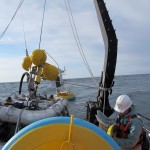 (Click to enlarge) The Washington Shelf surface mooring trails the R/V Oceanus as the instrumented multifunction node (MFN) on the fantail is prepared to be lowered through the A-frame. Mate intern Sonia Brugger stows a cargo strap removed from the MFN. (Photo Credit: OOI Endurance Array Program, OSU) 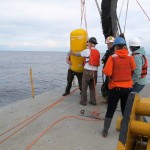 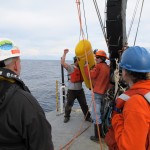 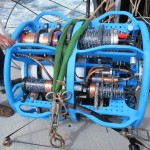 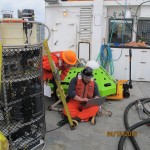