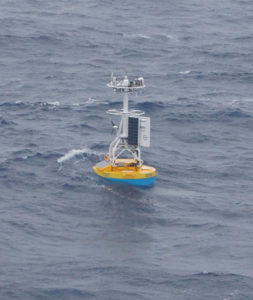 In February 2015, the Ocean Observatories Initiative (OOI) dropped anchor at 55oS and made history with the deployment of the most southerly surface mooring established as a sustained ocean observing platform.

The OOI Global Southern Ocean Array is one of four sites in the OOI focusing on the critical, yet under-sampled, high-latitude regions of the Pacific and Atlantic.  One of the primary scientific objectives of deploying this array was to provide key data to a very sparsely sampled area to better help modelers and forecasters understand the dynamic and volatile environment of the Southern Ocean.

As of August 9, 2017, data from the Surface Mooring of the Southern Ocean Array was integrated into the World Meteorological Organization’s (WMO) Global Telecommunication System (GTS) via the National Data Buoy Center (NDBC) making these data more easily accessible for weather forecasters and modelers.

These data are contributing to an international effort to improve environmental prediction for the polar regions and beyond known as the Year of Polar Prediction that runs from mid-2017 to mid-2019 and is organized by the WMO.

In just the few weeks since its integration into the GTS, these data have been tagged as having a big forecast impact by the European Centre for Medium-Range Weather Forecasts (ECMWF).

On August 19, 2017, the Surface Buoy picked up a low pressure system moving through the area.  By integrating these data into their forecast models, researchers were able to fill in some key spatial gaps in their observational coverage and overall reduce their 24-hr forecast error.  With errors reduced in their forecast model, ECMWF was then better able to forecast the next huge Southern Ocean storm with a central pressure around 955 mb that had simultaneous major impacts on southern South America, Drake Passage, and the Antarctic Peninsula.

In addition to its surface buoy, the OOI Southern Ocean Array includes a network of moorings that support sensors for measurement of air-sea fluxes of heat, moisture and momentum; physical, biological and chemical properties throughout the water column.  A full list of instrumentation on the Array is posted on the OOI website and data can be downloaded from the OOI Data Portal, as well as accessed through the GTS.