Haley Cabaniss did not realize she could follow a career path in ocean sciences until she moved to Illinois in the “Heartland of America” to begin her PhD.

During undergraduate at the College of Charleston in South Carolina, Cabaniss had split passions – large scale plate tectonics and volcanology. She even stayed an extra year to conduct a second undergraduate thesis project so that she could focus on both areas. Her first project examined the breakup of Pangea using GeoMap App data. “At the time I don’t think I realized that I was using ocean data,” says Cabaniss.

For her second project, Cabaniss worked at the Center of Exchange and Research in Volcanology in Colima, Mexico. While in Mexico, Cabaniss worked with a team to study the relationship between sulfur dioxide gas emitted from the volcano into the air and sulfur concentration in the volcanic melt, i.e. that which is erupted from the terrestrial volcano and preserved in rock. Volcanic gas emissions after all are a key element in figuring out if an eruption is likely to occur. So, finding this link could be a key to enable developing countries to cheaply forecast when a volcano could erupt by taking gas samples rather than the rocks.

When she brought back her volcanic rock samples from Mexico, Cabaniss needed to analyze them using specialized instrumentation. This instrumentation could be found at the Woods Hole Oceanographic Institution (WHOI). “It is ironic,” says Cabaniss, “that what brought me to WHOI the first time was to use their instruments to look at terrestrial samples.”

Going into graduate school, Cabaniss wanted to figure out a way to combine her passions. “I have been afraid of commitment in science because people get pigeon holed into very specific topics and I never wanted to do that,” says Cabaniss. “I came to graduate school without a project and said – hey I am interested in these two things – plate tectonics and volcanoes.”

Almost immediately upon beginning her PhD program at the University of Illinois at Urbana-Champaign Cabaniss found herself on a ship. Cabaniss took part in the 2016 Off-Axis Seamount Investigations at Siqueiros (OASIS) cruise to the eastern Pacific Ocean to study the 8’20N seamount chain off the East Pacific Rise with her advisor Dr. Patricia Gregg. The goal of the cruise was to fill in gaps of our knowledge about mantle melting, melt migration, and lithospheric evolution. The 31 days at sea included 15 Alvin dives and 12 AUV Sentry Dives, as well as extensive dredging operations. The cruise also helped to solidify for Cabaniss that oceanography was indeed the route she wanted to take – “I totally fell in love with oceanography and sea going science.”

It seems ironic to have moved 800 miles inland from her coastal college to have begun her oceanography career, but not to Cabaniss. “There are actually quite a few people who do ocean science in land-locked places,” says Cabaniss. And she is also quick to point out that “we may not have oceans here, but we don’t have volcanoes either and that doesn’t stop people from researching them.”

Not only is the ocean accessible to Cabaniss because she has an ocean-going advisor, but also because she has access to the OOI. “The thing that makes oceanography accessible in Illinois and any place inland,” says Cabaniss, “is that we have these awesome datasets like the OOI. Anyone anywhere in the world can go online, grab these datasets and start playing with them.”

Not only does Cabaniss utilize the OOI, her Ph.D. work is funded by a grant awarded to her advisor by the National Science Foundation (NSF) to work with the OOI Cabled Axial Seamount Array datasets. A huge draw to conduct this work at the University of Illinois is access to the National Center for Supercomputing Applications (NCSA). The NCSA, located at the university, provides time and resources for Cabaniss and her colleagues to develop their high tech modeling approaches on supercomputers.

Using the data from Axial Seamount, Cabaniss has been able to merge together her two passions to use OOI data to explore processes that trigger volcanic eruptions in an effort to ultimately create a real-time volcano forecasting model. To create a real time model, you need to utilize a forecasting technique that is able to update itself with the real time data it receives. A good example of this type of model is Google maps where the route on the map must adjust in real time to take into account changes, e.g. traffic, road closures, the speed of your car. To fill this need, Cabaniss is utilizing the Ensemble Kalman filter (EnKf), a statistical data assimilation approach.

The EnKF approach has only recently been adapted for to volcano applications and will not only help to improve our understanding of how volcanos work, but hopefully one day help to mitigate potential hazards for those living on or near active systems. And as Cabaniss notes regarding her volcano research, “Everyone is on board for saving lives.” Perhaps the harder sell in Cabaniss’ research is why do we care about a tiny volcano off the coast of Oregon whose eruptions have no impact on human life or property? “The answer is that the Axial Volcano is uniquely positioned through the OOI to help us answer some of these big volcanic questions,” says Cabaniss. “Once we understand this system maybe we can apply what we have learned to larger terrestrial volcanos that do impact people.”

Cabaniss and her colleagues are using OOI BOTPT data and the 30 year New Millenium Observatory (NeMO) dataset to hindcast previously recorded  eruptions at Axial. They hope to better understand what triggered the past eruptions and use their forecasting technique and real-time data coming in from the OOI to create a volcano forecasting model. They are optimistic that once they build a the model and tune it to past eruptions they can then incorporate other real time data from the Cabled Array to enhance their model, like adding in seismicity data. “The beauty of the approach is that you can build in data of any type or time scale into it,” says Cabaniss, “the technique has great potential.”

Cabaniss is entering her 4th year of her PhD program and beginning to think about her future career. “I plan to always be an OOI user and a user of these data sets available online to anyone,” says Cabaniss. “There is so much you can gain from open source huge datasets that are free.”

In terms of her next steps, Cabaniss is interested in education. She is certainly in a unique position, amongst fields of corn, to realize just how much the OOI can mean to students and teachers away from the coast to connect with the ocean and use ocean data. “You can have kids in any classroom learning about an oceanographic process go online and look at real data instead of just reading from text books or looking at a powerpoint.”

Judging from what we know from Cabaniss’ journey, it is unclear if even her EnKf model could predict where her path may lead next – Greenland to begin tropical research? – but one thing is clear, she will continue to try and solve these puzzles of tectonics, volcanos, and the seafloor and follow her passion wherever it leads. 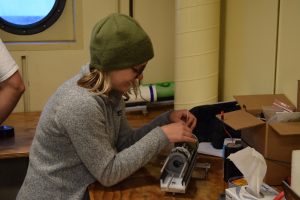 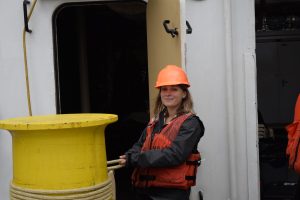 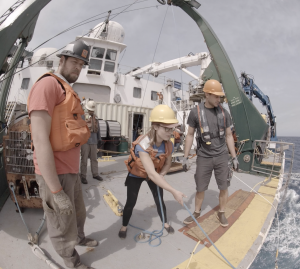 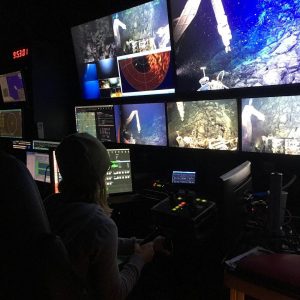 Operating the manipulator arm of the R/V Jason from the control van on the ship as the ROV works on the seafloor. Photo Credit: Haley Cabaniss 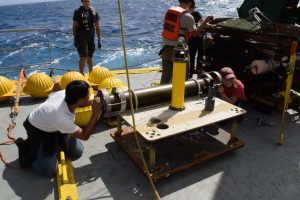 Making “calls” from the hydrophone onboard. Photo Credit: Haley Cabaniss 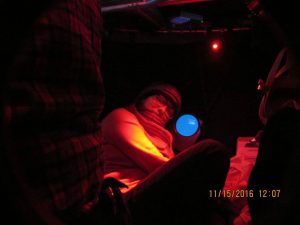 Inside Alvin on the OASIS Cruise. Photo Credit: Haley Cabaniss 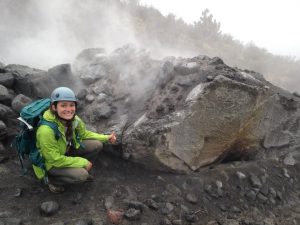