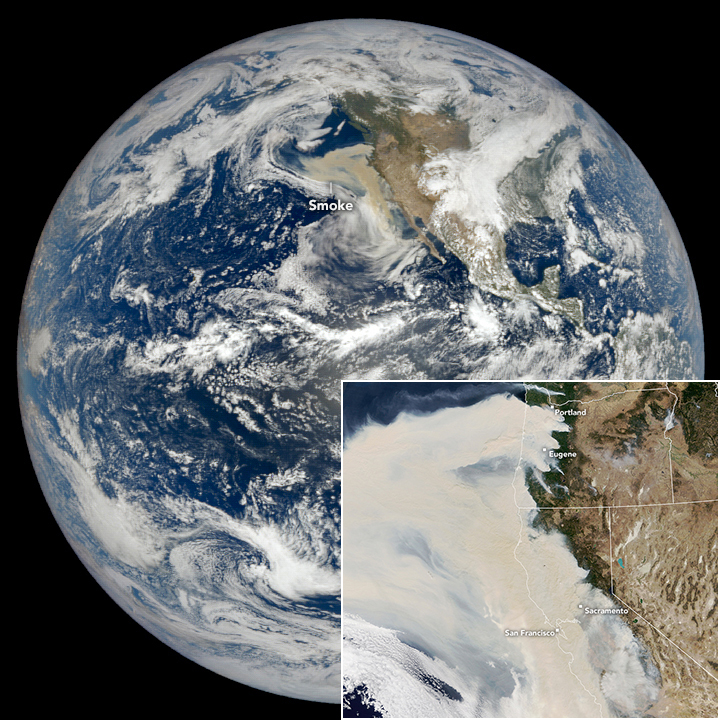 Figure 1. A wall of smoke on the U.S. West Coast as seen from a NASA satellite. Credit: NASA

On September 8th 2020, wildfires spread quickly across western Oregon causing tremendous damage and shrouding the region with smoke for more than a week.  Smoke from these fires, driven by an extreme Santa Ana-type easterly wind event, could be seen from satellites (figure 1). The smoky air moved directly across the path of the Coastal Endurance Array. A data view of this phenomenon is available here. 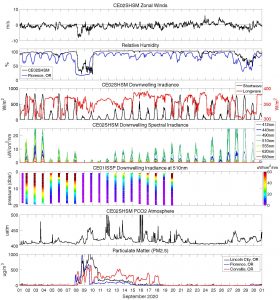 Beginning on the 8th, strong, dry offshore winds blew past the Oregon Shelf Surface Mooring (CE02SHSM) 10 nautical miles west of Newport, which measured the lowest relative humidity values (<18%) since it was first deployed in April 2015 (panels a & b). These winds were followed by a week of reduced sunlight (panel c). Six meters below the surface, sunlight was reduced by the red smoke more in some colors than in others (panel d). Closer to shore at the Oregon Inshore site, light levels were measured throughout the water column by an OOI coastal surface piercing profiler (panel e). The smoky air had relatively high concentrations of carbon dioxide (panel f). Other Coastal Endurance Array sensors, such as bioacoustic sonars, also may have measured additional effects from these fires.

At the coast, the smokiest air cleared after a few days, although air particulates were elevated for more than a week (panel g). During the worst of the smoke, the iconic bridge over Yaquina Bay in Newport was hardly visible (figure 2). In Corvallis, 100 km inland and in the center of the Willamette Valley, unhealthy air blanketed the town for 10 days.  These measurements are but one example of the type and quality of data being continuously collected by the Coastal Endurance Array. 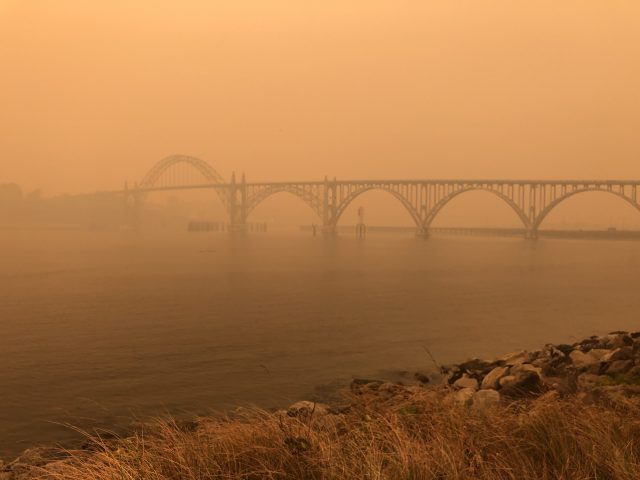 This article was written by Craig Risien and Jonathan Fram of the Coastal Endurance Array team.