A team of ten scientists and engineers will depart aboard the R/V Sikuliaq in late March for a two-week expedition to recover and redeploy ocean observing equipment at the Coastal Endurance Array. Located in the northeast Pacific off the coasts of Oregon and Washington, the Coastal Endurance Array consists of two cross-shelf moored array lines, designed to observe cross-shelf and along-shelf variability in the region.

The team will recover and deploy seven moorings. Four of the moorings are located on the Washington Shelf, with the remaining three on the Oregon Shelf. The team also will be recovering a surface piercing profiler at the Washington Shelf site and deploying four surface piercing profilers on the Washington and Oregon lines. Another goal of the team is to deploy and recover gliders so that five are in the water and continue to sample and report back data over the next three months. The gliders collect data across the shelf in shallow water down to 200 meters and also collect data offshore down to depths of 1000 meters. 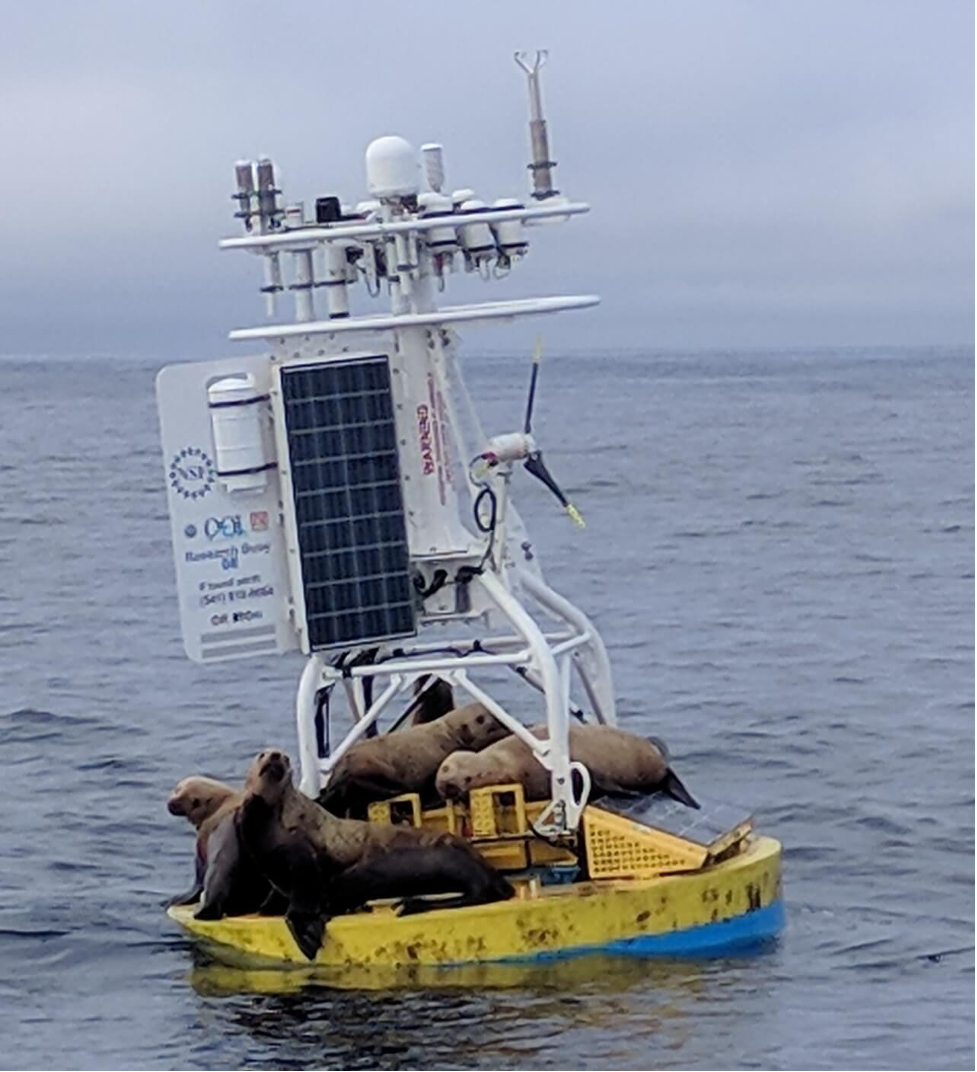 The Endurance Array team has to contend with occasional visits of sea lions, which can weigh up to 1000 pounds, and who like to explore the components of the array. This expedition will be testing a re-enforce solar platform to see if can better bear the weight of these hefty and curious visitors. Credit: Endurance Array team.

When not recovering and deployment equipment, members of the onboard team will be taking CTD (connectivity, temperature, and depth) casts to verify and calibrate instrumentation. Because of the quantity of the equipment to be recovered and deployed, the cruise will take place in two separate legs.

Measurements collected by this array capture the variability of ocean properties across a broad range of temporal and spatial scales. Scientists are using these data to examine ocean health issues such as hypoxia, ocean acidification, and harmful algal blooms, and changing ocean conditions such as intermittent marine heat waves.

“Every time we head out to turn the Endurance Array, the OSU team works together with folks at WHOI to improve the resilience of the gear we put out there and to improve the quality of the data collected,” said Ed Dever, Principal Investigator for the Coastal Endurance Array, serving as Chief Scientist for the Endurance 16 expedition. “It’s a tough environment. The equipment spends six months at sea, getting jostled by high waves and strong winds and serving as habitat for marine life big and small.  Yet over the last eight years, we’ve continuously made improvements  to the instruments and infrastructure to improve data return. It’s a real testament to the creativity and skills of the whole team. They never stop thinking about ways to make things even better.”

During the second leg of the cruise, a scientific party of five will join the expedition to collect sediment samples for an ongoing experiment led by Dr. Jennifer Fehrenbacher from Oregon State University. This specific scientific inquiry is an example of how the OOI was designed to add instrumentation and adapt sampling approaches to meet the needs of the scientific community it serves. 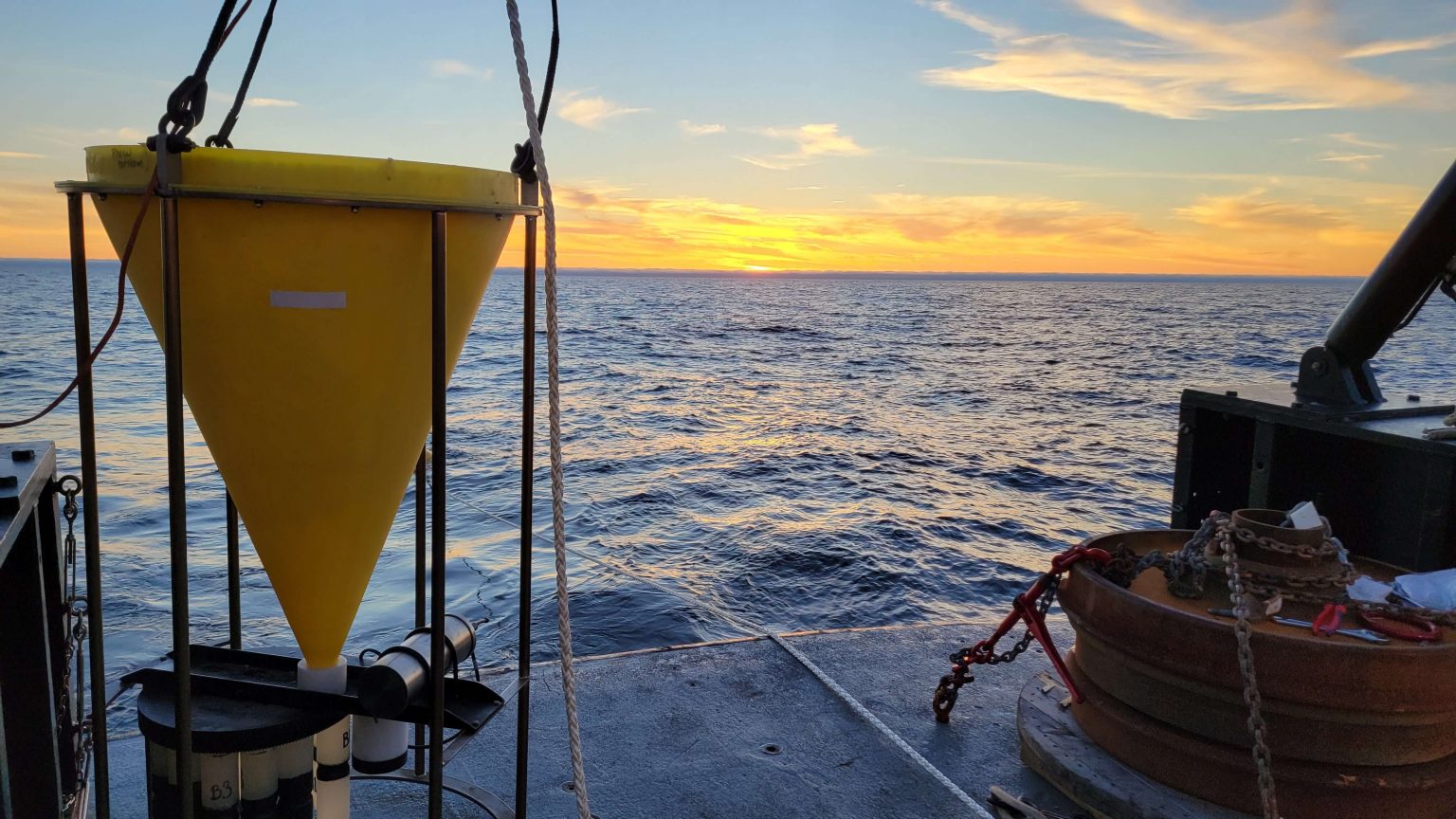 Dr. Jennifer Fehrenbacher’s team will be deployin this   McLane Mark VII 13 cup Sediment Trap, which is used to collect a time-series of material falling through the water column. The stack of three railroad wheels (on right) are the anchor. Credit: University of South Carolina.

To help answer other specific science questions, the Endurance 16 team also will be conducting sampling for researchers with instruments on the Endurance Array moorings. The team will test deployment of fish acoustic monitors on the near shore instrument frames (see picture below) of both inshore moorings and the Washington Shelf surface mooring for Taylor Chappel a researcher at Oregon State University.  The team will also collect settling organisms on devices attached to multi-function nodes on the Oregon Offshore and Surface moorings for Oklahoma State researcher Ashley Burkett. 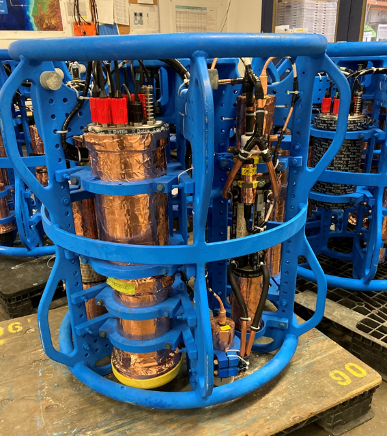 During this expedition, the team also will be deploying new equipment and other improvements. For example, a new anemometer, which sits at the top of the mooring to measure the wind speed will be deployed for the first time. A new camera made with off-the-shelf components will be put into field during for its first six-month deployment.  And, the team will be testing the rigor of its newly reinforced solar panels, which often have to withstand the weight of the occasional visit by sea lions.

The team has followed all COVID protocols and are ready to go.  They will be blogging and sharing photographs of their two-week expedition.  Bookmark this page and follow along as they share their stories. 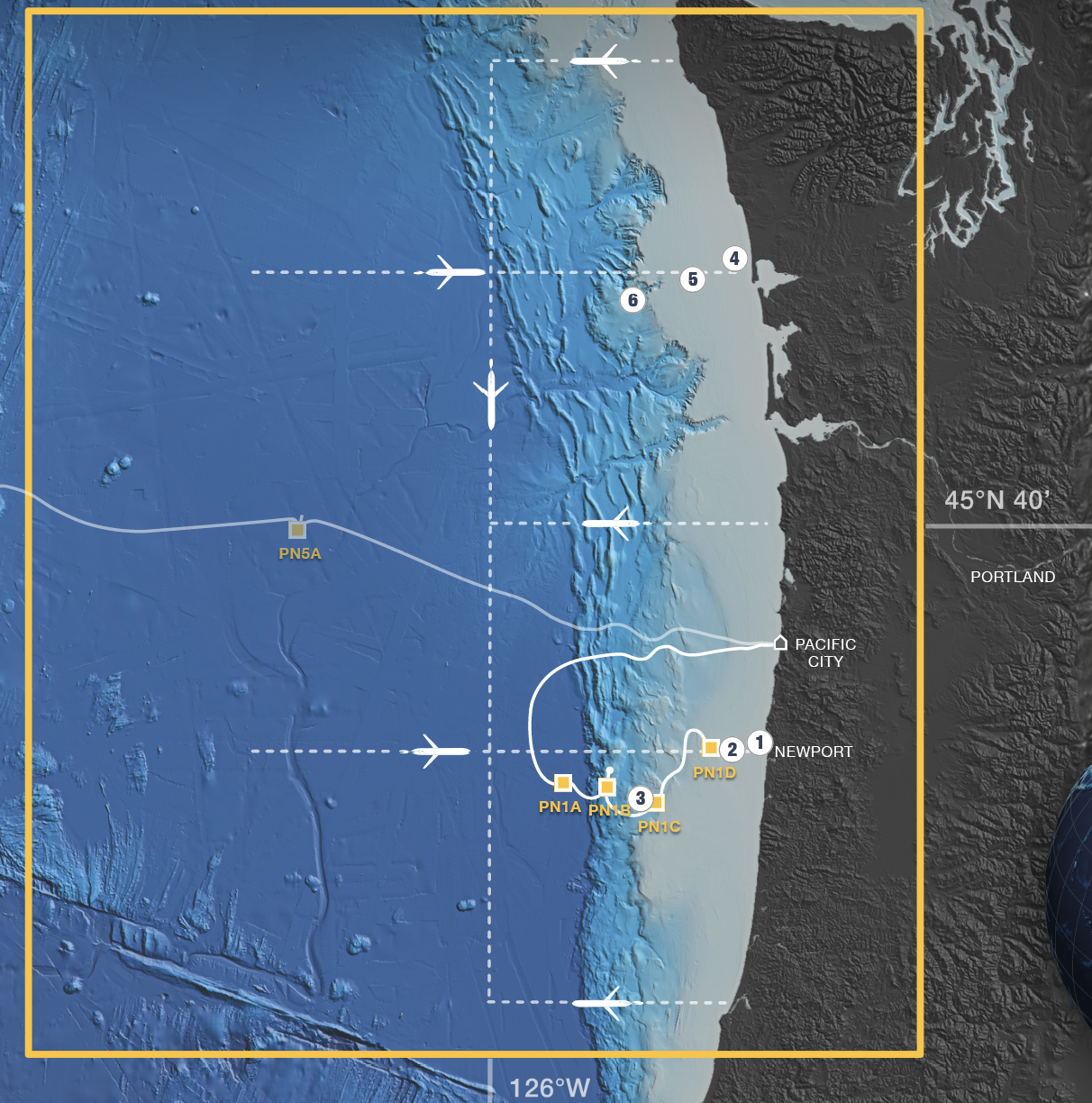 The Coastal Endurance Array, located in the NE Pacific Ocean off the coasts of Oregon and Washington, is designed to observe cross-shelf and along-shelf variability in the region.Credit:Center for Environmental Visualization UW. 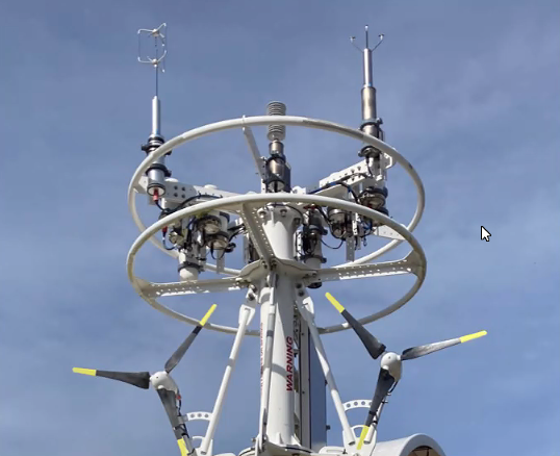 During Endurance 16, new anemometers that measure wind speed will be deployed for the first time. The anemometers are on the top ring of the halo frame. Credit: Ed Dever, OSU.
Bookmark this page and follow along as members of the Coastal Endurance Team share their stories.