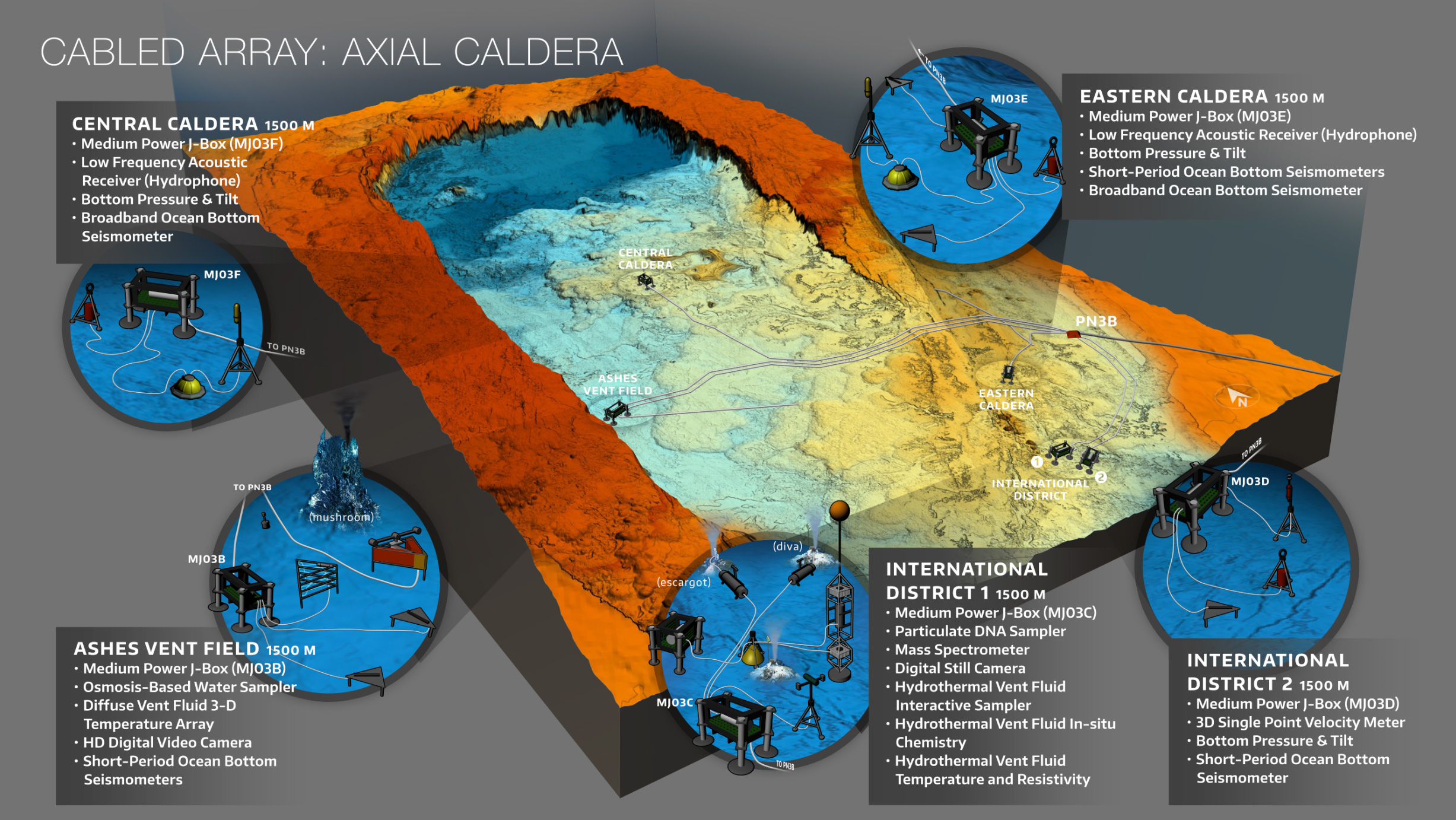 In 2016, the National Science Foundation (NSF) opened up opportunities for the community to submit proposals to add infrastructure/instrumentation onto the Ocean Observatories Initiative (OOI) marine facility and to use OOI data for research and educational purposes. Following this call, there was a rapid response from researchers to expand the Regional Cabled Array (RCA) with additional funding from the Office of Naval Research (ONR), NASA, and the international community. As of 2021, over $36M has been awarded from these sources for research and education associated with the RCA. Sixty-five awards have been made to 66 Principal Investigators (PI) and Co-PIs representing 32 institutions and 2 industry partners.

Axial Seamount is the most advanced submarine volcanic observatory in the oceans and has been the focus of numerous awards with a diverse funding portfolio. Infrastructure within the caldera currently includes 21 core instruments, funded through the OOI, and 8 PI instruments now installed and another 4 to be installed in 2021-2022. In concert, this instrumentation is yielding new insights into the dynamics of Axial Seamount’s magmatic system, diking-eruptive events, and linkages among seismic, hydrothermal, and chemical processes; and is providing the first forecasting capabilities on when this highly active volcano will erupt again. 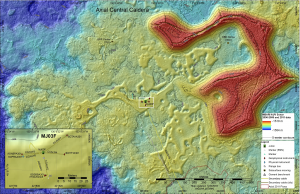 RCA infrastructure and NSF-funded PI instruments at Central Caldera as deployed in 2019. Credit: University of Washington.

At the summit of Axial, the Central Caldera site has become an important research site for development and testing of geophysical instruments with focus on geodetic applications.  RCA core instruments at this site include a bottom pressure-tilt instrument, a broadband seismometer and low frequency hydrophone. Here, three novel PI instruments, funded by the NSF, measure vertical changes in the seafloor at high resolution with removal of drift in pressure measurements.

These instruments include: 1) a Self-Calibrating Pressure (SCPR) recorder using an internal drift free pressure reference (Drs. M. Zumberge and G. Sasagawa, Scripps Institution of Oceanography), which was installed in 2018 with data now available through OOI; 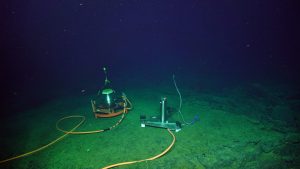 2) a flipping tilt meter (SCTAA) (Dr. W. Wilcock, University of Washington) installed in 2018 that corrects for instrument drift by calibrating the sensor against the Earth’s gravitational force using a high-resolution three-component quartz accelerometer; and 3) an ‘A-O-A’ instrument (Dr. W. Wilcock, University of Washington) installed in 2019, which uses a valve to switch an internal pressure sensor from measuring the pressure in the ocean to that inside the instrument housing to allow for correction of sensor drift. It is anticipated that this instrument will have applications to follow-on geodetic studies of the Cascadia Subduction Zone. 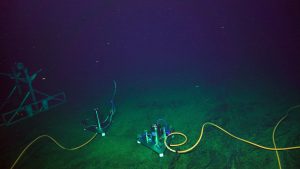 The NSF-funded Flipping Tilt Meter (right) and A-O-A instrument in 2019. The A-0-A instrument was moved to be adjacent to the Self Calibrating Pressure Recorder. Credit: UW/NSF-OOI/WHOI; V19.

These three instruments and the OOI bottom pressure-tilt instrument are all installed within 50 meters of each other, providing an unparalleled opportunity for cross comparison of the real-time continuous data. In addition to the geophysical suite of instruments, a CTD instrument will be installed at this site in 2021 (see below; Dr. W. Chadwick, Oregon State University). 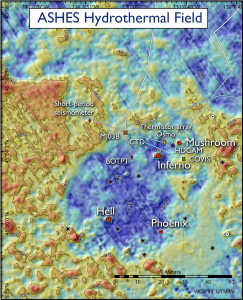 Regional Cabled Array infrastructure at ASHES in 2019. Also shown are the PI NSF-funded instruments (COVIS and CTD) and the location of high temperature vents (red dots) Credit: University of Washington.

The ASHES vent field, located near the western wall of Axial Seamount, is a site focused on investigating the impacts of seismicity on fluid flow, quantitative measurement of the flux of fluids and heat from vents, evolution of sulfide chimneys and biological communities, and development of instrumentation for life detection.

Here, RCA core infrastructure includes an HD video camera imaging the actively-venting, animal-covered edifice called ‘Mushroom’ – live streaming of video occurs every three hours for ~ 14 minutes daily, two times a month for 24 hours, and once a month for 72 hours. In addition, there are two short-period seismometers located ~20 meters and 1200 meters from the field, a bottom pressure-tilt instrument, and a novel 3D temperature array with 24 sensors that is co-installed with an osmotic fluid sampler for time-series chemical measurement of diffuse flow.

PI- provided instruments at ASHES include an NSF-funded CTD installed in August 2017 (Dr. W. Chadwick, Oregon State University), which is one of three located within the caldera of Axial Seamount to investigate the emission of subsurface brines from the seafloor (Xu et al., 2018). Another CTD was installed in 2020 on the Eastern Caldera junction box. These data are available through OOI. 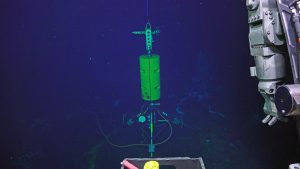 The COVIS sonar platform as installed in 2019 in the ASHES Hydrothermal Field. The sonar is focused on plume emissions and diffuse flow proximal to the hydrothermal chimneys Mushroom and Inferno. Credit: K. Bemis/Rutgers/UW/NSF/WHOI; V19.

This platform stands over 4 m above the seafloor and images plumes proximal to the actively venting ‘Inferno’ and Mushroom chimney located 10 m away, as well as sites of diffuse flow. Sonar data coupled with in situ thermal measurements document significant changes in plume variations, and modeling results indicate a heat flux of 10 MW for the Inferno plume (Xu et al., 2020). Multibeam data and data products are available through OOI. COVIS will provide key data to the community investigating the impacts of eruptions on hydrothermal flow. A NASA-funded and cabled state-of-the-art platform called InVADER (In-situ Vent Analysis Divebot for Exobiology Research; P. Sobron, SETI Institute) hosting a spectroscopic laser and 3D imaging system will be installed in 2021 on the south side of Inferno. The purpose of this award is to advance technologies, real-time sensing, and mission execution applications in hydrothermal systems to further exploration and the study of vent environments on other ocean worlds. 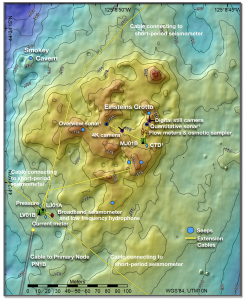 RCA infrastructure at Southern Hydrate Ridge as installed in 2019. Also shown are instruments funded by MARUM (2 sonars, 4K camera, and a CTD). Credit: University of Washington.

The cabled Southern Hydrate Ridge (SHR) site is one of the best studied methane hydrate systems in the oceans and it has been designated as an essential fish habitat. RCA infrastructure installed at the summit of the ridge includes a suite of 11 instruments to investigate the evolution of this highly dynamic system hosting multiple sites of bubble emission from the seafloor; a rapidly evolving topography marked by extremely hummocky terrain and rapidly forming collapse pits; and, at times, exposed hydrate on the seafloor. An array of short-period seismometers and a buried broadband seismometer provide real-time data on far-field and local seismicity. One goal for the triangular array of seismometers was to inform on subsurface plumbing through bubble formation.

Since 2014, Einstein’s Grotto has been the focused RCA experimental site hosting a digital still camera, flow meters, an osmotic fluid sampler, mass spectrometer, and an ADCP for imaging of the plume. Einstein’s Grotto is currently unrecognizable from when first surveyed, having transformed from a gentle hummock to a large collapse pit from which explosions of bubbles and entrained flocculant and sediment occurred in 2011, partial collapse of the pit in 2015, and, most recently, a much more subdued topography in 2020. Exposed methane hydrate within the pit has been viewed here on multiple cruises. Over the decade of imaging during RCA cruises, there has also been a dramatic change in the location, density, and thickness of bacterial mats around this area. 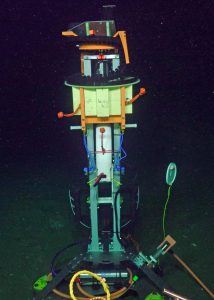 In 2018, a multi-year program “Sonar Monitoring of Natural Release of Methane Greenhouse Gas from the Seafloor – A Contribution to the Understanding of Global Change” funded by the German Ministry of Education and Research (Drs. G. Bohrmann and Y. Marcon, University of Bremen) resulted in the installation of instruments at SHR to quantify the flux of methane and bubble plume dynamics at this site. A ~3.6-meter-tall platform hosting a rotating multibeam sonar provides a 700 m across, 360° view of all bubble plumes emitted at the summit including their intensity and rise height. Scans are conducted about two hours apart. Also installed was a quantification sonar aimed at measuring gas flux and changes in seafloor topography proximal to Einstein’s Grotto. The quantification sonar is on a 2.6-meter-tall tripod that conducts 360° scans of the local water column. In 2019, this infrastructure was augmented by the addition of a cabled 4K camera and CTD. All instruments were recovered in 2020 and will be reinstalled in 2021. 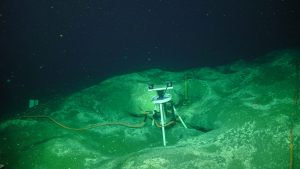 This 4K camera is focused on imaging the area proximal to Einstein’s Grotto. The area has changed remarkably over the past decade. Credit: MARUM/UW/WHOI; V19.

During the initial planning stages of the RCA, a key requirement in the design was to include significant expansion capabilities and power. In four years, the need for this requirement has been clearly demonstrated by the significant response from the community. At the 2016 OOI Design and Implementation Workshop in Salt Lake City, Utah, Dr. Margaret Leinen (Scripps Institution of Oceanography and University of California San Diego), then Associate Director for Geosciences, gave the keynote talk. In this presentation, she said “If you build it, they will come”…a prediction that has come to fruition with innovative and synergistic research into deep ocean processes focused on the cabled array.

This article was written by Deborah Kelley, Principal Investigator for the Regional Cabled Array.