Should mariners have a problem or a question regarding the arrays, please call one of the numbers below:

To ensure the safety of mariners and integrity of the ocean-based equipment, precautions need to be taken. These precautions vary according to location. The OOI worked with the Oregon Fishermen’s Cable Committee (OFCC) for siting of infrastructure and to develop precautions. The OOI sites were designated as follows:

Precautionary Area (PA): areas where the cable is not buried to target depth or where the depth of burial is not known. PA areas are advisory only, with a PA safety zone radius in all depths a minimum 0.25 nm (463m). Fishers are not restricted from fishing with gear on the seabed in PA areas.

Known Cable Exposure Areas (KCE): areas where the submarine cable is on the surface, suspended, minimally buried or visibly exposed in a wide trench. At depths greater than 300 fathoms (550m), travel is restricted to within 0.25 nautical miles (~463m) of the exposure. At depths of less than 300 fathoms (550m), the KCE safety zone is enlarged to 0.40 nautical miles (~741m) from the exposure. Inside these safety zones, fishers are prohibited from towing fish gear on the seabed. 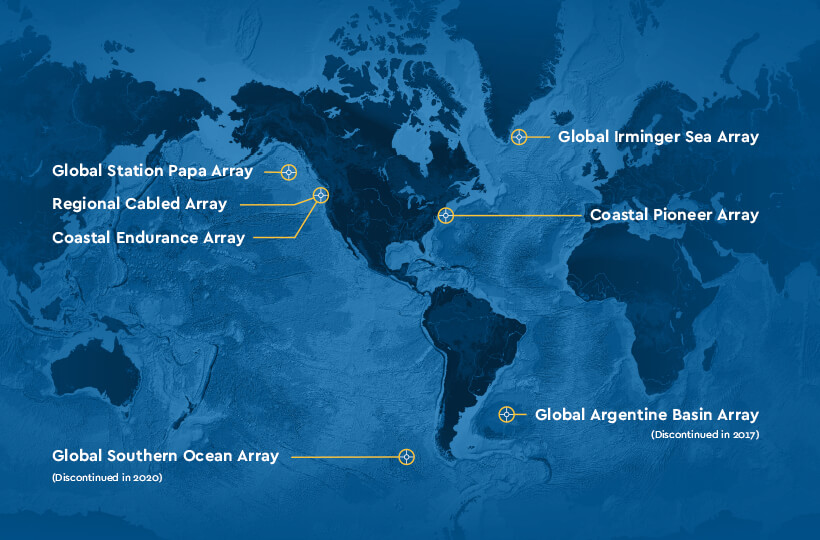 Select an array below to learn more.

A flash drive of Cabled Array locations is available upon request from the OFCC.