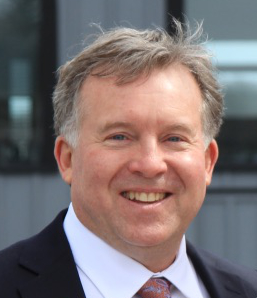 The National Science Foundation has approved the appointment of Dr. James B. Edson as the new Principal Investigator (PI) of the Ocean Observatories Initiative (OOI) Program Management Office (PMO). Edson will assume his responsibilities on March 1, taking over for Dr. John Trowbridge, who announced his intention to leave for a new position in January and has led the PMO from October 2018, when the program management office was moved to the Woods Hole Oceanographic Institution (WHOI) from the Consortium for Ocean Leadership (COL) in Washington, D.C.

“John’s done an exceptional job leading OOI and leaves very big shoes to fill, and we are delighted to have Jim assume the reins and are confident in his ability to lead OOI through the leadership transition and beyond” said Rick Murray, WHOI Deputy Director and Vice President for Science and Engineering, who led the search for Trowbridge’s replacement. “Jim has a phenomenal depth of knowledge about OOI’s early years, having served [with Trowbridge] on the ORION Science & Technology Advisory Committee during the OOI planning stages and as a member and chair of the OOI Program Advisory Committee from 2008-2013. Plus, Jim brings a wealth of experience running large government programs and academic departments. We share his excitement in leading OOI.”

Edson was an Assistant through Associate Scientist with tenure in the Department of Applied Ocean Physics and Engineering at WHOI from 1991 to 2004. He also served as a rotator at the Office of Naval Research from 1998-1999. His research interests include boundary-layer meteorology, with a focus on surface-layer turbulence, air-sea interaction and flux parameterizations. During this period, Edson was Chief Scientist for the Office of Naval Research Coupled Boundary Layers and Air-Sea Transfer (CBLAST) Defense Research Initiative, and Principal Investigator for the Construction and Management of the Martha’s Vineyard Coastal Observatory and its Air-Sea Interaction Tower at WHOI. Edson was Professor and Head of Marine Sciences at the University of Connecticut (UConn) from 2005 to 2017, where he led UConn’s successful effort to join the University Corporation for Atmospheric Research, served as UConn’s member representative for the COL, and oversaw the upgrade and stretch of the R/V Connecticut. He rejoined WHOI in 2018 as a Senior Scientist.

Edson is a fellow of the American Meteorological Society and member of the American Geophysical Union. He has written more than 80 scientific articles and has contributed to 18 scientific books. Edson received a PhD in meteorology from the Pennsylvania State University.

Edson assumes the leadership of an organization that is in excellent shape due to Trowbridge’s leadership. Among many innovations during his tenure, Trowbridge oversaw the development and launch of a new data delivery system, Data Explorer, and the transition of the cyberinfrastructure network to a new state-of-the-art data center at Oregon State University. Despite challenges imposed by costs to upgrade cyberinfrastructure, a flat budget, and Covid-19, Trowbridge ensured that the program accomplished the full scope of marine operations while staying within budget. Trowbridge enabled a highly motivated and capable team, established productive relationships within the Program and with NSF and the Ocean Observatories Initiative Facilities Board, and led a robust community engagement effort.

To ensure a smooth transition, Trowbridge will end his service as the OOI PI on March 1, but will continue half-time to support Edson during a four-month transition period. On June 30, Edson will begin his tenure as the full-time OOI PI.

The Ocean Observatories Initiative is a long-term infrastructure project funded by the National Science Foundation to gather physical, chemical, and biological data from the ocean, atmosphere, and seafloor and to deliver that data on demand and in near real-time online. The program includes moored instrument arrays and autonomous underwater vehicles deployed at critical locations in the coastal and open ocean worldwide. Data from the observatories help researchers address questions across short and long time periods, small and large spatial scales, and from the ocean surface to the seafloor. OOI is managed by the Woods Hole Oceanographic Institution (WHOI) and implemented by WHOI, the University of Washington, and Oregon State University.