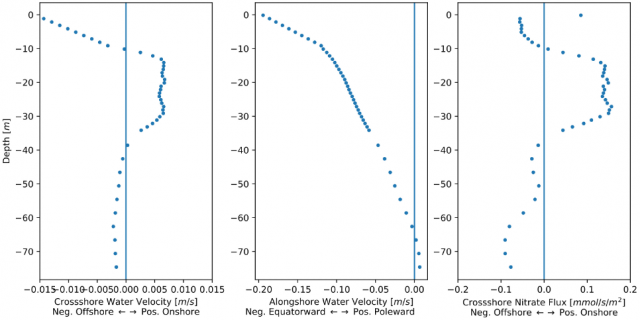 The US Pacific Northwest coastal ecosystems are primarily limited in growth from nitrate supply.  The nitrate supply that drives the highly productive marine growth in this region is primarily a result of wind driven coastal upwelling.  This work seeks to investigate cross-shelf nitrate fluxes over the continental shelf off the coast of Oregon following the installation of new nitrate and Acoustic Doppler current profilers (ADCPs) in the Ocean Observatories Initiative Coastal Endurance Array.

[media-caption path="/wp-content/uploads/2022/02/Endurance.png" link="#"]Figure 24.  A velocity and nitrate profile from the shelf site at the Newport line. Data used was from the 2019 summer, approximately mid-June to early October (deployments 13, 14, and 15). The net nitrate flux found at that site over this time period, found by vertically integrating the values above, is roughly 1.16 mmol Nitrate/second/meter coastline. [/media-caption]

The primary onshore flow of nitrate-rich water over the continental shelf is found to originate at the middle depths, consistent with previous research in the region. However, the upwelling and cross-shelf nitrate fluxes on the continental shelf are found to be in poor agreement with common upwelling indices, e.g., coastal upwelling transport index (CUTI) and biologically effective upwelling transport index (BEUTI).  Several factors for this disagreement are proposed, including the focus of the indices on dynamics farther offshore of the continental shelf.  Observed coastal wind stress, calculated on a weekly rolling average, is found to be a potential alternative for predicting nearshore nitrate concentrations. Farther offshore at the mid-shelf, only a weak correlation between observed wind stress and observed surface transport is found, suggesting the need for additional dynamics to fully explain the observed surface transport and nitrate fluxes. Correctly modelling the nitrate supply for coastal ecosystems is essential for predicting phytoplankton blooms that are vital to the production of fisheries on the coast.  Thus, understanding these limitations is of great importance for ocean-driven coastal economies.