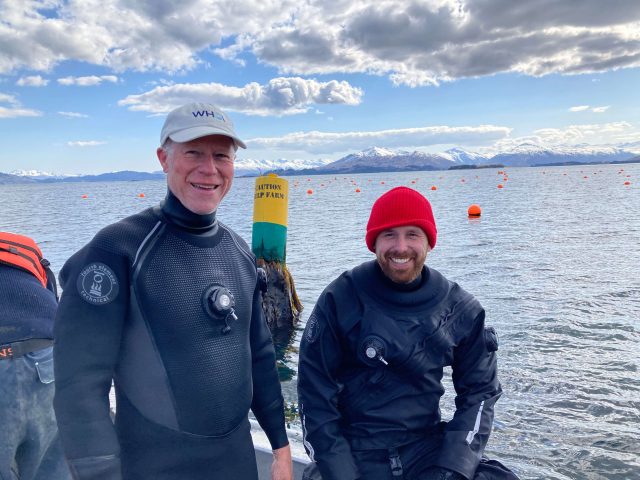 Scott Lindell wants to explore the potential to sequester carbon dioxide and help mitigate the climate crisis by growing seaweed and sinking it to the bottom of the Atlantic Ocean.

Lindell, a researcher at Woods Hole Oceanographic Institution, studies how marine aquaculture can be used for sustainable production of food and fuel. He started his scientific career studying fish farming, and “I’ve been working my way down the food chain ever since,” he says. With funding from the Department of Energy, Lindell’s team has already developed breeds of sugar kelp that yield four times the biomass of typical commercial production.

Seaweeds, like trees, uptake carbon dioxide and convert it into biomass. Oceanographic models predict that if humans sink that seaweed biomass to depths of 1000m or greater, then depending on microbial activity and dissolved oxygen in the water, it may take years or even decades for that carbon to break down. And, because the seaweed would be submerged at great depths, it would take centuries for that carbon to recirculate to surface water and re-equilibrate with the atmosphere.

“It would take an area on the order of twice the size of Texas and 40-50 years to create a forest that takes one gigaton of CO2 out of the atmosphere,” says Lindell. “And that forest might only store the carbon for another 40-50 years depending on forest fires, windfall, how fast the trees grow, and other factors.”

But with seaweed farming, Lindell says, “that same one gigaton removal of CO2 could be achieved by an operation as small as the state of Iowa in a year or two’s time, once the farms are developed.”

Lindell and his colleagues have already submitted proposals to study sinking kelp on the U.S. Pacific Coast, where the continental shelf drops off much faster and experiments can be done closer to shore. But he’s also interested in running experiments on the U.S. Atlantic Coast, where commercial farming of sugar kelp (Saccharina latissima) is growing rapidly.

“Our simple demonstration would be to bundle up a ton of seaweed and get it to the deepest parts of the OOI Pioneer Array, about 500 m deep. Then we’d surround it with a benthic lander equipped with cameras and sensors to monitor the rate of degradation and understand the environmental and ecosystem effects,” Lindell explains. He also plans to compare microbial activity and oxygen profile habitability in the sediments around the experimental site with those in sediments from an unimpacted site.

Lindell has started the process of user engagement with the OOI team to find ways to align these experiments with operations at the Pioneer array. “This works better if there’s already some environmental monitoring going on,” he explains. Since most seaweed farming operations on the East Coast are situated in New England waters, the area where Pioneer is currently deployed may be similar to the environments where sequestration efforts might take place.

Lindell believes it’s important to have thorough research on using seaweed as a carbon sequestration method before it becomes a larger operation.

“Iron fertilization has also been considered a climate solution, but early experiments were not carried out very carefully. That was a missed opportunity to learn more about how these solutions could work,” Lindell clarifies. “We want to get ahead of what’s become a building movement and make sure that early efforts are well monitored. We want to do it responsibly.”

Although it will take time to research and develop this carbon sequestration strategy into a commercially scalable operation, Lindell is optimistic about this method’s potential.

“We’ve got to do something,” he says. “I’m excited that this could be a short-term and expedient climate solution.”