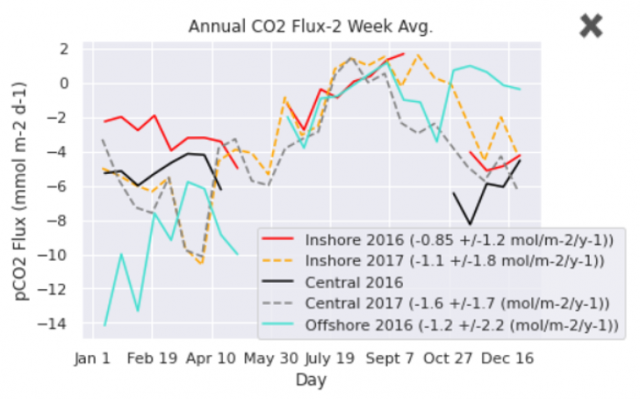 [media-caption path="https://oceanobservatories.org/wp-content/uploads/2021/02/Pioneer-for-Science-Highlights.png" link="#"]Figure 23.  Weekly average air-sea CO2 flux estimated for the Pioneer Array Inshore, Central and Offshore moorings during 2016 and 2017. A negative flux is from the atmosphere to the ocean. From Thorson and Eveleth (2020).[/media-caption]

In the summer of 2020 the Rutgers University Ocean Data Labs project worked with the Rutgers Research Internships in Ocean Science to support ten undergraduate students in a virtual Research Experiences for Undergraduates  program. Two weeks of research methods training and Python coding instruction was followed by six weeks of independent study with a research mentor.

Dr. Rachel Eveleth (Oberlin College) was one of those mentors. Already using some of the Data Labs materials in her undergraduate oceanography course, she saw an opportunity to leverage the extensive OOI data holdings to engage students in cutting edge research on a limited budget during a time when her own field work was curtailed due to the COVID-19 pandemic. Dr. Eveleth advised Alison Thorson from Sarah Lawrence College (NY) and Brianna Velasco form Humboldt State University (CA) on the study of air-sea fluxes of CO2 on the US east and west coast, respectively.

Preliminary results were presented at the 2020 Fall AGU meeting. A poster authored by Thorson and Eveleth (ED037-0035) evaluated pCO2 data from the three Pioneer Array Surface Moorings during 2016 and 2017. They showed that the annual mean CO2 flux across all three sites for the two years was negative, meaning that the continental shelf acts as a sink of atmospheric carbon. The annual average flux was -0.85 to -1.6 mol C/(m2 yr), but the flux varied significantly between mooring sites and between years (Figure 23). Investigation of short-term variability in pCO2 concentration concurrent with satellite imagery of SST and Chlorophyll was consistent with temperature-driven, but biologically damped, changes.

A poster by Velasco, Eveleth and Thorson (ED004-0045) analyzed pCO2 data from the Endurance Array offshore mooring. Three years of nearly continuous data were available during 2016-2018. The seasonal cycle showed that the pCO2 concentration in water was relatively stable and near equilibrium with the air in winter, decreasing in late spring and summer (Figure 24). Short-term minima in summer were as low as 150 uatm. Like the east coast, the mean air-sea CO2 flux was consistently negative, meaning the coastal ocean acts as a carbon sink. The annual means at the Washington Offshore mooring for 2016, 2017 were -1.9 and -2.1 mol C/(m2 yr), respectively. The seasonal cycle appears to be strongly driven by non-thermal factors (on short time scales), presumably upwelling events and algal blooms.

These studies, although preliminary, are among the first to use multi-year records of in-situ CO2 flux from the OOI coastal arrays, and to our knowledge the first to compare such records between the east and west coast. Dr. Eveleth’s team intends to use the rich, complementary data set available from the OOI coastal arrays to investigate the mechanisms controlling variability and role of biological vs physical drivers.

In the summer of 2020, the Rutgers University Ocean Data Labs project worked with the Rutgers Research Internships in Ocean Science to support ten undergraduate students in a virtual Research Experiences for Undergraduates  program. Rutgers led two weeks of research methods training and Python coding instruction. This was followed by six weeks of independent study with one of 13 research mentors.

Selkow evaluated DO data from Endurance Array Surface Moorings during 2017 and 2018. She presented this work as a poster at the conclusion of her summer REU. Selkow focused on the question: Are there similarities in the dissolved oxygen concentrations off the coast of Oregon and Washington during a known low oxygen event?  She also considered why there might exist differences based on the spatial variability of wind stress forcing, i.e., do the strong Oregon winds cause dissolved oxygen concentrations to be lower at the Oregon mooring compared to the Washington moorings. Finally, she reviewed the data and tried to answer whether the oxygen data were accurate or affected by biofouling.

Selkow focused her attention on low DO observed in the summer of 2017.  While Barth et al. (2018) presented a report on these data for one event in July 2017, she expanded the analysis to include the Washington shelf and inshore moorings.  She plotted time series data and used cruise data to validate these time series.  While overall seasonal trends in DO were similar, she found dissolved oxygen is routinely more quickly depleted off the coast of Oregon than Washington during a low oxygen event (Figure 25). She also looked at the cross-shelf variability in DO time series and found dissolved oxygen is more quickly depleted at the shelf mooring than at the inshore shelf mooring. Upwelling is known to drive the low oxygen events and she inferred that the weaker southward winds over the Washington shelf may be why DO decreases at a slower rate off Washington than Oregon.

Selkow, A. and T. Connelly. Low Dissolved Oxygen off Washington and Oregon Coast Impacted by Upwelling in 2017,  Accessed 13 Jan 2021. 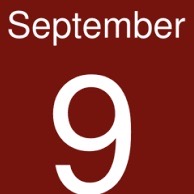 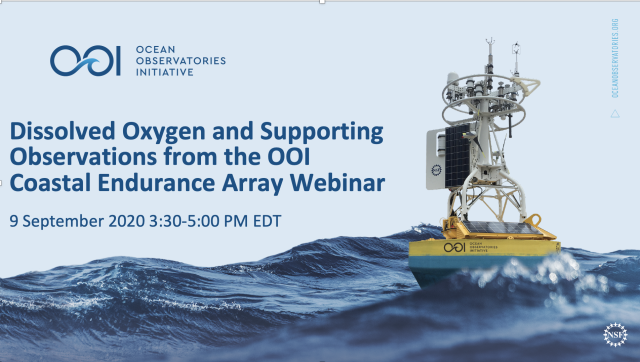 In this webinar, we present dissolved oxygen (DO) data from the Ocean Observatories Initiative’s (OOI) Coastal Endurance Array off Oregon and Washington.  DO is recorded on platforms across OOI.  These measurements contribute directly to the OOI science goal of understanding ecosystem changes. The Endurance Array measurements contribute specifically to understanding the seasonal development and synoptic variability of hypoxia. DO measurement platforms on EA include moorings, gliders, and profilers.

The webinar will be presented in four pre-recorded sections with a live Q and A following each section. In part one, we will provide an overview of OOI DO measurements across OOI. The remaining three parts will cover surface mooring time series, glider measurements, and profiler measurements respectively. For each of these platforms, we will describe the sampling, review quality control procedures and issues, and present example plots. We will focus on recent data, including telemetered data collected since the latest Endurance cruise in July 2020. We will present the DO time series, along with related observations of wind velocity and ocean temperature.

Please register in advance for this webinar here. After registering, you will receive a confirmation email containing information about how to join the webinar.

The webinar sections will be posted to oceanobservatories.org. Pre-registered webinar participants can sign up for follow-up discussions on accessing these OOI data on 10 September. Individuals can also contact the OOI HelpDesk and set up similar discussions at a later date.