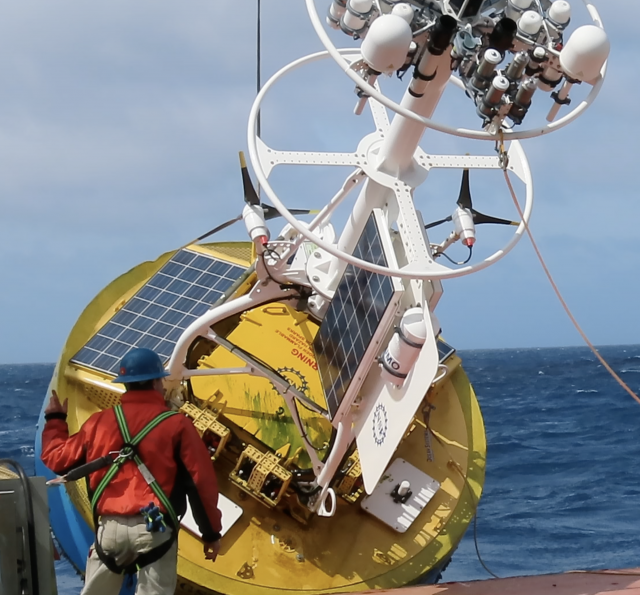 Five years of data have made a significant difference in understanding of the complex processes occurring in the remote and hostile conditions of the Southern Ocean. In its five years of deployment, OOI’s Southern Ocean Array has provided critical data that enhanced weather modeling and forecasting, while providing means to study the mechanisms behind Southern Ocean warming and the storage of carbon at depth.

Four OOI moorings were deployed in February 2015 in a very sparsely sampled area in the Southern Ocean (55 degrees South, 90 degrees W) with the goal of helping modelers, forecasters and scientists understand this dynamic and volatile environment. One mooring was decommissioned in 2017. Two bottom halves remained in place through 2018 and a single surface mooring remained in place through January 2020.  Collectively, these deployments provided a continual treasure trove of data to scientists, modelers, and forecasters.

This data stream is particularly important because the Southern Ocean is not only warming faster than other parts of the world ocean, it has also been implicated as the major region for ocean uptake of carbon dioxide.

The benefits of deployment were evident. When the moorings were first deployed in 2015, data were not initially integrated into the World Meteorological Organization’s Global Telecommunication System (GTS).  In August 2017, when the data were added to the GTS, making them more easily accessible for weather forecasters and modelers, they had an almost immediate impact on forecasting by the European Centre for Medium-Range Weather Forecasts (ECMWF).  In August 2017, for example, OOI’s Surface Buoy picked up a low-pressure system moving through the area.  Integrating these data into forecast models, researchers filled in some key spatial gaps in their observational coverage, reducing the error in 24-hour forecasts.  With improved data, ECMWF was better able to forecast the next huge Southern Ocean storm with a central pressure around 955 mb that had simultaneous major impacts on southern South America, Drake Passage, and the Antarctic Peninsula.

The Southern Ocean Array also provided a platform for interagency and interdisciplinary collaborations. The National Science Foundation and its UK counterpart, the National Environmental Research Council joined forces to support two expeditions in 2018 and 2020. The 2018 expedition recovered the bottom halves of the moorings, while outfitting the surface mooring with equipment to measure silicate and nitrate using “lab-on-a-chip” technology (miniaturized analytical devices that integrate laboratory operations into a single chip on a very small scale.) This work was an investigation undertaken by Dr. Adrian Martin of the UK’s National Oceanography Centre and an investigator for CUSTARD (Carbon Uptake and Seasonal Traits in Antarctic Remineralisation Depth). The sensors and the surface mooring were recovered during the 2020 expedition.

“CUSTARD focuses on how interactions between marine organisms, nutrients in the water and the ocean circulation control the storage of carbon at depth. To do so requires information through the year because of the boom and bust seasonal cycle of phytoplankton,” explained Martin. “The mooring gave us both a variety of important data as well as a platform to deploy some of our own sensors year-round in the challenging environment of the Southern Ocean. The CUSTARD project benefited immensely from our collaboration with OOI. “

The OOI moorings also provided scientists with a means to study the mechanisms behind Southern Ocean warming.  In a study led by Sarah Ogle of Scripps Institution of Oceanography, scientists found that just a few extreme storm events drive most of the mixed-layer deepening, suggesting that air-sea heat exchange is a highly episodic process.

“Only the largest storm events each year are able to mix the upper ocean enough to influence the ocean interior,” said Dr. Sarah Gille, also of Scripps and a member of OOI’s Facility Board.  “With the removal of OOI, we’ve lost one window into these big events, but from the OOI data, we’ve gained some perspective on what types of measurements need to be collected to understand air-sea exchange in the region. In the future, I hope that we’ll be able to make use of newer autonomous systems to continue the research started in the Southern Ocean with OOI.”