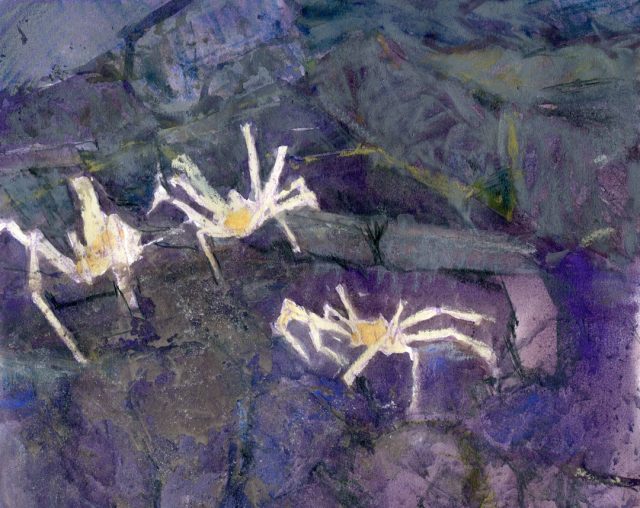 Two artists were aboard the R/V Thomas G. Thompson during this summer’s OOI Regional Cabled Array VISIONS’21 cruise. Undergraduate student Genevieve Kent was leaving the Thompson for Leg 1 of the four-week cruise. Professional artist and lifelong learner, Catherine Gill, was was onboard for Legs 3 and 4 of the summer expedition, including an extra two days at sea while the Thompson was diverted for a rescue mission of two Ocean Exploration Trust remotely operated vehicles (ROVs).

While their physical paths didn’t cross aboard the ship, each spent their time similarly while onboard – serving as a member of the scientific party, taking regular shifts to ensure samples were collected and underwater footage from the ROV Jason was catalogued and archived.  They also spent whatever free time they had capturing their experiences in creative endeavors.

Because of space limitations on the ship, Gill came equipped with only those supplies that would allow her to draw and paint in very limited space. As a plein air painter, Gill has painted everywhere from in a kayak to in the forest canopy, so she knew what kind of supplies she would need.  She brought with her the basics – a standing tripod easel and a small palette. She also brought with her a very small kit that she could keep on her lap and create 5×7 paintings.

“It’s very busy on these legs, but whenever I could find an hour, maybe an hour and a half, I would find a spot on the ship. And I’d set up and do paintings of whatever was happening, putting the new profiler in or pulling up the old one, or capturing some of the very cool stuff on cameras being broadcast by the ROV Jason,” she said. “’I’m sitting there in the Jason control van and watching these scenes that are amazing. There’s different sea life coming from all over the place. The ROV lands on the bottom and you see chimneys and all of the amazing sea life that is down there.  It was just incredible.”

Gill painted as things unfolded aboard the Thompson and took screen shots of Jason scenes so she would have a point of reference later on. Regional Cabled Array Principal Investigator Deb Kelley also provided Gill with Jason video that Gill took home to her studio to create bigger paintings of the sea life and Jason operations after she left the ship.

But Gill recounted that she was most at home aboard the ship, painting the experience in real time in “plein air.”

“Because I paint on location, not just from photographs, I know there’s a real difference when you paint from life than when you paint from a photograph. The marks you make are more convincing. If you feel the cold, if you’re aware of the silence, if the wind is blowing on you, you give your painting more than just what your eyes can see,” she explained.  But I couldn’t get down to the seafloor to actually paint on location, so having access to video is the next best thing. Having high-definition video to paint from, I can get the feel of what that weird fish is doing, better understand the complexity of those tube worms and deep-sea critters all moving and doing their things, and watch that hydrothermal vent smoking and interacting with the seawater.”

Gill created 13 drawings and paintings while onboard.  After her return, she has created another eight to 10 larger-scale paintings. More of her work can be seen on her website, Instagram, and Facebook (Catherine Gill).

Kent, a third-year undergraduate student studying marine biology at the University of Washington, merged her passion for marine science with her artwork while aboard the Thompson.  Her interest in marine science was sparked during a seminar class on hydrothermal deep sea vents taught by Kelley. Kent took advantage of the opportunity to participate in a shipboard experience that she learned about in this class to see if she really wanted to pursue a career in marine science.

Kent was accepted to participate in VISIONS’20, but student participation was postponed until 2021 due to COVID restrictions. So, she jumped at the opportunity to sail on the Thompson a year later as part of the VISIONS’21 student contingent.

Her favorite part of the experience was doing shifts in the control van, where her job was to log everything that was happening with Jason as it was used to recover and deploy equipment plugged into the Regional Cabled Array. “I really liked being able to be a part of what was happening. It reminded me a lot of when I was a stage manager for live theater, being in the hot seat and you have to know your role in everything. But it was also really amazing to watch the monitors in real time and see all that was happening there, live and being a part of it.”

Kent works in many mediums from water colors to acrylic paints, to markers, but for this project she chose water colors because they fit the theme of the ocean and can help evoke its many changing moods. While Kent is not a professionally trained artist, she is naturally talented. She used her time in the control van to sketch with colored pencils and capture images of marine life on the bottom that she painted when she returned to her in-home studio.

Once home from the cruise, Kent immediately sat down and started to capture her experiences in watercolors. She used her sketches and images as source material. She is spending as much time as possible on her artwork, as she resumed classes and labs as a full-time student.  She has completed several paintings of marine life and has many others in varying stages of completion. Kent can be contacted here.

Plans are in the works to have both artists show their creations at an exhibit at the University of Washington later this spring.  A sneak preview is provided below: