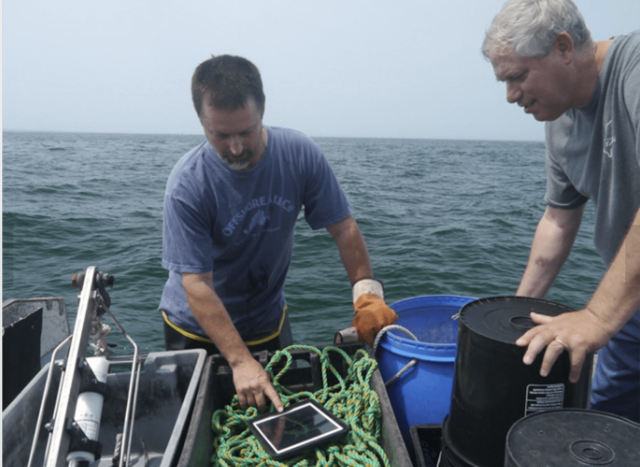 Since 2014, fishers in southern Rhode Island and scientists from Woods Hole Oceanographic Institution (WHOI) have been working collaboratively to share data and learn from one another. For the past seven years, fishers have been collecting oceanographic data through the Commercial Fisheries Research Foundation’s (CFRF) Shelf Research Fleet and WHOI has shared data collected by the Pioneer Array.

Through this partnership, fishers have come to value data from the Shelf Research Fleet and the Pioneer Array, as well as the insights of researchers who have spent years studying some of the most productive fisheries in U.S. waters. WHOI provides Pioneer data to fishers, and fishers provide oceanographic data collected during their normal fishing operations using CTDs which measure conductivity, temperature and depth information through the CFRF/WHOI Shelf Research Fleet. When the CTDs are brought onboard they wirelessly communicate the temperature data to an iPad where fishermen can view oceanographic conditions and ultimately upload the data to scientists. These CTD measurements provide the physical properties of sea water, which help determine the location and composition of the catch. 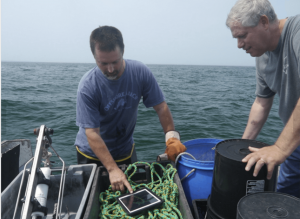 “This arrangement is a good example of how if people are willing to listen and really learn to value issues that are going on for another group, remarkable things can occur,” said Glen Gawarkiewicz, a WHOI researcher who leads the CFRF -WHOI Shelf Research Fleet.

In December, Gawarkiewicz visited the sea surface temperature website maintained by Rutgers University. There he noticed a sea surface temperature image that seemed to suggest a patch of warm, salty water known as a warm core ring forming directly adjacent to the continental shelf in the vicinity of the Pioneer Array. Warm core rings form when the Gulf Stream becomes unstable. These meanders  can break off forming a swirling mass of water dozens of miles across, with warm water at the center that can be transported away from the Gulf Stream and into normally cold coastal waters of New England. Once there, such eddies can disrupt ecosystems and affect weather patterns for weeks. 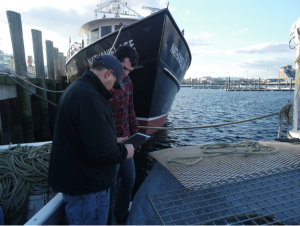 Gawarkiewicz then went to the Ocean Observatories Initiative data portal and made plots that confirmed the existence of high-salinity surface water near one of Pioneer’s offshore moorings and  near the seafloor of one of the array’s inshore moorings. The conditions, he said, were very much like an event in January 2017 in which fish normally associated with warm Gulf Stream waters were caught near Block Island. The event in January 2017 was initially identified in Shelf Research Fleet data and then confirmed in Pioneer Array glider data analyzed by Robert Todd of WHOI.

Acting on the solid relationship built between WHOI and the CFRF, Gawarkiewicz emailed CFRF staff to warn them that conditions were changing and that they should be on alert for changes in the fishery. Shortly after, he received a phone call from Shelf Fleet collaborator, Aubrey Ellertson, who had reported that fishers were noticing an increase in water temperature on the bottom of the seafloor, and an impact on their catch. For some fishers, the Jonah crab fishing declined, and for others they were not seeing traditional fish species caught in their gillnets.

This exchange highlights the strong partnership between WHOI and the Rhode Island fishing fleet. The collaboration has helped participating fleet members recognize oceanographic processes and relate their fishing catch to processes discussed with WHOI scientists like Gawarkiewicz, and his colleagues Magdalena Andres, Ke Chen, and Massachusetts Institute of Technology/WHOI Joint Program graduate Jacob Forsyth. At the same time, Gawarkiewicz and his team have learned from the fishing community about the impacts of warm core rings on species distribution, their catch and, more broadly, on the shelf ecosystem.

“I knew to pass along this alert because members of the Shelf Research Fleet have taught me about what fishing outcomes are likely from some changing ocean conditions,” said Gawarkiewicz. “It is truly remarkable how much we have been able to learn from each other.”

Gawarkiewicz believes that this event demonstrates both the practical and intellectual value of the Pioneer Array data in improving understanding of sub-surface exchange processes. “Without Pioneer, we would not know the bottom salinity nor been able to give the fishers a heads-up as to what to expect. This shows how Pioneer is having a direct impact on how, when, and where people are fishing.”

To hear an audio piece with interviews with Gawarkiewicz, Aubrey Ellertson and others, listen here. 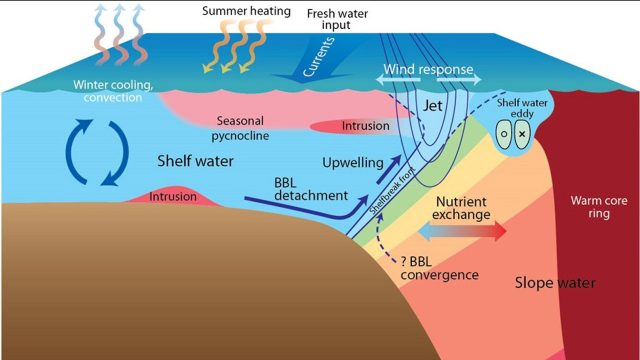 The location of the Ocean Observatories Initiative Pioneer Array has been ideal for understanding recent, unprecedented changes in temperature and ocean properties on the continental shelf and slope off the coast of New England, coincident with an increase in warm core rings at a time when the Gulf Stream has grown increasingly unstable. That’s the conclusion of a review paper published last month in the Journal of Operational Oceanography.

The paper, written by Glen Gawarkiewicz and Al Plueddemann of Woods Hole Oceanographic Institution, details how the components and location of the array were determined and how the data gathered there has changed scientific questions being asked in this critical region. The array also provides a unique observatory model that can be applied in other shelf break regions across the world.

“We already knew a fair bit about what was happening in the region, but what we’re seeing now isn’t what we expected,” said Plueddemann. “Fortunately, the array was designed and constructed in such a way that we were ready for just about anything.”

The shelf break front stretches along the U.S. Northeast Coast from Georges Bank to Cape Hatteras, dividing cooler, fresher waters of the coast and continental shelf from warm, saltier waters of the slope. It is a complex, productive, and constantly changing area, driven by the interaction of winds, currents, and offshore rings.

Prior to the Pioneer Array, data from the shelf break came primarily from stationary moored instruments or from short-term, mobile observations provided by ocean gliders and towed shipboard systems. In designing the Pioneer Array, scientists and engineers working with the NSF-funded Ocean Observatories Initiative integrated moorings, gliders and propeller-driven AUVs to provide a long-term, multi-dimensional data set that blends the advantages of multiple observing technologies. This is particularly important as ocean processes occurring at the shelf break occur on a variety of space and time scales.

Gawarkiewicz and Plueddemann point out that in addition to enabling new scientific discovery, data from the Pioneer Array has the potential for real-time applications to help track and forecast hurricanes and winter storms, improve search-and-rescue operations, and the siting and operation of off-shore wind installations.

Since becoming operational in 2016, the Pioneer Array has gathered near-continuous data across a 24,000 square-kilometer swath of the shelf break region. By combining moorings, gliders, and AUVs, the array has provided the scientific community with high-resolution observations across space and time, which are unprecedented in their scope and detail and are also freely available on the Ocean Observatories Initiative data portal.

“We haven’t even scratched the surface yet,” said Plueddemann. “There’s still lots of potential to mine in the Pioneer Array data.”

The Ocean Observatories Initiative (OOI) is a long-term infrastructure project funded by the National Science Foundation to gather physical, chemical, and biological data from the ocean, atmosphere, and seafloor and to deliver that data on demand and in near real-time online. The program includes fixed instruments and autonomous underwater vehicles deployed at key locations off in U.S. coastal waters and in the open ocean. The OOI currently maintains arrays off the Northeast and Northwest coasts of the U.S., the Irminger Sea southeast of Greenland, and at Station Papa in the Gulf of Alaska, as well as a seafloor cabled array off the coast of Oregon. Data from the arrays help researchers address questions ranging from rapidly changing weather events to long-term climate change and from air-sea interaction to sea floor processes. OOI is managed by the Woods Hole Oceanographic Institution (WHOI) and implemented by WHOI, the University of Washington, Oregon State University, and Rutgers, the State University of New Jersey.