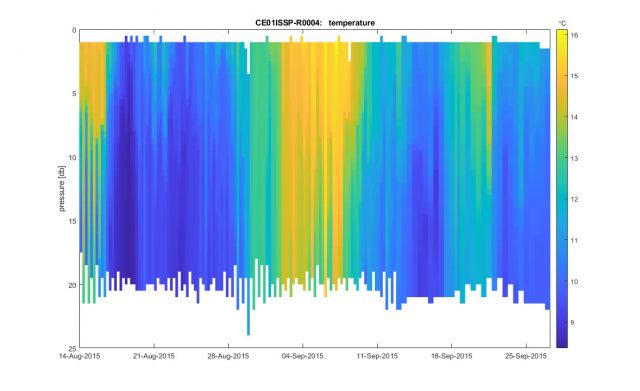 The sea surface is the hardest place to work, according to Jonathan Fram, Project Manager of the Coastal Endurance Array. That’s because at the surface, waves are constantly sloshing around. At any time, a large wave can tug on mooring winch lines, creating sudden tension, which can wear down cables and even cause them to break.

Scuba divers know that surface waters are rough, but below a certain depth—about one wave orbital below the surface—the waters calm significantly. Unfortunately, a lot of great science takes place at the surface, so it’s important for sampling instruments like the Coastal Surface Piercing Profiler (CSPP) to be able to withstand the waves at and near the surface.  Fortunately, OOI engineers have found ways to meet the many challenges of working in this rough environment.

“The Coastal Endurance Array Team has made changes to the CSPP to make it more robust, so that we can get the kind of continuous time series that are so valuable to scientists,” said Fram.

A CSPP spends most of its time near the sea floor, but either two or four times a day, the profiler winches itself up to the surface, taking samples as it ascends. Once it reaches the surface, the profiler sends its data back to shore and then quickly returns to the safety of the seafloor. Profilers are important ocean observatory tools because they can help capture what is happening at certain depths where stationary instruments aren’t present. “We’ve had times where you get a persistent chlorophyll bloom at a certain depth where there is zero mooring data,” explained Fram. “So the CSPP sampling is needed to make sense of what’s happening. It’s impossible to have all the instruments at all depths. The CSPP fills in this gap.”

Last year, the Coastal Endurance Array team reviewed their activities looking for ways to reduce lost time at sea. One thing they discovered was that the anchor systems of the CSPPs were unreliable. To deal with this problem, the team created a new kind of anchor. The old profiler anchors had a chain between the profiler and anchor that helped dampen the waves so that the device was not tugged on when resting in between profiles. The chain, however, made it difficult to deploy the anchor in an upright position. Anchors need to be deployed upright so their recovery floats can be acoustically released. The team redesigned the anchors so they now behave like a weeble wobble toy that is weighted so it always rights itself. This new design makes it hard to deploy an anchor upside down, making the anchors more reliable.

The team also made updates to the modems that send data to shore. When the CSPP is at the surface, the winch must stay on because it keeps the antenna vertical. This time-on takes up about a quarter of the battery power. To reduce the power demand, the team switched out some of the iridium modems for cellular modems, which has allowed the CSPPs to send data more quickly. A faster modem means that the profiler spends less time at the surface, not only saving power, but reducing the risk of being damaged by a large wave. The team is currently working on upgrading to faster cellular modems that can connect further from shore.

A third innovation involves improvements to the batteries.

“When waves tug on the winch, it goes from being a power sink to a power source. That sometimes creates power spikes that can fry the connectors. So we’ve rewired the batteries to make them more robust,” explained Fram. The rewiring is expected to reduce the number of power failures and keep the CSPPs running continuously. “Since April when we first started using the rewiring scheme, we’ve had four profilers in the water with no problems for six weeks,” said Fram.

The team also is in the process of replacing batteries that power the profiler with their own design of rechargeable batteries. While OOI engineers prefer to use commercially available parts for easier repair and replacement, when parts on the market don’t fit their needs, they design their own. The new batteries will be more reliable than those they are replacing. The newly designed batteries will also be deployed on the wire-following profilers on the Coastal Pioneer Array.

“My focus is on making all of the Coastal Endurance instrumentation work,” said Fram. “When we’re able to get a full three months’ deployment through the winter, through super rough seas, that makes my day. Making improvements is what I look forward to the most.”