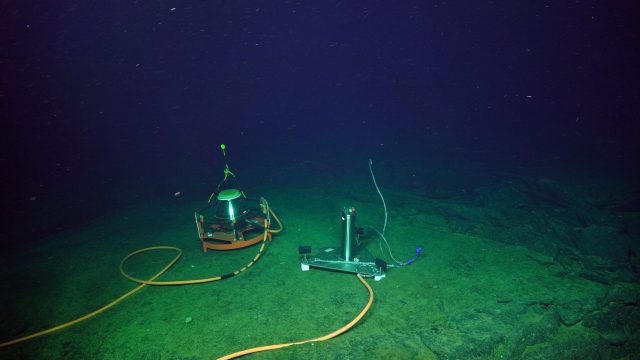 The Regional Cabled Array (RCA) provides power and bandwidth to a set of core OOI pressure sensor and tiltmeter instruments, developed by Dr. W. Chadwick, which measure subsidence or uplift of the seafloor, an important indicator of activity at Axial Seamount.  But these instruments undergo slow instrumental drift, which can be misinterpreted as seafloor height changes. To increase measurement accuracy, three novel instruments have been added to the RCA – the self-calibrating pressure recorder, flipping tilt meter, and A-0-A pressure sensor – to account and correct for instrument drift.

Researchers are field testing these new drift-and pressure-measuring instruments and comparing results with the conventional instruments onsite, with the intent of identifying which might be the most reliable over the long-term and under specific conditions. The pressure and tilt data being collected and served by these instruments are being incorporated into models that are increasing understanding of volcanic activity at isolated and hard-to-measure sites such as Axial Seamount. The instrument placements and ongoing research is supported by the National Science Foundation.

Dr. William Wilcock, of the University of Washington, oversees the flipping (or rotating) tilt meter and the A-0-A (A zero A) sensor deployed on the RCA for three years at Axial: it will be recovered this summer.  The A-0-A is currently deployed within Axial’s Caldera at the Central Caldera site.

Tilt meters are widely used on volcanoes because when volcanoes inflate the tilt of the ground changes. Because conventional tilt meters drift a lot, they are only useful in environments where there are big signals, or where changes happen quite quickly. The flipping tilt meter corrects for this drift and allows it to be used in areas with smaller, more subtle changes.

Wilcock explains the corrective principle, “I have an old-fashioned kitchen scale with a rotating needle.  Every time I put the tray on top of the scale, I have to zero it out by turning a dial.  All three instruments are based on resonant quartz crystal sensors which drift, so our calibrations are similar to the principle in a kitchen scale with a dial adjustment. “

“Every month we rotate one of the horizontal channels into the vertical to measure the acceleration of gravity, which doesn’t change. So we compare the rate of acceleration of gravity from the prior measurement and calculate how much the instrument had drifted and correct for that drift,” added Wilcock.  Wilcock and his team have tested the flipping tilt meter on land at Piñon Flat in California and now on the seafloor at Axial Seamount.

At Axial, the flipping tilt meter has been proven to measure tilt within about one part in 106—a very small tilt signal. Wilcock hosts data collected by the flipping tilt meter through IRIS, the Incorporated Research Institutions for Seismology. Wilcock and his team are currently writing a paper where the calibration data from the instrument will be shared.

When the valve switches to the internal pressure of the instrument, the drift of the two pressure sensors can be measured by comparing their reading to a barometer inside the instrument.  If the calibration is working, then the two calibrated readings of the two sensors should give the same reading when the valve switches back and they measure the pressure at seafloor.  Early results show that they agree within a few millimeters per year in 1500 meters of water.

University of Washington graduate student Erik Fredrickson is using data from the Flipping Tilt and A-0-A meters to help refine models of the inflation occurring at Axial Seamount. “With pressure data, you can see the pressure increasing and decreasing in minutes. Pressure measurements work opposite of what you might expect for we are basically measuring the weight of the water. So as a volcano inflates, it lowers pressure on a seafloor instrument, and when it erupts, we get a higher-pressure signal. It’s really helpful to have accurate pressure measurements so we can understand how the volcano is behaving.”

Drs. Glen Sasagawa and Mark Zumberge of the Institute of Geophysics and Planetary Physics at Scripps Institution of Oceanography, University of California, San Diego conceived of and built a self-calibrating pressure recorder (SCPR) in 2013. They initially tested their battery-operated prototype off the coast of California. All data were stored on the instrument, which had to be retrieved by boat and uplinked data back to shore.

The SCPR, installed at Axial Seamount in 2018, was a much more sophisticated version consisting of many mechanical elements, including a deadweight tester, an instrument whose history dates back to the 19th century.  The deadweight tester consists of a piston that fits inside a closely spaced cylinder, over which a mass is placed. Oil and hydraulic fluid are pumped in until the tester floats up in the middle of the cylinder, causing the piston to rise up. (see diagram below). When that occurs, the weight of the piston (mass x gravity) is balanced by the pressure acting on the surface area of the piston on the bottom. A mathematical formula is applied to calculate pressure (mass x gravity divided by the area). 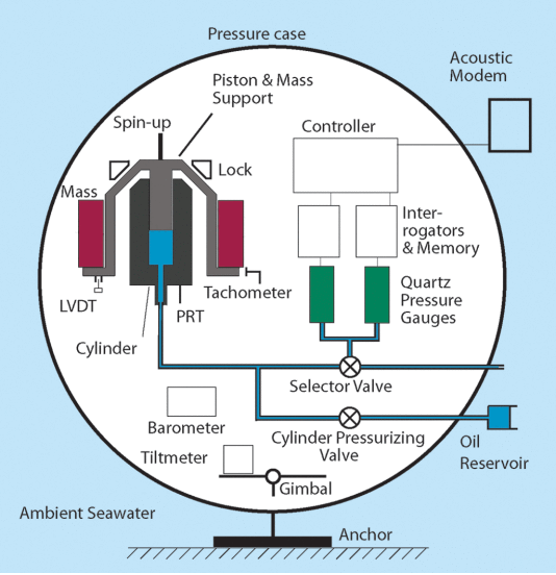 The key components of the SCPR. A 41.6-cm diameter sphere contains two recording pressure gauges which record ambient seawater pressure. Once every ten days for a period of 20 min the two gauges are hydraulically connected to a piston gauge that provides a reference pressure used to determine their drift rates.[/caption]

One key change since the SCPR prototype is that it is no longer battery-powered. “RCA provided us with a slot on the cable and took care of getting the instrument placed and plugged into the network, and then getting the data onshore to Seattle,” explained Sasagawa. “From an investigator’s perspective, all I have to do to access our data is log onto an FTP site, grab some data, and I’m good to go.”

Every three months or so, Sasagawa logs onto a computer terminal in his office to gain access to the control panel of the SCPR calibrate and operate the SCPR.  “I have direct communication with an instrument that is some 1500 meters under the sea, hundreds of miles off the Oregon coast. It’s definitely very cool and an amazing capability,” he added.

The goal is to keep this SCPR onsite at Axial for five-years, during which time data are consistently transmitted and available for researchers here. Sasagawa hopes to next test the efficacy of the SCPR at the Cascadia subduction zone, which runs from Vancouver Island in Canada to northern California, with smaller signals than at Axial.

“I would just add that we can’t overemphasize the importance of having power and communications on the seafloor. With the cable right there, we have the really critical things that we take for granted in our daily lives… Just plugging something into the wall socket, and turning on Wi-Fi.  And certainly in the oceans, we just cannot take that for granted. This is key infrastructure. And having data come back in real or near real time is critical,” concluded Sasagawa.