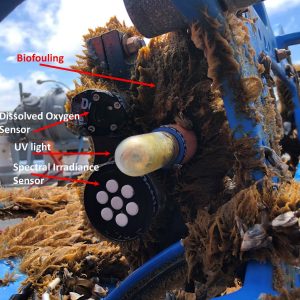 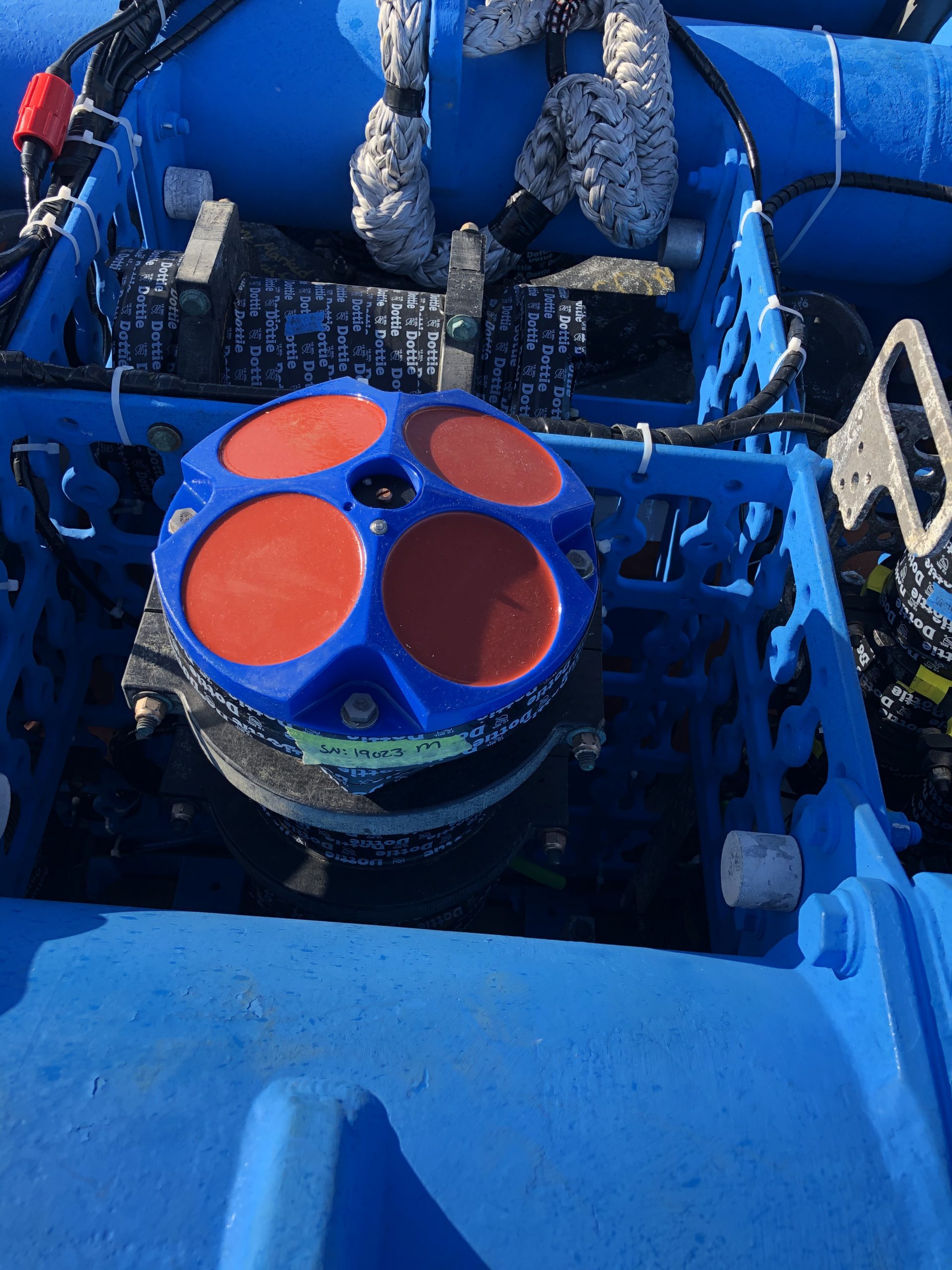 Biofouling is a real challenge to keeping equipment deployed in the ocean free functioning properly to deliver data to shore. The addition of UV light is helping to keep the oxygen optode sensors clear and recording data. Photo: Jon Fram, Oregon State University.[/caption]

Biofouling is a hazard of keeping equipment in the ocean for long periods of time, particularly when it is near the surface where photosynthesis occurs.  For OOI’s arrays that remain in the water for six months or longer, this is a pressing issue because of the need to ensure sensors can continue to collect and transmit data back to shore. The OOI scientists and engineers are always investigating ways to keep biofouling at bay.  They recently worked with Aanderaa, which provides OOI’s oxygen optode sensors, to implement a solution to keep oxygen sensors free of biofouling by installing ultra-violet (UV) lights that periodically shine on the instruments’ sensing foil.

As early as 2016, a team of OOI engineers and technicians from Oregon State University, the University of Washington, and Woods Hole Oceanographic Institution began to tackle some of problems with the instruments selected by OOI and to improve the quality of instrument measurements. In October of 2016 AML Oceanographic showed OOI’s instrument group data from Ocean Networks Canada of a UV light used to mitigate biofouling on Aanderaa’s oxygen optodes. The following October, OOI deployed a side-by-side test of two oxygen optodes (one with a UV light pointed at it) at seven meters depth on the Oregon Shelf Surface Mooring. Data from the two sensors tracked each other for six weeks, and then the unprotected sensor fouled. Within weeks, there were daily afternoon spikes of up to twice the oxygen level of the protected sensor, with slightly lower measurements than the unprotected sensor at night due to respiration of the biofilm. The team found that the biofouling signal wasn’t always as dramatic, nor did it always develop in the same period of time after deployment.  Physics has a hand in this, too.  Sometimes the fouling signal disappeared after a storm cleaned off the sensor.

In summer 2018, OOI started deploying UV-protected oxygen optodes mounted shallower than 70 meters on Surface Moorings. By mid-209, once some initial hardware and deployment issues were resolved, OOI expanded deployment of UV-antifouling from moored dissolved oxygen sensors, to the dissolved oxygen sensors on the Coastal Surface Piercing Profilers, and then to uncabled digital still cameras moored at less than 70 meters depth.

Following the success of the UV-light test on dissolved oxygen sensors, UV antifouling was tested on a moored Pioneer Array spectral irradiance (SPKIR) sensor in 2018.  Here too, the testing conducted with WET Labs, the SPKIR vendor, confirmed that the UV light did not damage the instrument’s optics. As a result, in 2019, all subsurface OOI spectral irradiance sensors on Surface Moorings were outfitted with UV-antifouling mitigation, as well as the Coastal Surface Piercing Profilers and uncabled digital still cameras moored at less than 70 meters. The team has adjusted the cycle of the UV lights so that they prevent biofouling without damaging the sensors, interfering with measurements, or utilizing too much power.

“While the solution appears simple, it was a long journey to find the right mix of equipment and duration of use to resolve the issue of biofouling for each sensor at each location, “explained Jonathan Fram, project manager for the Coastal Endurance Array at Oregon State University.  “An ongoing challenge is the intermittency of biofouling and the many forms it can take, which can make it difficult to properly diagnose the problem.  Usually biofouling is a slimy film, but sometimes it can be a barnacle or another large creature.”

“The use of UV-lights for biofouling mitigation, although well-known, cannot often be used due to the power required,“ added Sheri White, senior engineer at Woods Hole Oceanographic Institution, who was instrumental in moving this solution forward on the Pioneer Array. “We have the advantage of generating our own power, so that we are able to implement it on a number of optical instruments on our Surface Moorings.”

OOI continues to measure the impact of the UV light on biofouling.  While the results are clear that the UV lights increase measurement reliability and accuracy, the team is still trying to gauge the extent of the improvements. Data are annotated to indicate when UV-antifouling was used for each instrument deployment.