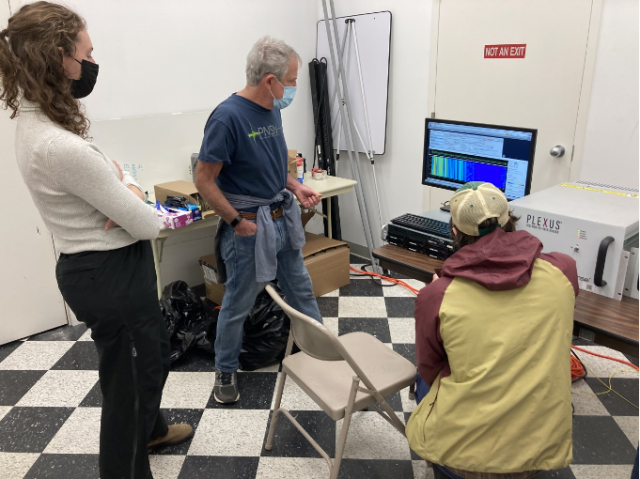 Researchers using the OOI Regional Cabled Array are at the forefront of testing Distributed Acoustic Sensing (DAS) along the seafloor through funding from the National Science Foundation. Ocean-bottom DAS using submarine fiber optic cables promises to advance what we know about marine geology, offshore earthquakes, ocean currents, ocean waves, sediment transport, marine mammals, and a host of other activities that now can be measured by this revolutionary technique.

Taking advantage of a rare temporary shutdown of RCA’s submarine fiber optic cables during a shore station maintenance period, University of Washington Researcher William Wilcock and California Institute of Technology (Caltech) Graduate Student in Geophysics Ethan Williams were part of a team of scientists who installed DAS interrogators on RCA’s “dark cables” to test and collect data for a community experiment.  The experiment was designed to determine the potential of submarine DAS to observe seismic, oceanographic, acoustic and geodetic processes.  Each interrogator transmitted laser pulses down the fiber optic cable from RCA’s shore station and across the offshore Cascadia Margin and recorded the echoes that came back. This backscatter remains constant until some movement on the bottom or in the water column perturbs the fibers in the cable, changing the pattern of backscattered light.  By rapidly probing the cable hundreds of times per second, DAS allows researchers to monitor what’s happening in the cable environment.

“Using DAS, the fiber optic cable acts, in effect, like a line of seismometers that can measure the stretching and contracting of the ground, “explained Wilcock. “It’s an amazing technology, similar to going out in the field and putting a seismic instrument every 10 meters for a stretch of 100 kilometers. So it’s just astounding in terms of what it can potentially measure,” said Wilcock.

The DAS system also has the capability of measuring other oceanographic signals.  “It turns out that ocean bottom acoustic sensing on these fiber optic cables is as sensitive to the water layer above as it is to the solid Earth below.  This sensitivity provides all sorts of really interesting signals that you would normally observe using an ocean bottom pressure sensor.  DAS is opening up the door for lots of interesting research opportunities,” said Williams, who has been working with DAS systems for years under the supervision of Zhongwen Zhan at Caltech, one of the world’s foremost experts in the field.

Among the many potential ways DAS data might be used include advancing earthquake and tsunami early warning systems, and understanding wave and current action, sediment transport, and ocean-generated seismic noise, as well as providing biological information.  In Wilcock’s case, he’s excited about using DAS to gain access to fin whale calls that were picked up by this DAS experiment.

The National Science Foundation funded this experiment in the hopes of developing protocols that can support the use of DAS for science and hazards mitigation in the Northeast Pacific while meeting national security requirements. The U.S. Navy conducted a preliminary review of the data and subsequently released the data for public use.  The data are being stored on RCA servers at the University of Washington.  Researchers will have ftp access to the data at this link.  But because the full data set is 26 terabytes, researchers can also email ooicable@uw.edu to arrange to provide disks that will be returned with data they are interested in.

Four days of continuous measurements in this dynamic offshore environment also offer a potential treasure trove of data.  Graduate student Williams is turning his attention to exploring these datasets and calibrating them against conventional measurements to better understand what some of the potential applications may be. “I’m very excited about the potential DAS brings to understanding what’s happening on the seafloor.  Having, in essence, so many seismometers on the ocean floor means that we can apply all sorts of array-based processing so we’re not only averaging in time, we’re combining information in space. And this allows a lot of really innovative things that we weren’t able to do before.”

“But the real value of these datasets comes from being an open dataset. It will be a great facilitator for learning with the potential to expand general knowledge about how to use DAS in the marine geology and marine geophysics world, which is great,” Williams added.

Both Wilcock and Williams were excited about the potential for DAS to open up understanding of the processes involved in this deep-sea world.  They both mentioned a dream of having DAS sensors integrated into future SMART cable technology to expand DAS use on land and in the sea.