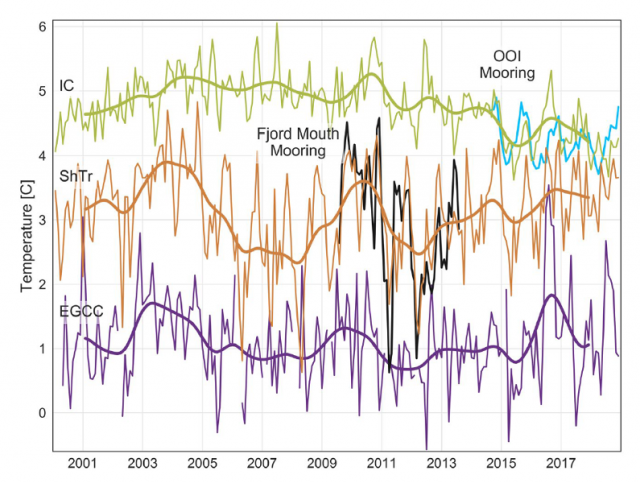 Deployed 140 miles east of the southern tip of Greenland and three miles south of the Arctic Circle, the Irminger Sea surface mooring floats on a cold empty sea named for a Danish naval admiral few people have heard of, in a location that few people could point to on a North Atlantic chart. The Irminger Sea is delineated less by coastlines or geographic basins and more by what is taking place within the deep ocean here, processes only visible with the aid of deep-sea instruments. To oceanographers and climate scientists the region is a confluence of ocean currents where heat carried from the topics gets extracted and cold water sinks into abyss like few other places worldwide and with climate-changing impacts.

Like most high-latitude oceans, storms are frequent and strong. Some storms migrate northeast from the mid-latitudes. Other storms are born here and then mature to impressively violent conditions influenced by the distant high mountains and massive Greenland icecap. Gale-force winds and steep-faced ocean waves spread east over a wide cone from the tip of Cape Farewell. The ice pack around Greenland ejects icebergs, some washing far out to sea where they threaten vessels. Cold air and sea spray build layers of heavy ice on exposed surfaces and instrument sensors. Other oceans can be found with higher waves, some have colder weather, but in few places do storms intensify so quickly, occur as often, and happen in a place so vital to planetary climate. Right where the storm forces are the strongest is also the perfect place for a tower packed with weather instruments.

The Irminger Sea mooring is designed to collect data in this stormy world where meteorological and ocean measurements, especially at the surface, are rare and hard to sustain. The mooring is recovered and a new one put in its place once a year, typically during the short summer month of July when weather conditions are calmest. At more than 4 meters high, the surface mooring tower is heavily instrumented with meteorological sensors and communication antennas, and the surface float is filled with data loggers and redundant computing elements and controllers that collect, store, and transmit data to shore. In total about four tons of floating equipment is anchored to the bottom by a 1.5-mile cable studded with dozens of instruments sampling the deep interior of this sea. To power everything, the buoy float is packed with rechargeable batteries, fueled by solar panels and wind turbines on the buoy tower. Strong winds are usually welcome because they rapidly re-charge the battery packs. Sometimes, however, these can be too much of a good thing.

A recent storm during October 18-19, 2021, was one such time. The mooring was battered by wind speeds exceeding 35 knots (gale force) for almost 24 hours, with some topping out above 50 knots. Heavy storm seas built up and stacked upon themselves for hours. At the storm’s peak, about one third of the highest waves were above 15 m (49 ft). Picture heaving an 8000 lb. surface mooring 80 ft up and down on a tilt-a-whirl ride that never stops. Waves this high can bring tons of water crashing down.  Towering waves were recorded, some reaching up to 20-25 m (66-82 ft), so high they approached the limits of our instruments.

The Irminger Sea continues to test our ability to “weather harden” instruments in stormy parts of the world. From November to March, daylight is fleeting, the sun hovers near the horizon and solar panels trickle out only a few milliamps. For the next few months, many of the instruments in the ocean interior and on the tower will continue to sample, each instrument powered by its own small battery. The Irminger surface mooring will communicate once each day, a tiny burst of data with vital signs, until spring returns and the sun revives the cold battery packs.

The 2021 storm demonstrated, yet again, the challenges of working in the Irminger Sea. Yet, it also demonstrated the remarkable robustness of the OOI moorings in such extreme conditions. Ocean and meteorological measurements gathered by the Irminger Sea mooring during such storm events are extremely valuable for understanding oceanography and climate processes. Equally important is the invaluable experience gained that will drive continued improvement in the accuracy and durability of instruments deployed under such extreme conditions, with consequent increases in knowledge. 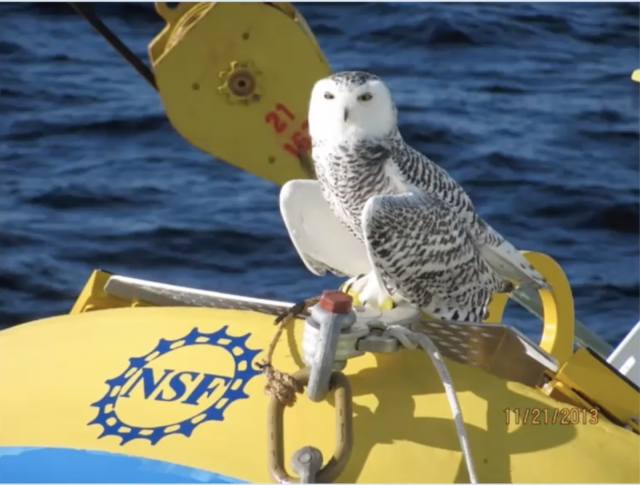 After a three-day weather delay, on Friday 29 October, the 14-member Pioneer Array science party will board the R/V Neil Armstrong in Woods Hole, MA and head toward the array, 75 nautical miles south of Martha’s Vineyard. The team will recover and deploy moorings and instrumentation to keep the array operational, collecting and sending data back to shore.

What’s novel about this mission is not only is it the 17th time the array will have been “turned,” but this time, you can follow along.  Bookmark this link for regular updates of progress, conditions, and life at sea. The team promises a good ride along. 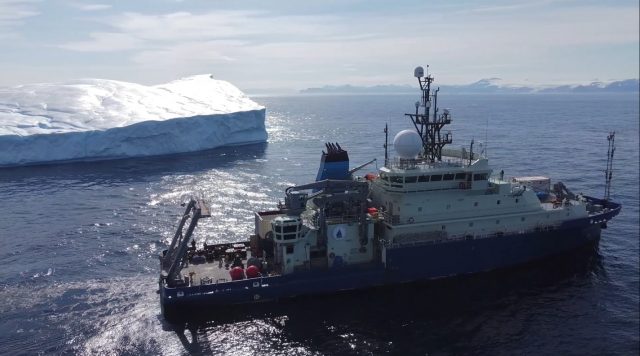 The Irminger 8 Team successfully wrapped up the eighth turn of the Global Irminger Sea Array on 26 August when the R/V Neil Armstrong docked in Reykjavik, Iceland. After a few days of demobilization, the 10 members of the science party were free to head home after showing proof of a negative COVID test 72 hours before boarding a flight back to the U.S.

Chief Scientist John Lund led the science party of 10 in completing all of the expedition’s objectives. Over the course of 26 days at sea, they recovered four moorings and deployed four new moorings in their place. The team also deployed three gliders—two Open Ocean and one Profiling—and recovered a glider that had been in the water since 2020 and whose battery supply was rapidly depleting.

One highlight of the trip was engaging in scientific outreach with a class of fourth graders. The team connected with the students while out on the open ocean via Zoom. The oceanographers aboard the ship each had a chance to share what it’s like being on an oceanographic voyage and explain the purpose of the different instruments and sensors on the arrays. Another highlight of the expedition was the OOI team’s ongoing collaboration with OSNAP (Overturning in the Subpolar North Atlantic Program). While OSNAP participants were not onboard the Armstrong as in the past, their shore-based presence was clearly in evidence.  Expert hydrographer Leah McRaven worked with the onboard team to adjust CTD (Conductivity, temperature, depth) sampling to ensure that new CTD equipment was calibrated and sampling properly.

The science team also added a novel twist to the regular shipboard sampling that supports field calibration and validation of the platforms and sensors in the arrays. During Irminger 8, the shipboard team worked with OOI’s onshore data team to make collected CTD data available online in near real-time. As an added bonus, McRaven shared her insights about CTD sampling in regular blog posts here.

The Irminger 8 Team took full advantage of being in this critical ocean region, which is sensitive to climate change. During transit from Woods Hole to the array, off the southeast coast of Greenland, the team deployed surface drifters and ARGO floats for the Greenland Freshwater Project, which is studying the impact of freshwater runoff from Greenland’s melting ice sheet on the North Atlantic and Arctic climate. The team also deployed a biogeochemical ARGO float for the Global Ocean Biogeochemistry Project, and took a series of CTD casts on behalf of OSNAP, to add to long term data collection efforts in this critical region. In addition, the team deployed two RAFOS floats for the Madagascar Basin Project to measure deep water circulation and 15 Sofar Spotter buoys to measure wind, wave, and temperature data.

“In the ideal, science is a collaborative process,” said Chief Scientist John Lund. “During transit time to and from the array, we were able to help our scientific partners get their equipment in the water. The data provided will help advance understanding of this critically important region, which is equally difficult to sample. The region has high winds, large, steep waves, strong currents, icebergs, and consequent equipment icing.”

Given the challenges of the ocean environment at these latitudes, the eighth turn of Irminger Array included equipment improvements. The newly deployed surface moorings included wind turbine modifications to help it withstand strong, volatile winds, and it also incorporated other structural modifications to strengthen the mooring, while easing refurbishment. Similarly, design modifications were made to the subsurface moorings to help ensure consistent, long-term data collection.

The team experienced some of these challenges of high winds and strong waves while on the cruise, but the rough conditions were compensated by the gorgeous scenery of the region. Added Lund, “One afternoon, the sun came out as the ship transited further up Prince Christian Sound. Everyone was awed by the beauty of the landscape. We saw glaciers, icebergs and the occasional whale.”

Prior to leaving the Sound, the team secured all the items for the transit to Reykjavik, the demobilization of the ship, and finally the journey home to Woods Hole.

In case you missed it, here’s another chance to join the leaders of the Coastal and Global Scale Node (CGSN) team to hear them describe the infrastructure making up the CGSN arrays, the current status of deployment, and how researchers and educators can get involved with the OOI.